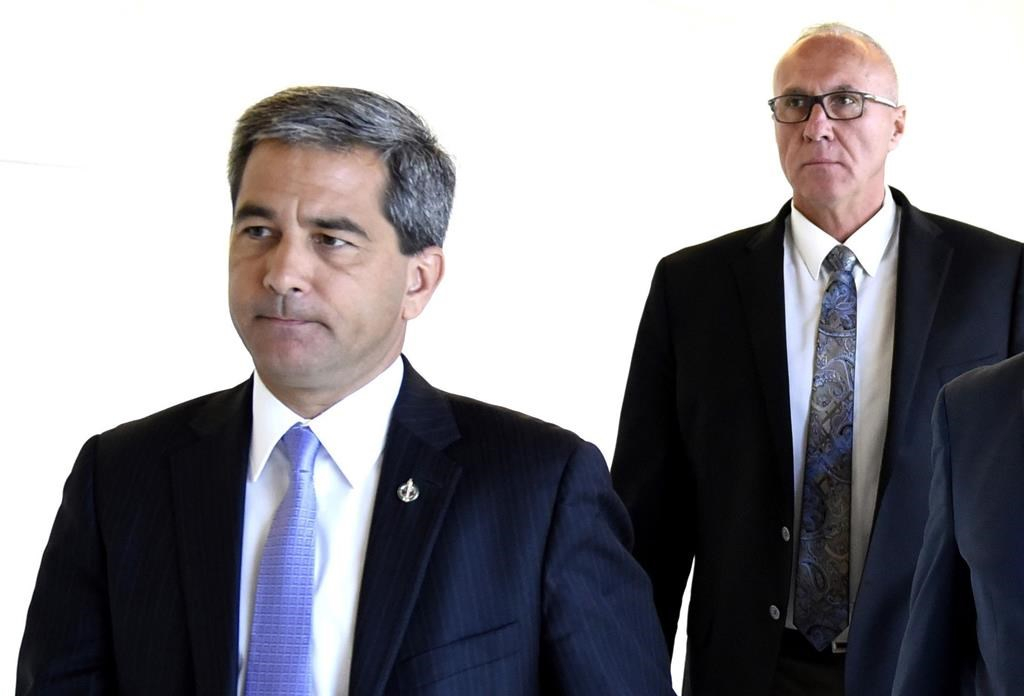 Conservative MPs Pierre Paul-Hus, left, and Glen Motz arrive for a meeting of the Standing Committee on Public Safety and National Security in Ottawa on Monday, July 15, 2019. File photo by The Canadian Press/Justin Tang
Previous story

The Conservatives want to know what federal officials are doing about China's alleged involvement in stealing data from thousands of Canadians.

In a letter to Prime Minister Justin Trudeau, two Conservative MPs say it is extremely worrisome that members of the Chinese People's Liberation Army stand accused of the high-profile 2017 hack of Equifax.

The U.S. Department of Justice announced Monday that a federal grand jury had returned an indictment charging four members of the PLA with hacking into the credit-reporting agency's computer systems and stealing data and trade secrets.

The nine-count indictment alleges the four were members of the PLA's 54th Research Institute, a wing of the Chinese military.

Hackers accessed the personal information of 145.5 million Americans and hundreds of thousands of Britons in the incident.

The breach also involved the information of about 19,000 Canadians, including names, addresses, social-insurance numbers and credit-card numbers as well as usernames, passwords and security-question data.

Pierre Paul-Hus and Glen Motz, the Conservative public safety critics, want Trudeau to explain what Canada will do to ensure those who pilfered Canadians' data are brought to justice.

"If this charge is proven in court, it would mean that the PLA conducted a deliberate, state-sponsored, cyberattack against Canadians, in order to steal their personal information," the letter says.

"In a digital age, Canadians must be assured that their personal information will be safe, and that the Canadian government will protect them from foreign actors that engage in hacking, espionage and other cybercrimes to collect this information."

The MPs are asking whether Canada has investigated the alleged PLA link to the cyberattack and if it will charge Chinese members in connection with the incident.

The Prime Minister's Office referred an inquiry to the office of Public Safety Minister Bill Blair.

The Equifax data compromise took place on American servers and has been investigated by the U.S. Federal Bureau of Investigation, said Mary-Liz Power, a spokeswoman for Blair. The RCMP works closely with law-enforcement partners internationally, she added.

The Liberal government has put hundreds of millions of dollars toward the federal Canadian Centre for Cyber Security and the RCMP's National Cybercrime Co-ordination Unit, Power noted.

Federal advisers have told Trudeau that Canada will work with allies to strike back at foreign cyberattackers and "impose costs" that make them understand the price of their deeds.

Rules and norms in cyberspace are critical, but must be supplemented with measures against hostile actors, says the note, obtained by The Canadian Press through the Access to Information Act.

Canada and its allies consider malicious cyberactivities to be a major threat and believe perpetrators will change their behaviour "only when the costs outweigh the benefits," the note adds.

This report by The Canadian Press was first published Feb. 11, 2020.