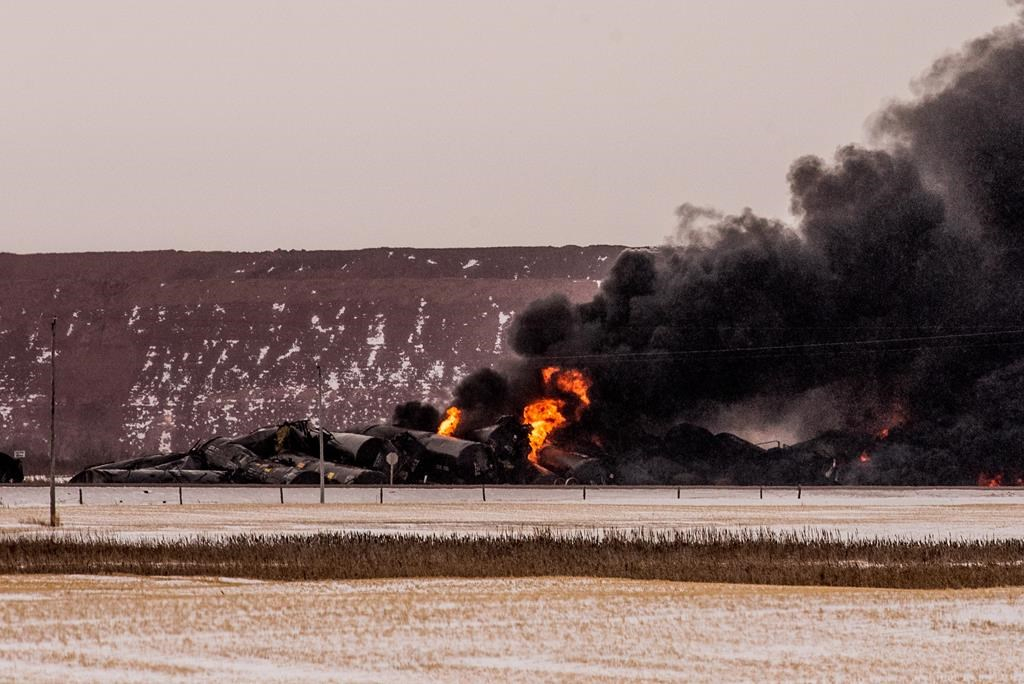 Smoke billows up from a derailed Canadian Pacific Railway train near Guernsey, Sask., on February 6, 2020. File photo by The Canadian Press/Matt Smith
Previous story
Next story

Both of Canada's major railways are restricting permits for shipping dangerous goods after a fiery train derailment last week in Saskatchewan that spilled about 1.2 million litres of oil.

The province's Environment Ministry confirmed the amount of the spill in an email Tuesday. It said it was still being determined how much oil was recovered, but noted a significant portion had burned off.

Some 32 of 104 cars derailed and a dozen caught fire when a CP freight train jumped the tracks near Guernsey, about 115 kilometres southeast of Saskatoon, last Thursday.

Flames and thick black smoke poured from the crumpled train cars and 85 residents had to evacuate the area for more than 24 hours.

The rail line was reopened Friday.

Reeve Jack Gibney of the Rural Municipality of Usborne, which includes Guernsey, said there is concern in the agriculture community over the second major oil spill in two months.

Another derailment in December about 10 kilometres away on the same set of tracks also caused a fire when 1.5 million litres of oil spilled.

The rural municipality was to meet with CP officials Wednesday.

Local leaders have said people are worried about the safety of rail transport for oil and have suggested it's time to look to pipelines. Trains, often carrying oil and other dangerous goods, move through the Saskatchewan hamlet every hour, Gibney has said.

In response, Canadian Pacific Railway and Canadian National Railway informed customers that they are limiting permits for shipments of dangerous goods, such as oil.

A bulletin from CP to its customers on Sunday said it would start limiting the permits Wednesday.

"We do not take these measures lightly and while it is too soon to quantify the impact, these actions are necessary given the multitude of variables and interdependencies involved in network operations," John Brooks, CP’s chief marketing officer, said in the memo.

Shippers should not react by adding more private rail cars, because that would impede recovery, he added.

Protests over a major natural gas pipeline project in British Columbia are also affecting the country's rail network. CN said blockades on its lines could lead to the rail carrier closing significant parts of its network.

Remediation efforts are underway at the site of the most recent derailment in Saskatchewan, the provincial government said.

The Transportation Safety Board said Tuesday that its investigators continue to work at the site. CP said in an emailed statement that crews were working to ensure the area was cleaned up and restored.

CP has contracted environmental consultants and contractors to assess any environmental impacts. The province said the rail company is responsible for all costs associated with the derailment, emergency response and remediation.

The province said the spill was fully contained to railway and highway ditches, and the frozen ground helped reduce the risk of contaminants penetrating too far down.

CP has also confirmed the tank cars involved were TC-117J types, which became the industry standard following the phaseout of the DOT-111 cars involved in the deadly rail disaster in Lac-Megantic, Que., in 2013. Forty-seven people were killed when tanker cars loaded with crude oil derailed and caused an explosion.

The TC-117 cars have additional safety features including thicker steel and thermal protection.

A retrofitted version of the TC-117 tank type was involved in crashes and subsequent oil leaks in the December derailment in Saskatchewan, as well as in other recent accidents in St. Lazare, Man., Iowa and Texas. It has a thinner shell than newer models.