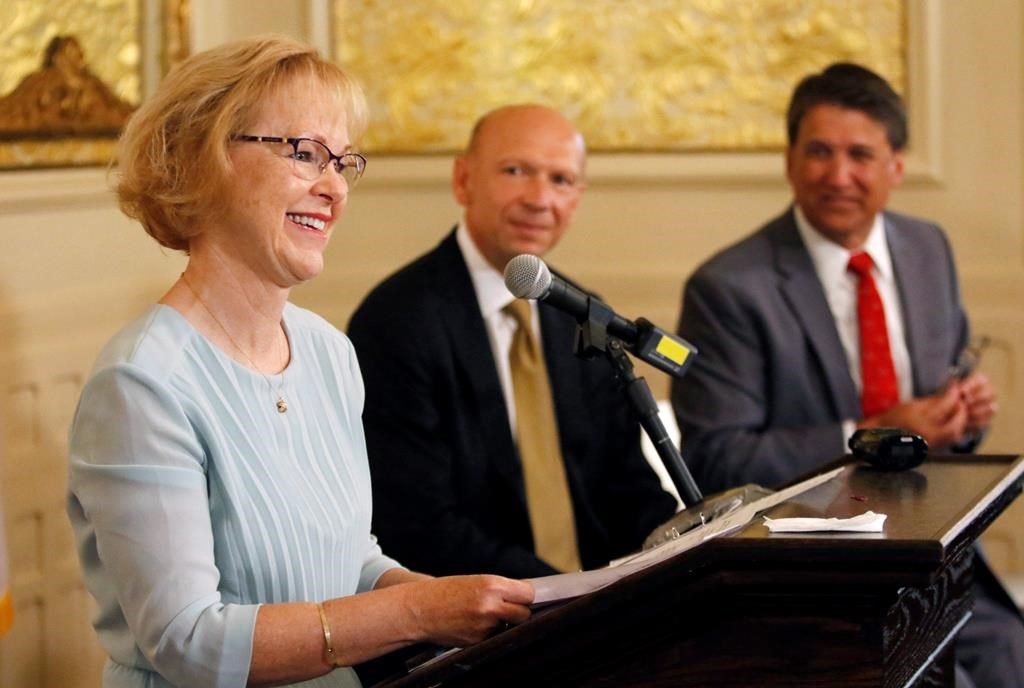 Dr. Aldona Wos thanks her DHHS staffers in the audience for their hard work as Rick Brajer and Gov. Pat McCrory listen during a press conference on Aug. 5, 2015, at the Governor's Mansion in Raleigh, NC. File photo by The Associated Press/Harry Lynch
Previous story
Next story

Aldona Z. Wos, a former Manhattan physician, Republican fundraiser and North Carolina lawmaker who once was George W. Bush's ambassador to Estonia, has been nominated by President Donald Trump as the next American emissary to Canada, the White House announced Tuesday.

Once confirmed by the U.S. Senate, Wos — currently the vice-chair of the president’s commission on White House fellowships — would succeed former ambassador Kelly Craft, who decamped in August to become Trump's envoy to the United Nations.

In addition to her time as a diplomat and a high-powered fundraiser for Bush, Wos earned her political stripes around the cabinet table in North Carolina as the state's secretary of health and human services before stepping down in 2015.

She also serves on the Duke University law school board of visitors, the board of directors of the Council of American Ambassadors and the Institute of World Politics.

Wos, who was born in Poland and whose parents endured being held in concentration camps during the Second World War, also sits on the board of the Victims of Communism Memorial Foundation and was a member of the United States Holocaust Memorial Museum Council.

While the timing of her Senate confirmation remains to be determined, the nomination could help push Prime Minister Justin Trudeau toward appointing a permanent Canadian ambassador to the U.S., where Kirsten Hillman has been serving as acting ambassador since David MacNaughton resigned the post last summer.

Speculation about MacNaughton's ultimate successor has been rampant for months. MacNaughton himself has reportedly urged Trudeau to appoint Hillman, a lawyer and long-time diplomat who played a pivotal role as deputy ambassador during the year-long NAFTA negotiations and took part in last month's Liberal cabinet retreat in Winnipeg.

"Kirsten Hillman has been — I think it would be fair to even call her a friend," Deputy Prime Minister Chrystia Freeland told a news conference last week in Washington.

"Canada is lucky to have such a talented woman working in our public service, and it has been a real pleasure for me to work directly with her today, and it's a pleasure for me as deputy prime minister working on the Canada-U.S. relationship to work very closely with Kirsten every day."

This report by The Canadian Press was first published Feb. 11, 2020.