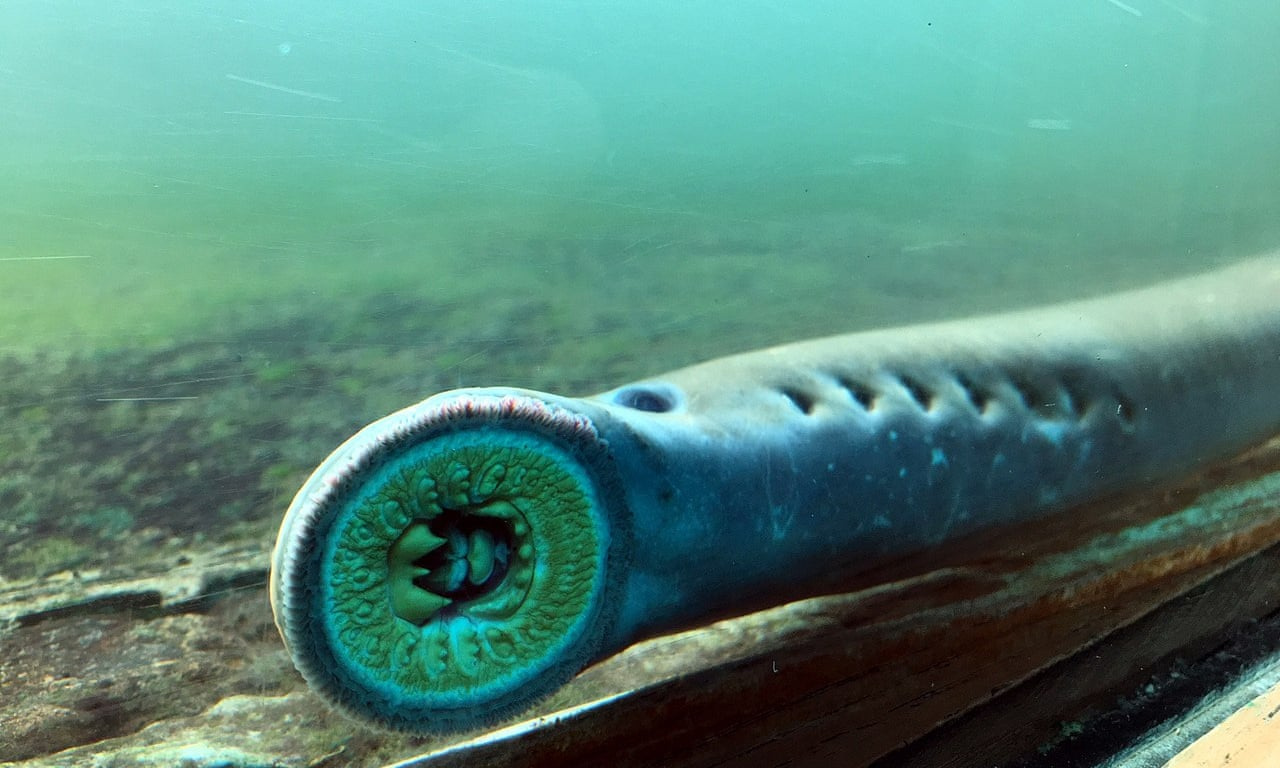 The Pacific lamprey – a jawless fish that looks like an eel – is considered a ‘first food’ by the Cayuse, Umatilla and Walla Walla tribes, as it was a key element of their ancestors’ diet. Photograph: Fredlyfish4/Wikimedia Commons
Previous story

A pioneering tribal biodiversity project to restore the sacred Pacific lamprey population has been dealt a major blow after huge floods washed away hundreds of fish before they could be released into the wild.

The Confederated Tribes of the Umatilla Indian Reservation (CTUIR) have spent two decades reintroducing the lamprey into tributaries of the Columbia River after US government dams and industrial fishing wiped out the endemic species.

The Pacific lamprey – a jawless fish that looks like an eel – is considered a “first food” by the Cayuse, Umatilla and Walla Walla tribes, which make up the confederation, as it was a key element of their ancestors’ diet.

The seven gill ports on each side of the lamprey are tied to the seven drums and seven generations considered sacred to the tribes.

The 500,000-acre Umatilla reservation, located about 220 miles east of Portland, Oregon, was inundated last Thursday after sudden unseasonably hot weather caused large quantities of snow on the Blue Mountains to rapidly melt. The climate crisis is causing increased flooding in many areas as the planet warms and disrupts weather patterns.

The water gained force as it ran into the Umatilla River, where about a thousand adult lamprey were enclosed in tanks within a caged acclimatization facility, waiting to be released into the nearby Grande Ronde River.

The force of the river overwhelmed the cage, and the tanks were sent floating downstream, according to Aaron Jackson, director of the lamprey project for the Umatilla tribes fisheries’ programme.

Several tanks were found with their doors open, which means the fish escaped. The fish were yet to be genetically marked, so the tribe has no way of tracking them.

Two other tanks have since been located several miles downstream; 20 stressed but living fish were found in one, 34 in another. The rest were dead. At least 250 fish and two tanks are still unaccounted for.

“We’ve lost the entire 2020 allocation for the Grande Ronde River, as even those we found alive were so stressed, we put them into the Utamilla straight away,” said Jackson.

“But the fact that any survived … its times like these that the lamprey shows us how strong they are.”

The Cayuse, Umatilla and Walla Walla tribes have lived in the area now known as northeastern Oregon and south-eastern Washington for more than 10,000 years, moving around to fish, hunt and gather food from the Columbia River basin and the Blue Mountains. The tribes were forced onto the Umatilla reservation upon signing the 1855 treaty, after which the federal government appropriated increasing swathes of land and waterways for industry and settlers.

In the late 1960s and early 70s, a state industrial fishing programme poisoned the Utamilla River and wiped out endemic species including the lamprey, which washed up dead along the bank.

The successful project recently expanded to the Grande Ronde River, but was still in the early stages when the floods struck.

Brenda Ekwurzel, director of climate science at the Union of Concerned Scientists, said the loss of the lamprey was a tragic consequence of global heating. “The climate crisis is already leading to dangerous extreme events which are overwhelming infrastructure and impacting on people’s way of life.”

Last week’s floods forcibly displaced at least 20 Native American families after water and mud engulfed their homes. Numerous roads and bridges on the reservation are badly damaged and impassable even though the flood waters have begun to subside, Kathryn Brigham, chairwoman of the CTUIR trust board, said.

Every single state in the continental US experienced higher than average temperatures in December and January. In the Pacific north-west, Oregon had above average rainfall, while in Washington it was “much above average”.

The CTUIR and the state of Oregon have both declared a state of emergency.