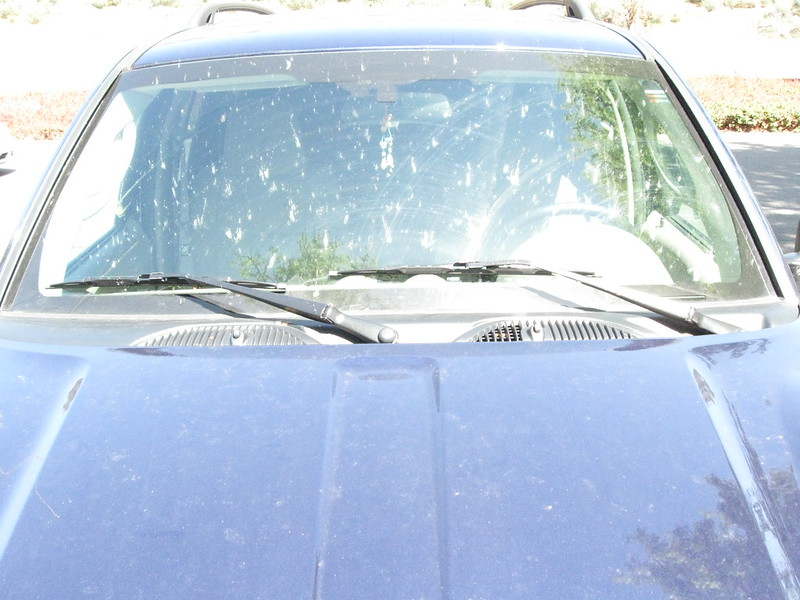 Two scientific studies of the number of insects splattered by cars have revealed a huge decline in abundance at European sites in two decades.

The research adds to growing evidence of what some scientists have called an “insect apocalypse”, which is threatening a collapse in the natural world that sustains humans and all life on Earth. A third study shows plummeting numbers of aquatic insects in streams.

The survey of insects hitting car windscreens in rural Denmark used data collected every summer from 1997 to 2017 and found an 80% decline in abundance. It also found a parallel decline in the number of swallows and martins, birds that live on insects.

The second survey, in the UK county of Kent in 2019, examined splats in a grid placed over car registration plates, known as a “splatometer”. This revealed 50% fewer impacts than in 2004. The research included vintage cars up to 70 years old to see if their less aerodynamic shape meant they killed more bugs, but it found that modern cars actually hit slightly more insects.

“This difference we found is critically important, because it mirrors the patterns of decline which are being reported widely elsewhere, and insects are absolutely fundamental to food webs and the existence of life on Earth,” said Paul Tinsley-Marshall from Kent Wildlife Trust. “It’s pretty horrendous.”

“Most naturalists who are out in nature have seen this coming over a long time,” said Anders Pape Møllerfrom the Paris-Sud University in France, who has been visiting the Danish study area for 50 years. “My colleagues remember going on summer holidays as children and their parents had to stop their car to clean the windscreen so they could continue. This is certainly not a problem any more.”

Insect population collapses have been reported in Germany and Puerto Rico, and the first global scientific review, published in February 2019, said widespread declines threatened to cause a “catastrophic collapse of nature’s ecosystems”. Insects pollinate three-quarters of crops and another recent study showed widespread losses of such insects across Britain.

The causes of decline are the destruction of natural habitat, pesticides and the impacts of the climate crisis. Light pollution has also been cited as a key “bringer of insect apocalypse”.

The survey in Kent analysed nearly 700 car journeys reported by volunteers from June to August 2019. The bug splats on the registration plate were counted to calculate the number of impacts per kilometre. This was 50% lower than an RSPB survey using the same methodology found in 2004.

“The most surprising thing was how rarely we actually found anything on the plate at all,” said Tinsley-Marshall. This was despite the data showing that modern cars hit more bugs, perhaps because older models push a bigger layer of air – and insects – over the vehicle.

The Danish research, published in the journal Ecology and Evolution, used data from an average of 65 car journeys a year on the same stretch of road and at the same speed between 1997 and 2017. Møller took account of the time of day, temperature, wind speed and date of the journey and found an 80% decline in insect abundance over the 21-year period. Checks using insect nets and sticky traps showed the same trend.

Møller said the causes were likely to be “a bit of everything”, but noted significant changes due to global heating. “In my 50 years, the temperature in April, May and June has increased by 1.5C [2.7F] on average in my study area,” he said. “The amount of rain has increased by 50%. We are talking about dramatic differences.”

The stream research, published in the journal Conservation Biology, analysed weekly data from 1969 to 2010 on a stream in a German nature reserve, where the only major human impact is climate change.

“Overall, water temperature increased by 1.88C and discharge patterns changed significantly. These changes were accompanied by an 81.6% decline in insect abundance,” the scientists reported. “Our results indicate that climate change has already altered [wildlife] communities severely, even in protected areas.”

Matt Shardlow, the chief executive of the charity Buglife, said: “These new studies reinforce our understanding of the dangerously rapid disappearance of insect life in both the air and water. It is becoming clear that the four horsemen of the insect apocalypse are climate change, habitat destruction, habitat fragmentation and pollution. It is essential we create more joined up space for insects that is safe from pesticides, climate change and other harm.”

Most scientific research to date has shown serious declines in the number of insects in the places studied. “There is no doubt about this,” said Møller. “What there is slight doubt about is the extent to which this occurs across geographical and temporal scales.”

Long-term studies are rare and mostly from Europe and North America, with a few ranging from Australia to China and Brazil to South Africa, but hardly any elsewhere. There has also been discussion about the best methodologies among researchers.

“But that is not the main point,” said Tinsley-Marshall. “I think it’s pretty clear that something pretty catastrophic is going on.” Kent Wildlife Trust is now working on a smartphone app to make it easier for volunteers to provide insect splat data.

I'm old enough to remember my

I'm old enough to remember my father, on drives to our summer vacations in the New England mountains, having to stop at regular ilntervals to scrub and scrape the insects off the windshields of his pre-war and post war vehicles - that compared to modern cars - were so underpowered he had to shift into lower gears to make it up the two lane rural roads through the mountains. Once we left the metro New York City area we were in the heart of the rural east coast, with far more tree and other vegetative cover. Those same roads today are four to six lanes wide, and lined with asphalted malls and industrial development. None of which is conducive to insect life. In my current cross country travels it is surprisingly rare to be "plastered" with insects.

'Moving away from the fear factor:' Bringing insects into mainstream diets