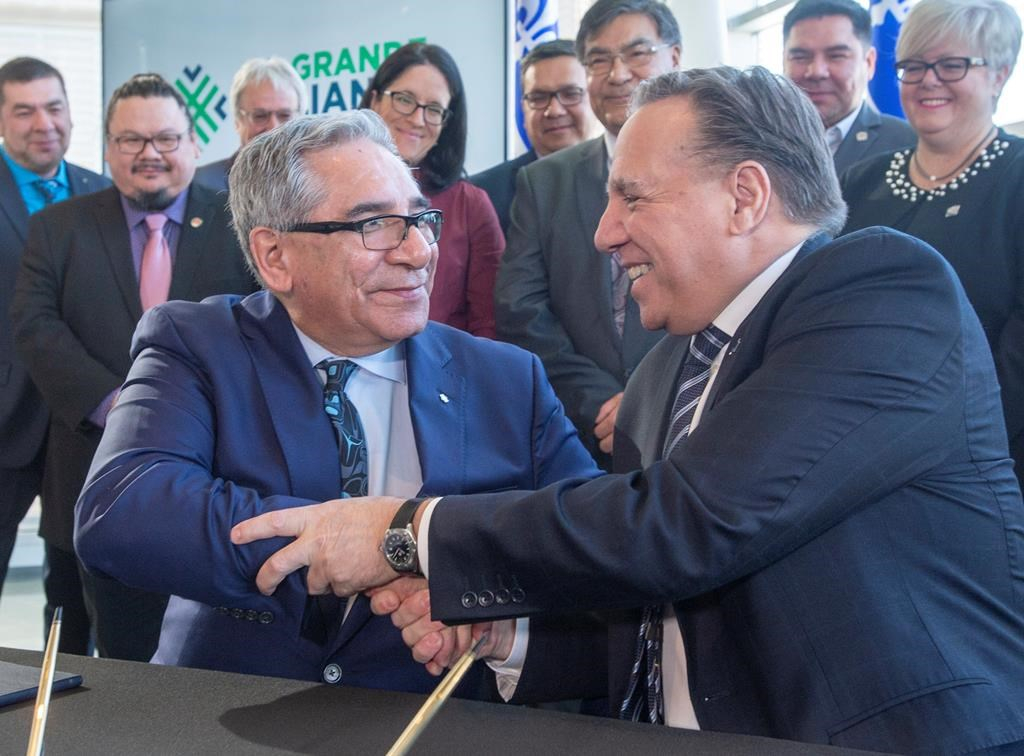 Francois Legault, right, shakes hands with Abel Bosum after signing a Memorandum of Understanding on collaborative, long-term economic development at a news conference on Feb. 17, 2020 in Montreal. Photo by The Canadian Press/Ryan Remiorz
Previous story
Next story

As Indigenous-led, anti-pipeline protests have shut down rail service across much of the country, Quebec and Cree leaders announced Monday the first steps of a wide-ranging 30-year plan to further develop the province's northern territory together.

Premier Francois Legault told reporters he has been assured the initiative has the consent of the broader Cree community, in contrast, he said, to a natural gas pipeline proposal in British Columbia that has divided First Nations peoples and triggered widespread protests.

Legault was joined by Abel Bosum, Grand Chief of the Grand Council of the Crees, as well as by several other Quebec ministers and Cree representatives. They announced a multi-million dollar feasibility study that will look into developing the James Bay territory, with costs split equally between the Quebec and Cree governments.

Just one potential project, to expand the northern rail system and facilitate lithium mining and transport, is evaluated at $4.6 billion.

The premier called Monday's announcement "a historic moment between the Cree nation and the Quebec nation." He said the agreement was the natural continuation of the 2002 Peace of the Braves, a landmark economic development deal between Quebec and the Cree that ended years of conflict.

Grand Chief Bosum said the Cree Nation wasn't making any sacrifices to sign the agreement, nor was it making any concessions or difficult compromises.

Throughout the news conference, Legault repeatedly noted that the agreement has the support of the Cree people, not just the community's leaders. He was referencing the opposition to the planned construction of a $6.6-billion natural-gas pipeline in northern British Columbia called Coastal GasLink.

Coastal GasLink signed agreements with all 20 elected band councils along the pipeline route, including the Wet'suwet'en First Nation's council. But Wet'suwet'en's hereditary chiefs are opposed to the project and say the council does not have authority over the relevant land. Protests in support of the Wet'suwet'en's hereditary chiefs have sprung up in Indigenous communities across Canada as well as among non-Indigenous people.

"This morning, the chiefs are here," Legault said. "Mr. Bosum showed a lot of leadership. This is a project that we've been working on for a while, long before this current conflict on the rail lines."

Aside from the rail network expansion, Legault and Bosum say the study will analyze other potential initiatives on the northern James Bay territory, also known as Eeyou Istchee, such as electrifying industrial installations and developing the local labour force.

They say the study will consider projects over the next three decades and will also identify new sites designated for environmental protection.

This report from The Canadian Press was first published Feb. 17, 2020.

Given the way Quebec's

Given the way Quebec's indigenous peoples have been treated by successive governments in general, and mistreated systemically by the province's police forces, it appears that the Cree have cannily decided that the only way to effectively assert themselves is to get a decent share of the prosperity northern development will create, with or without them.

It makes sense to be on the "with" side. Money speaks with a very big stick, to mix a metaphore. From the inside they may have a better chance of imposing some sanity on "development" and insist on effective (industry funded) remediation of the lands industry will destroy.

All this is moot, of course, if climate disasters render the lands in question unfit for "development" - let alone habitation by man or beast.