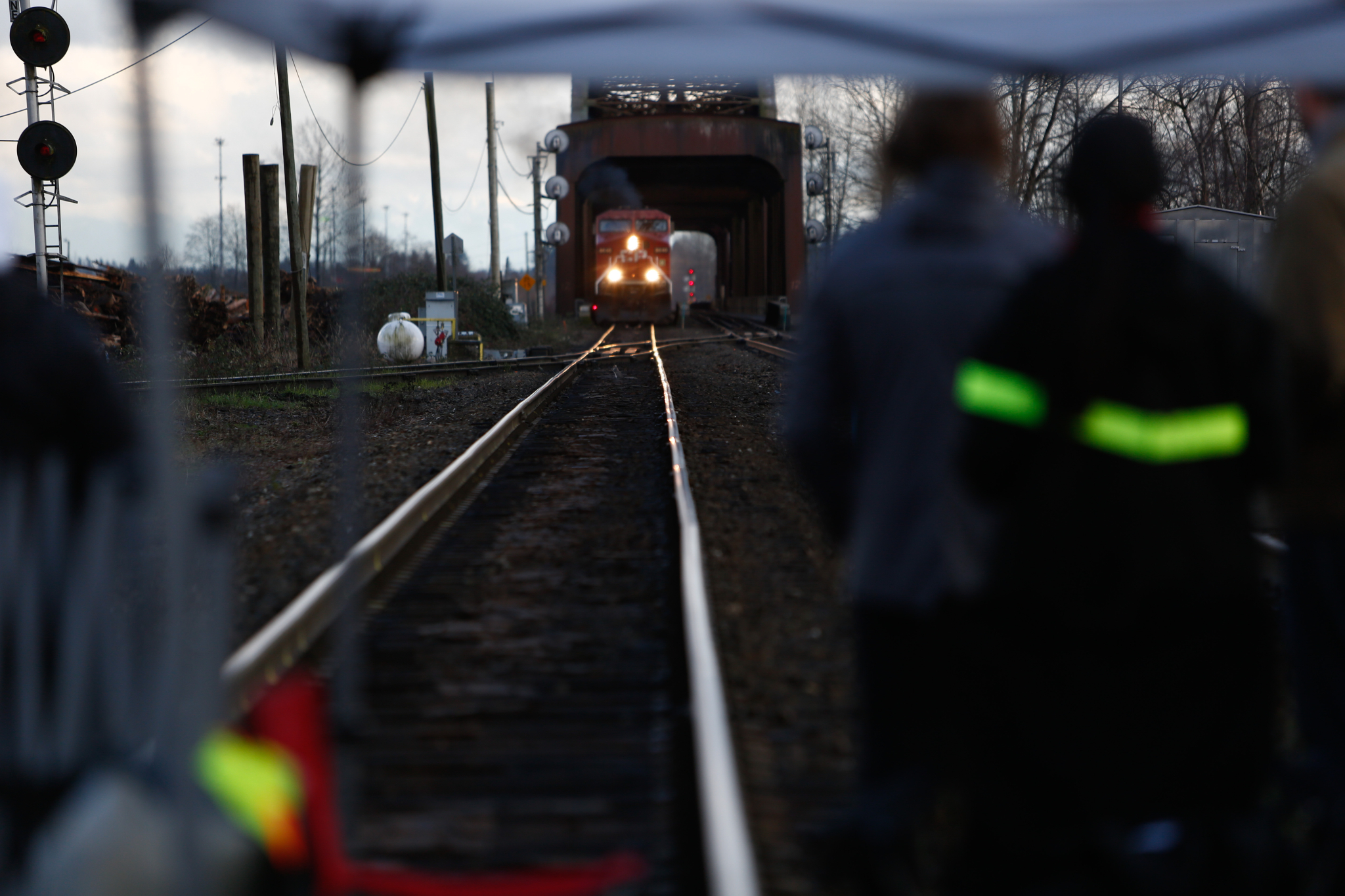 The RCMP have offered to leave a disputed area of Wet’suwet’en territory in northern British Columbia, the primary demand of several groups blockading railways in solidarity with the First Nation.

“I think now the circumstances are such that those barricades should come down,” federal Public Safety Minister Bill Blair told reporters on Parliament Hill Thursday.

The blockades, which have paralyzed the Canadian economy for the past two weeks, were sparked after RCMP raided Wet’suwet’en camps along a remote forest road in northern B.C. earlier this month to clear the path of the Coastal GasLink pipeline. The Wet’suwet’en hereditary chiefs oppose the planned project, which would run through the nation’s unceded traditional territory.

The hereditary chiefs have said they will not meet with provincial and federal ministers to discuss the situation until the RCMP leave a temporary detachment along the forest road. Getting the RCMP off the disputed area in Wet’suwet’en territory is also a key demand of the Mohawks of Tyendinaga, who have set up a pivotal rail blockade near Belleville, Ont., cutting off rail service to most of eastern Canada.

Meanwhile, other blockades have popped up in cities across Canada.

On Thursday, Blair said the RCMP have offered to leave that temporary detachment near the Wet’suwet’en camps and work from the nearby town of Houston, B.C. But that offer is dependent on the condition that the forest road ⁠— which Coastal GasLink needs to access for pre-construction work on the pipeline ⁠— remains clear.

The offer from police could signal the beginning of a possible resolution to the rail blockades, but it also wasn’t immediately clear whether it would be enough. The condition to keep the road open could be a potential obstacle, as could the fact that the Wet’suwet’en hereditary chiefs are also asking the provincial government to withdraw its approval of the Coastal GasLink pipeline.

The Wet'suwet'en hereditary chiefs and the Mohawks of Tyendinaga didn't immediately respond publicly to the RCMP's move. Several hereditary chiefs are currently in eastern Canada, slated to meet with Mohawk representatives Friday morning.

Minister of Indigenous Services Marc Miller said the federal government’s latest request to meet with the hereditary chiefs and Mohawk leaders hasn’t yet been answered. The government is hoping to talk as “early as tonight, reasonably tomorrow morning,” he said.

“(Minister of Crown-Indigenous Relations Carolyn Bennett) and I stand ready to go on a moment’s notice,” Miller added.

“I think now the circumstances are such that those barricades should come down,” federal Public Safety Minister Bill Blair said.

Bennett has been seeking a meeting with the Wet’suwet’en hereditary chiefs, while Miller has met with Mohawk leadership. While the two have similar roles in cabinet, Miller’s ministry provides services to First Nations that aren’t self-governing, while Bennett is tasked with nation-to-nation relationship building.

In response to a questionThursday about whether the federal government would intervene to remove Coastal GasLink from Wet’swet’en territory, Bennett said “that is not my responsibility.”

Blair acknowledged that not all the Wet’suwet’en demands had been met, but said the situation is “moving towards a less confrontational and a more peaceable arrangement.”

“I'm very hopeful that will satisfy the concerns that were raised,” he added.

Blair has previously said the federal government would not call off the RCMP, which is enforcing a court injunction to force the Wet’suwet’en and their supporters out of several camps blocking the path of Coastal GasLink.

On Thursday, he said the RCMP made the decision themselves and it was the “right one.”

Here in #Vancouver, it’s ten o’clock at night and one of the city’s biggest intersections is filled with drumming, song, a fire, sage, several hundred people, and love.

Thursday marked 15 days of rail blockades. As backups of rail shipping continued to pile up this week, industry groups got increasingly vocal, upping the pressure on federal officials to act.

Last week, CN Rail shut down operations on nearly all of its eastern Canada network, halting everything east of Toronto. VIA Rail, which uses CN tracks, cancelled trains indefinitely. Both companies have also announced temporary layoffs: CN gave pink slips to 450 employees, while VIA laid off nearly 1,000.

The blockades have also held up shipments of everything from the chlorine used to treat drinking water to groceries, putting Atlantic Canada in particular at risk of shortages. Meanwhile, grain and lumber producers have scrambled to find alternative means of transporting their products.

National Observer made several requests to the office of Transportation Minister Marc Garneau to quantify the scale of the economic disturbance, but did not get an answer.

Prime Minister Justin Trudeau has said he believes discussions ⁠— not police intervention, as his Conservative opponents have called for ⁠— are the best way to resolve the looming crisis. Miller has said the same, pointing to the history of prior police raids in Oka, Que., and Ipperwash, Ont,. in the 1990s that resulted in deaths and injuries.

“Everyone wants to take the air out of this balloon in the most controlled way,” Miller said Thursday, adding that he recognizes the urgency of the situation. “The problem is most people are coming up with a pin, and that isn’t the right solution. … We ask for a little more patience because there is a real opportunity here to show the world that we can resolve these issues in a peaceful way.”

Molly Wickham, a spokesperson for the Gidimt’en Clan, one of five Wet’suwet’en clans, said the public needs to know that the RCMP are still very much present in the area. She spoke by phone at a press conference held by the B.C. Civil Liberties Association Thursday.

“RCMP continue to heavily surveil and monitor our people and every single person that comes and goes from our territory,” she said.

Thursday’s press conference was in response to news that the watchdog overseeing the RCMP had declined to open a special investigation into police conduct on Wet’suwet’en territory. In a letter posted publicly, the Civilian Review and Complaints Commission ⁠— an independent arm’s-length agency that investigates complaints against the RCMP ⁠— said issues raised by Wet’suwet’en and supporters were in the public interest, but that it had already produced a report on a similar situation.

Last month, before the RCMP began raiding Wet’suwet’en camps in the pipeline’s path, the BCCLA asked the commission to open a special investigation into the mounties’ conduct on Wet’suwet’en territory, citing eight cases where RCMP officers blocked Wet’suwet’en community members from entering their territory.

Using an RCMP checkpoint, officers reportedly asked for ID, wrote visitors’ names down, searched vehicles and declined to allow crucial supplies through. And as the RCMP expanded that checkpoint into a full-blown “exclusion zone” in which any non-police would be arrested, the BCCLA continued to raise concerns about law enforcement’s expanding power in the region.

On Thursday, the watchdog said its similar report was related to RCMP action during 2013 anti-shale gas protests in New Brunswick. Producing a second investigation could delay the resolution of issues raised in the previous report, which has been in the hands of the RCMP for a year but hasn’t been made public, the complaints commission said.

In the 2013 case, complaints commission investigators found police had exceeded the powers granted to them by law when they searched protestors and their vehicles. The investigators also raised concerns about police checkpoints where anyone entering was asked to give person information.

The RCMP are making this

The RCMP are making this decision???? Whether it is the right decision or not they should not be who decides.

The RCMP need to stand down

The RCMP need to stand down without conditions attached. To agree to leave the road open to CGL to continue building the pipeline across W’en land is to agree to nothing. It is the court, and the judge who imposed the injunction that needs to withdraw now. This is the legal issue.

Can anyone explain Horgan's

Can anyone explain Horgan's statement that removing CGL permits is beyond his control???

I read for the first time

I read for the first time last week that the Hereditary Chiefs had offered the company a different route through their territory, which would have been acceptable to them, but the company pushed through with what they wanted, ignoring the route offered by the Wet'suwet'en. I've seen this mentioned only once. Why does the company get to turn down an acceptable route, and then keep the power plays with the RCMP coming? This needs to be looked at.

This is ridiculous. The RCMP

This is ridiculous. The RCMP has to withdraw COMPLETELY from the Wet'suwet'en territory. It has no business being there. This is a political issue and needs to be decided by the political authorities. But where is the BC gov't? Where is Trudeau? Are they playing games? Horgan and Trudeau should be sitting at the table with the Wet'suwet'en traditional leaders and they should also put all the pressure possible on the pipeline company to take an alternate route. An alternate route is the best solution and I don't believe for a second that it is too costly. Let's have some serious attention to this crisis.

One must consider the

It is frustrating to see the

It is frustrating to see the National Observer buying into the RCMP/government narrative that the RCMP is meeting the Wet'suwet'en demand that they leave the Territory. The RCMP offer was that they would withdraw only if the Wet'suwet'en would guarantee that CGL would have unfettered access to its worksites on Wet'suwet'en Territory. In other words, if the Wet'suwet'en enforces the Injunction on themselves, then the RCMP won't have to. The Wet'suwet'en key demand is that CGL leave. They understand that if CGL leaves that their private police force (the RCMP) will follow.
But further, the RCMP has lied and obfuscated at every stage. They claimed they were not doing aerial surveillance and only admitted they were when video evidence was shown. They claimed they were on the Territory only to keep the peace but then participated in the destruction of Wet'suwet'en property that was in no way impeding access.
There is only one way forward here. The Canadian state in all its forms and the pipeline company have to stop treating Indigenous sovereignty and the climate crisis as hurdles to be overcome. These must become the fundamental bases on which decisions are made.

The CBC reported this morning

The CBC reported this morning that RCMP officers on the Wet'suwet'en territory were referring to their rifles as "reconciliation sticks."

What a horrible thing to say! Where do they get this attitude?

There is an ironic and significant truth behind those horrid comments by the officers. BC and Canada think "reconciliation" comes at the point of a gun. Welcome to 1876.