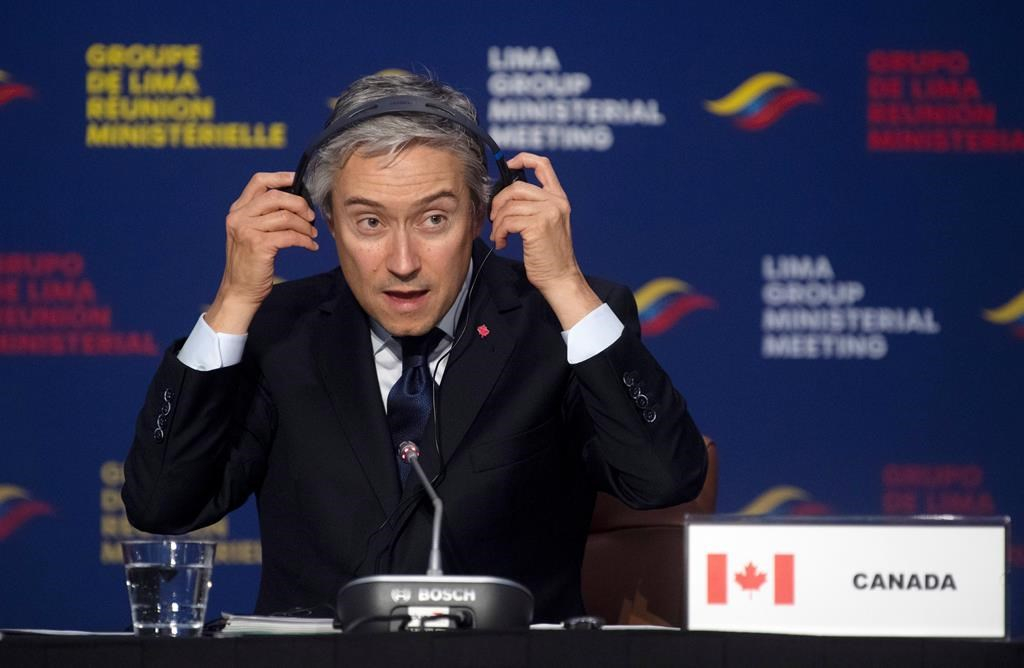 Canadian Foreign Affairs Minister Francois-Philippe Champagne removes a translation headphones as he listens to opening remarks at the start of a meeting of Lima Group ministers in Gatineau, on Feb. 20, 2020. Photo by The Canadian Press/Adrian Wyld
Previous story
Next story

Canada and its Western Hemisphere allies are calling on the rest of the democratic world to help bring stability to Venezuela, hobbled by a refugee crisis and economic collapse under a dictator they deem illegitimate.

"The world is watching each and every one of us to bring this new momentum in the quest for the Venezuelan people to democracy," Foreign Affairs Minister Francois-Philippe Champagne said Thursday as he opened the Lima Group meeting in Gatineau, Que.

"We gather today to discuss the challenges the Venezuelan crisis represents for all of us and how we, the Lima Group, can bring the world community together to re-establish democracy in that country."

Canada is hosting the gathering of foreign ministers from the coalition of about a dozen Western Hemisphere countries, minus the United States, who are trying to solve the Venezuela crisis.

But their efforts have yet to bear fruit. Canada last hosted the Lima Group one year ago, and that meeting resulted in a call to Venezuela's military to peacefully switch sides to the opposition, but that never happened.

"We are looking for a joint vision for the participation of the international community," Peru's Foreign Minister Gustavo Meza-Cuadra said through a Spanish interpreter.

"The only way to return democracy to Venezuela and overcome the crisis is to ensure that there are presidential and parliamentary elections that are free, fair and transparent and inclusive."

The meeting comes amid a renewed push for a new presidential election in Venezuela, one aimed at ousting the country's dictator president, Nicolas Maduro.

Canada and dozens of other countries recognize opposition legislator Juan Guaido as Venezuela's legitimate leader, and view Maduro as an illegitimate president who stole his country's last election in 2018.

Guaido is not at the meeting at the Canadian Museum of History across the Ottawa River from Parliament Hill, but was recently in Ottawa as part of a multi-country tour of Europe and the U.S. to bolster support for this democracy-building efforts.

"His international tour clearly demonstrated how strongly the world supports a return to democracy in Venezuela," said Champagne.

Canada and its Western Hemisphere allies are calling on the rest of the democratic world to help bring stability to Venezuela, hobbled by a refugee crisis and economic collapse under a dictator they deem illegitimate.

"The world needs to come together to stop the human tragedy in Venezuela, and the Lima Group can and must play a leading role in that effort."

The United Nations estimates that six million Venezuelans will have fled their country by the year's end, as its economic, health and education systems collapse.

The exodus has fuelled concern among some UN officials that the migration out of Venezuela and into neighbouring countries might be irreversible as new migrants start new lives and Maduro clings to power in their hollowed-out country. Some fear that Venezuela, once oil-rich and prosperous, might be on a slide toward becoming a failed state.

Colombia's ambassador to Canada, Frederico Hoyos, flatly rejects that assessment and maintains Venezuela's decline can be reversed with a peaceful, democratic transition. He says fleeing Venezuelans — all 1.4 million of them — will always be welcome in his country.

But he says the goal is to bring stability to Venezuela through free and fair elections so refugees can eventually return to their homeland.

US blockades are the

US blockades are the equivalent of medieval siege meant to starve a population into submission. Millions of children died in Iran in '80s without an international outcry due to brutal US sanctions.
Current UN has stated economic blockade is an act of war. In what alternate universe does a senator declaring them self the legitimate government wash and get yup yupped by world press????

Please start calling this a coup d 'etat attempt and stop gaslighting us with your nonsense about Guaido (you know his name means poop.) being the "legitimate leader" if you want your reporting and analysis to be taken seriously. #hands off venezuela

Yes, let's call this a coup d'état just like Haiti, Bolivia and Honduras. Canada continues to be complicit in these US led coups and your reporting needs to reflect the facts as made clear by many sources such as our own Yves Engler.

Canada is upholding the

Canada is upholding the criminal economic sanctions regime imposed against the legitimate Bolivarian gov't of Venezuela in support of the global petroleum gangsters who are determined, just as they were in 1953 in Iran, to overthrow a popularly elected government that had the effrontery to nationalise the country's oil industry. Seventy-five percent of UN member nations oppose this, but since they're all full of brown and black people, I guess they don't count. Please, beloved National Observer, stop subjecting us to this CP junk. Enough, already.

I am surprised and

I am surprised and disappointed that National Observer would give space to this Canadian Press piece that is perpetuating the lies about Venezuela that are being put out by the U.S. government with the full support and collusion of Canada and other nations in its hegemony.

The problems that Venezuela has experienced in recent years have almost entirely been engineered by the USA in its unceasing drive to topple any foreign government that rejects US attempts to move in and exploit its resources, in this case the rich Venezuelan oilfields. They are doubly antagonistic to Venezuela because it has put the lie to claims that a socialist economy does not work and oppresses the people.

The U.S.A. has done everything it could to undermine the economy and government of Venezuela, including pressuring Saudi Arabia to flood the world market to depress the price of oil and undercut Venezuela's main source of revenue (Jason Kenny, please note). It has also imposed economic sanctions and trade restrictions to further depress the Venezuelan economy and create shortages that were intended to foment anger in the people against their government. None of this has had the intended political results. In spite of their hardships, the vast majority of the people still support Maduro.

“Of the 92 elections that we’ve monitored,” said former President Jimmy Carter, whose Carter Centre is a respected monitor of elections around the world, “I would say the election process in Venezuela is the best in the world.” By way of contrast, said Carter, the US election system, with its emphasis on campaign money, “is one of the worst”.

Is this for real? Does

Is this for real? Does National Observer really believe this propaganda. Why doesn't National Observer question where the 54 million of Canadian tax payers dollars went - to support the failed coup in Venezuela. What a disgrace the Canadian government is and they just won't give up . . .

All avenues for peace in Venezuela must be explored: Chrystia Freeland