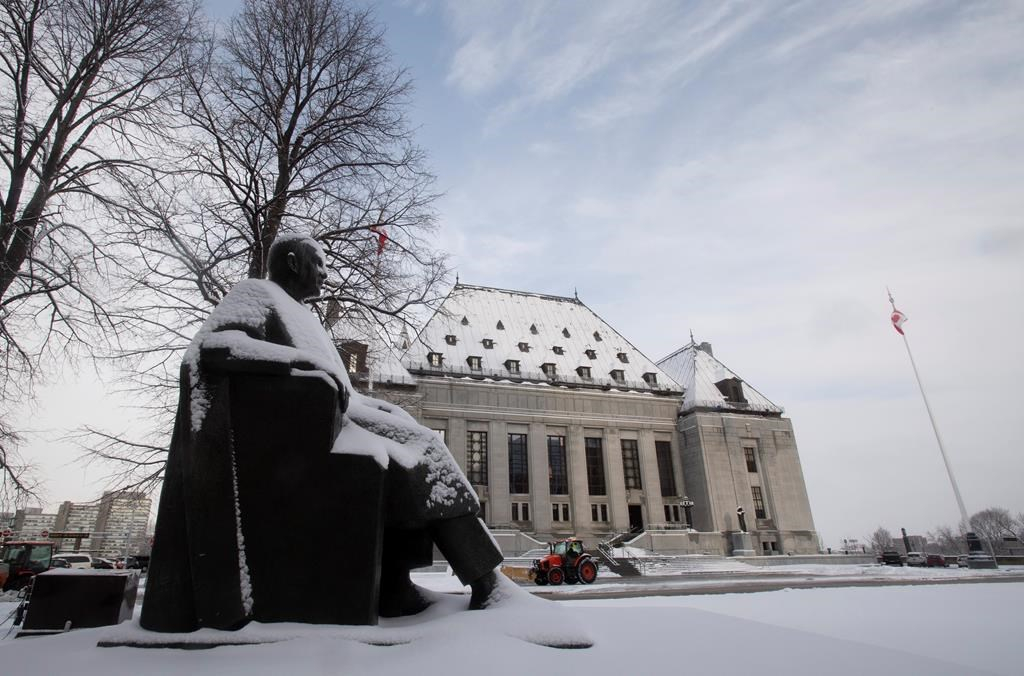 The Supreme Court of Canada is seen, on Thursday, January 16, 2020 in Ottawa. File photo by The Canadian Press/Adrian Wyld
Previous story
Next story

The Supreme Court of Canada has opened the door to a libel lawsuit against Nova Scotia's premier by a former government lawyer who says the premier damaged his reputation by denouncing his courtroom arguments.

The top court today refused to hear an appeal by the Liberal government attempting to keep documents central to the intended lawsuit by Alex Cameron under wraps due to solicitor-client privilege.

As is standard, the court did not provide reasons for its decision.

Cameron has claimed the Premier Stephen McNeil and former justice minister Dianne Whalen libelled him by implying he acted without instruction in 2016 when he argued in court that the province had no legal duty to consult the Sipekne'katik band on a natural gas storage proposal.

The brief was denounced by Indigenous leaders for stating there was historical evidence of the band's "submission" to the British Crown in 1760, in contrast to "unconquered peoples" in other treaties.

After a public outcry, McNeil disavowed the argument, and Cameron has said in court documents that statements by the premier and Whalen implied he was acting without instruction or contrary to instruction from the province.

Cameron successfully fought in Nova Scotia Supreme Court and the Court of Appeal for release of the instructions he received from the province — arguing this was necessary to launch his lawsuit.

He resigned in 2017 from his position at the Justice Department, where he'd been a key lawyer on Indigenous cases.

Andrew Flavelle Martin, an assistant law professor at Dalhousie University, has said the case has implications for lawyers representing government.

"I think for government lawyers generally it's very important ... that politicians have to be very careful about essentially throwing their lawyers under the bus when it's convenient," Martin said.

Cameron's original July 2016 brief was part of the government's defence when the Sipekne'katik band sought to stop a plan by Alton Gas to store natural gas in salt caverns near the Shubenacadie River.

The Supreme Court of Canada has opened the door to a libel lawsuit against Nova Scotia's premier by a former government lawyer who says the premier damaged his reputation by denouncing his courtroom arguments.

Legal experts called Cameron's 2016 argument controversial, as the Supreme Court of Canada has already made clear the Crown generally has a duty to consult Indigenous peoples.

At that point, he says, it became a question of "ministerial responsibility," where cabinet ministers take responsibility for publicly stated and approved government positions.

The judge concluded, "the statements nullified confidentiality and ended the privilege which otherwise applied." His decision was upheld in the Court of Appeal.

Bruce Outhouse, Cameron's lawyer, said in an interview, "Mr. Cameron will file a (libel) action in the usual way, and it will proceed in that fashion in the public domain."

According to court documents submitted by Cameron, McNeil and Whalen suggested to the media on Nov. 17, 2017 that they had no input in Cameron's legal arguments.

The premier told reporters in a media scrum that Cameron's brief was "not what I believe," and "I had no idea it was being put forward," according to the court documents. Whalen added: "I can reiterate what the premier said. (It) went beyond the position of government."

Martin said there are typically approvals required for civil case lawyers like Cameron when they act for government. "From my experience in government, there are a number of layers of approvals that are necessary on a regular basis," he said.