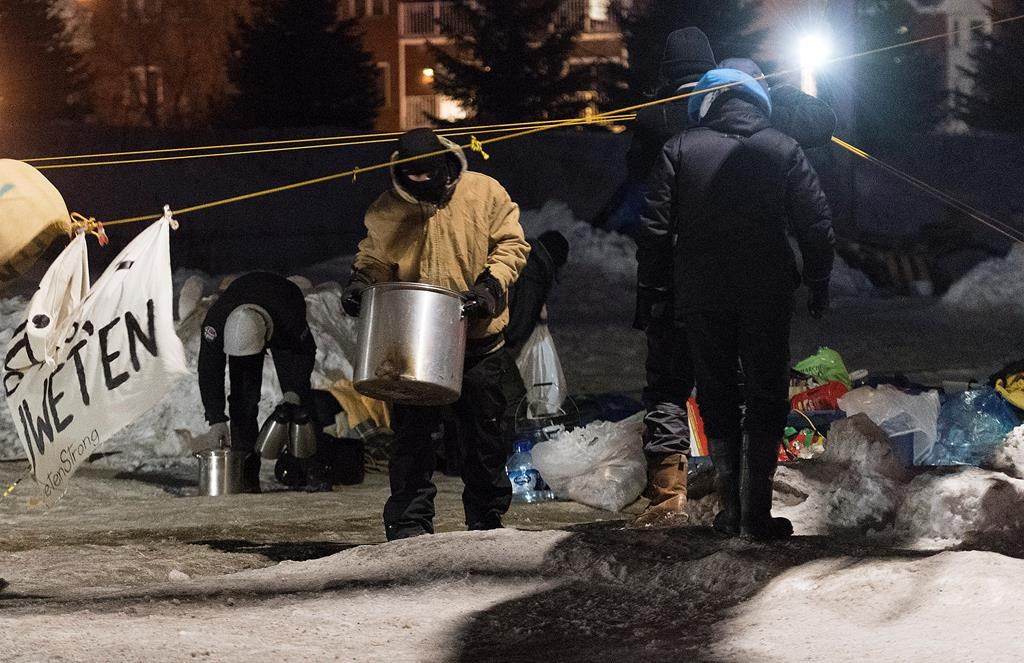 Protesters take belongings from a rail blockade in Saint-Lambert, Que., on Friday, February 21, 2020. Photo by The Canadian Press/Graham Hughes
Previous story
Next story

A blockade south of Montreal that halted rail traffic and frayed nerves since Wednesday was abandoned late Friday after riot police arrived to enforce a court injunction.

They took downs tents and carried items such as sleeping bags, pots, propane tanks and a wood stove to the edge of a security perimeter established earlier in the day by Longueuil municipal police.

Then at around 10 p.m., a spokesman wearing a ski mask and sunglasses announced the rail blockade in St-Lambert, Que., was ending but said the fight was not over.

"Even though the colonial police is removing this barricade with violence and contempt, others will emerge," he said.

He added that until the federal government listens to the hereditary chiefs, the RCMP leaves Wet'suwet'en territory and Coastal GasLink scraps the contentious pipeline, "the colonial Canadian state will be totally paralyzed."

Emotions flared earlier in the day as the protesters dug in next to Canadian National Railway tracks despite being served with an injunction Thursday that ordered that the site be cleared. Quebec Premier Francois Legault called for the injunction to be enforced "rapidly."

Police arrived in large numbers Friday afternoon near the encampment. There were several rounds of talks between police and the masked protesters, and as the impasse continued, some people chose to leave.

The blockade interrupted freight traffic as well as passenger service for suburban commuters and Via Rail travellers.

Wet'suwet'en hereditary chiefs oppose the Coastal GasLink project that would carry natural gas to the B.C. coast, though others in the community support the pipeline.

Countrywide protests and blockades followed a move by RCMP to enforce a court injunction this month against the hereditary chiefs and their supporters, who had been obstructing an access road to a Coastal GasLink work site.

A blockade south of Montreal that halted rail traffic and frayed nerves since Wednesday was abandoned late on Friday, February 21, 2020, after riot police arrived to enforce a court injunction.

Prime Minister Justin Trudeau on Friday called the blockades around the country unacceptable and said they have to come down.

"Let us be clear: all Canadians are paying the price. Some people can't get to work, others have lost their jobs," Trudeau said. "Essential goods ... cannot get where they need to go."

Jean-Yves Lessard, who joined the St-Lambert protesters on Friday morning, said Trudeau's government was to blame.

"If they had done what they needed to at the beginning, people wouldn't be here," he said.

"Sadly, it's bad for the economy and business, but it's not them you should be angry with. Tell Trudeau to go and sit down with the hereditary chiefs."

Legault said he would leave it to police to enforce the injunction.

"We need these tracks for transporting cargo, to avoid job losses, to avoid losses for companies," he said. "The law has to be respected, and obviously I hope it is done in an orderly fashion."

The premier estimated losses to the provincial economy due to the rail blockades at up to $100 million a day.

Denis Bisson, who owns a company north of Montreal that sells slate flooring and countertops, stopped by the blockade Friday. He said he depends on the rail line to supply his business with raw materials from a quarry in Nova Scotia. Switching to flatbed trucks would quadruple the cost per load, he said.

"I'm afraid it's going to last two or three weeks, and I'm beginning to be out of stock in my yard," he said, holding a sign that read in French "hostage for one day or every day?!"

A protester told him they were standing up for Indigenous rights and the environment.

"But they are hitting people that have nothing to do with that," Bisson said. "They're making people pay for something that we're not involved in."

The injunction granted to CN Thursday by Superior Court Justice France Dulude authorized "any police services or peace officers" to assist the company in executing the order in St-Lambert.