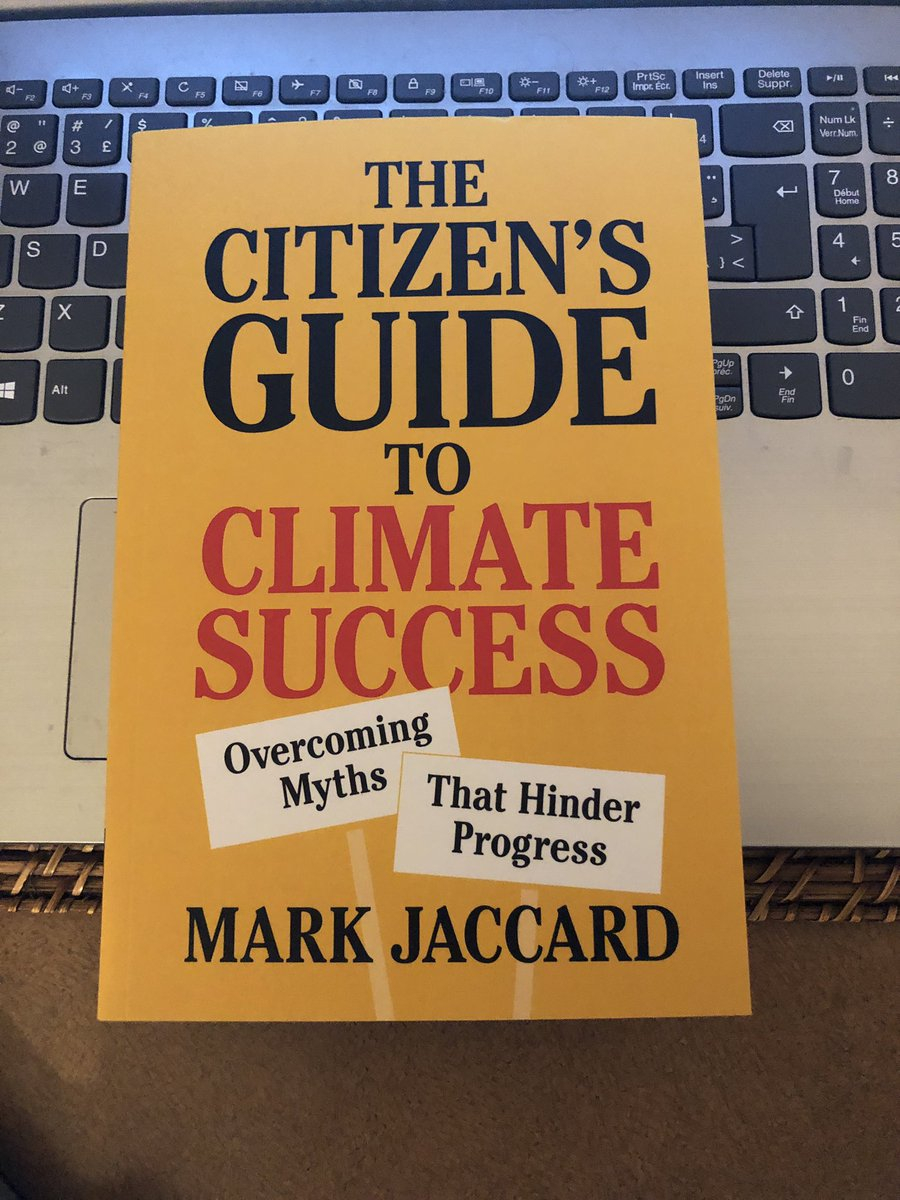 The climate version, relayed by Simon Fraser University professor and IPCC contributor Mark Jaccard, goes: first renewables and efficiency are the climate solution, then they’re not, then they are.

A decade in the making, the book’s distilled wisdom was worth the wait. Given the intensifying climate crisis, it should be read—- and its insights spread — without delay.

The Myths That Guide Us and Blind Us

For readers new to climate science, The Citizen’s Guide offers a quick recap. Given the complexity of modern climate models, Jaccard grounds his discussion by reminding us that a crude but still respectably accurate estimate of the temperature impact of rising CO2 levels was made by the scientist Svante Arrhenius. In 1896. Probably using long division.

The book opens, however, discussing myths and how they blind us. Understanding our tendency to delude ourselves for the sake of self-interest helps us understand conservatives’ climate denial; it does not serve a political group’s interest to admit its opponents are factually correct.

But the SFU professor does not just feed our conceit —he holds an unflattering mirror to progressives’ biases as well. We must overcome them to be the climate stewards our children need.

Jaccard explains that premature declarations of victory rob aggressive climate policies of their raison d’être. We like to show our favoured solutions and projections in the strongest light, but, to cite a close-to-home example, if we proclaim that renewables or electric vehicles have already “won,” why should governments maintain regulations or incentives? Why not direct their limited political and financial capital elsewhere?

The Citizen’s Guide to Climate Success, by Mark Jacard, is now available in stores and available through Cambridge University Press as a free ebook.

On the fossil front, if we argue that global oil consumption will swiftly decline, collapsing prices and rendering new bitumen projects uneconomic, why shouldn’t governments green-light every project, so long as affected communities have given the green light? The lack of demand would prevent most of the hydrocarbons from ever being burnt. Besides, wouldn’t the environmental community prefer fossil fuel companies waste money building doomed projects, so they run out of money faster? Best to just let the market be the villain and improve re-election odds.

Turning to energy efficiency, if all such projects were as easy and profitable as their champions claim — a full chapter is devoted to debunking the wishful thinking to which this reviewer previously subscribed — there would be no need for policy support. Consumers acting in their own self-interest would quickly implement them.

One key takeaway from The Citizen’s Guide is that, however hopeful the trends are that we see, climate action advocates must never preen with victory: this will only relax the resolve of policymakers. It’s not the path we need.

A Copernican Revolution For Climate Advocacy

Given the absolute importance of climate action and the relative impotence of scientists to prompt it, Jaccard calls for a holistic approach to our advocacy. He argues that political science, behavioural economics, sociology, psychology and other fields are integral to catalyzing climate action. It is a Copernican revolution from the popular approach of championing specific technologies and/or taxes.

Jaccard asks readers to keep these in mind when considering the trade-offs climate-sincere governments might have to make to secure re-election, to prevent anti-climate parties from seizing power and blowing up prior progress.

He underscores these risks by describing how British Columbia’s pioneering carbon tax — for which he consulted — risked erasing the governing Liberal Party’s one-time 20-point polling lead. Following Hurricane Katrina (2005) and Al Gore’s An Inconvenient Truth movie (2006) polling showed the environment was voters’ top priority. The B.C. Liberal Party announced the tax in early 2008, in retrospect a savvy move to seize the climate high ground from the New Democratic Party opposition.

Once the carbon tax was announced the Liberals’ lead immediately shrank, then continued to erode in the subsequent months. A spike in global oil prices from USD $100/barrel to USD $140/barrel by summer 2008 could not have helped. To hear Jaccard tell it, the meteor of electoral defeat was only knocked away by the asteroid of the 2008 global financial crisis, which turned management of the economy into a bigger issue than the then-contentious tax.

The Citizen’s Guide closes with a warning not to dilute climate advocacy by attaching other agendas. The movement willing to fight climate change will always be larger than the movement wanting to fight climate change as well as capitalism. Unless pro-climate capitalists repeat the sleaziest abuses of industrial elites — running discriminatory workplaces, intimidating unionization efforts, persecuting whistleblowers, harassing journalist women — why hold them back?

Jaccard’s rebuttal of the Naomi Klein-popularized argument that capitalism must die for the climate to survive will be challenging reading for some but necessary reading for all. To sum it up in one sentence, he notes that Klein’s ideal resembles modern Scandinavia, capitalist Scandinavia. As the ravaged landscapes of Communist countries historically attest, the concentration of political power is probably a greater threat to the environment than the choice of economic paradigm.

A democratic socialist at heart, my ideal aligns with Klein’s. I have a predisposed skepticism about transnational organizations like the World Trade Organization; all organizations with power eventually get abused by the powerful. That said, I can foresee the day when the climate movement is influential enough that the WTO drafts model regulations for member states to impose carbon tariffs on climate laggard countries.

This would close an important loophole for “carbon leakage,” whereby production moves to regions of least carbon regulation. Doing so would make it easier for countries to advance aggressive climate policy. So for all my wariness, I can coexist with the WTO a bit longer.

Jaccard opens and closes The Citizen’s Guide with his prescription for climate success, which could be paraphrased as “remove fossils from electricity and transport; tax imports from climate laggards; and assist the Majority World in the energy transition.”

Succinct but comprehensive, the three rules would work as smartphone wallpaper. They’d easily fit on a business card as well. As for exactly how to achieve them, that is his wisdom; and like a National Observer subscription, that wisdom is worth its price.

Canadians put environment first. What about their leaders?

The mountain that then "is"

The mountain that then "is" again hints at the underlying bottom line, which is that we're taking too much, trashing too much, and wasting too much. Nature can't keep up. Climate change is an element of this -- a mountain -- but only part of the problem.

The question is: Is it smarter to dig deep into every natural resource with clean, green energy, or to continue with dirty fuels? Ultimately, fooling ourselves with clear skies and de-acidiftying oceans, while still outstripping Earth's bioproductivity and ability to recover, is the greater folly.

Dirty fuels give the planet a fever. They aren't the cause of the problem', rather a key symptom. They grease the wheels of greed, glut, and garbage. Just as treating symptoms doesn't cure a disease, so too will addressing just global warming -- the fever -- not cure the fix we're in.

Which may be what Professor Jaccard is saying, although this piece about the book doesn't make that clear.

Also, please note that, while living in Norway for a year, I understood the difference between socialism and communism, which this piece -- and possibly Jaccard's book -- doesn't seem to know. Communism is when everyone works for the government. Socialism is when the government works for everyone. They are diametrically opposite. Thus, capitalist Sweden that works for all citizens is a legitimate form of socialism.

I think this comment may be on the right track. Modernity's reliance upon artificial (i.e. non-current-accounts chlorophyll photosynthetic [plant] and Krebbs cycle [animal] energy sources, whether "green" or "greenhouse" may be the true root of much evil. There must surely be a place for more quasi-neo-Luddite, more labour intensive, less "efficient", less "productive" activity in any truly sustainable economies of the future. The two-centuries old drive to demonize manual labour and handiwork fueled by healthily fed people in the church of mechanization and capital intensive "economies of scale" seems perhaps to involve a certain amount of blasphemy, if the ire of goddess Gaia is to be taken at all seriously.

On the second topic; not to suggest that Wikipedia is any kind of ultimate authority but it's often not a bad jumping off point...from the first paragraph of the Wikipedia entries for "Communism" and "Socialism", respectively...

"Communism (from Latin communis, "common, universal") is a philosophical, social, political, economic ideology and movement whose ultimate goal is the establishment of a communist society, namely a socioeconomic order structured upon the ideas of common ownership of the means of production and the absence of social classes, money, and the state."

"Socialism is a political, social and economic philosophy encompassing a range of economic and social systems characterised by social ownership of the means of production, and workers' self-management of enterprises. This includes the political theories and movements associated with such systems. Social ownership can be public, collective, cooperative or of equity. While no single definition encapsulates many types of socialism, social ownership is the one common element."

It's tempting to try to boil long contested ideological terms down into pithy one-line concentrates but not always helpful, IMHO. A quick web search suggests that both terms were in common usage from around the 1820's in France (not sure about Norway) and began to appear in the literature of political discourse in the 1840's. There was from the beginning lots of debate about governance and government, however I can't find any tradition associated with either that advocated that everyone work "for the government". Rather the dominant strands looked (and still look) toward a day when the notion of "government" itself, in the sense of a group of people unto whom decision-making power accrues in any sort of institutionalized way, is permanently left behind. This was, as far as I know, even the official Party Line of Bolshevism, though application of it was debatable, to say the least. (Don't have any info on where the CPC and current leader Xi Jinping come down on this stuff. Seems confused, but probably that's just me.)