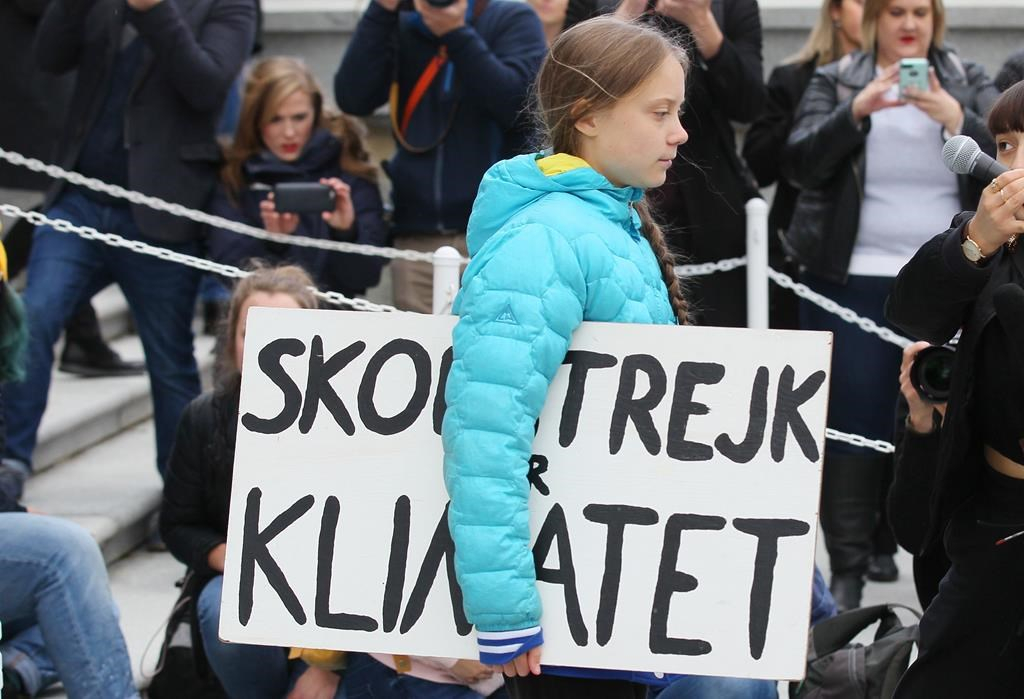 An Alberta woman says she has complained to the RCMP about a decal bearing an energy services company's logo below a cartoon depicting what appears to be the sexual assault of 17-year-old Swedish climate activist Greta Thunberg.

The sticker has a black-and-white drawing of a female figure's bare back with hands pulling on her braided pigtails. The name "Greta" is written below. Under the drawing is the logo of X-Site Energy Services.

The company's general manager, Doug Sparrow, did not return messages seeking comment from The Canadian Press, but has denied having anything to do with the stickers to other media outlets.

Michelle Narang of Rocky Mountain House, Alta., said a friend who works in the oil and gas industry texted her a photo of the decal and told her an X-Site employee was handing them out.

Narang, who has two teenage daughters, said as soon as she saw the image, she sat down in a chair and cried.

"The visual is jarring," Narang said Thursday. "It hurt. It hurt on so many levels."

Narang said she called the RCMP to report the decal as child pornography.

RCMP Cpl. Ron Bumbry said officers are aware of the image and "will be following up."

A torrent of online outrage was sparked when Narang posted the image on social media Wednesday night.

Sparrow told Calgary radio station CFFR that he has since received hundreds of complaints, but his company wasn't involved.

"It's not from X-Site or any employee. Someone has done this. That's all I know," he told the radio station.

Sparrow's voicemail at X-Site was full on Thursday and an email to him bounced back as undeliverable. Messages left with other employees and an email sent through X-Site's website were not immediately returned. Calls to 24-hour dispatch numbers went to voicemail.

A sales contact listed on X-Site's website said he no longer works with the company, but that Sparrow had told him earlier Thursday that the stickers did not come from Sparrow.

"This is not what our province stands for. Whoever is responsible should be ashamed and apologize immediately. I stand with Albertans against this horrendous image," she wrote on Twitter.

Premier Jason Kenney tweeted in response: "Thank-you for denouncing this odious image and the message it sends."

Thunberg has made headlines for her passionate pleas to world leaders to take tougher action on cutting greenhouse gas emissions and for inspiring large climate marches around the world.

She joined thousands in a march through downtown Edmonton in October. Oil-and-gas industry supporters showed up, but they were vastly outnumbered by the climate marchers.

Narang said she was reluctant to share the Greta image because she didn't want to give the energy sector another black eye as environmental opposition stalls development in an economically vital industry.

"In Alberta, especially, we are fighting so hard for an industry that means so much to us and to have that sort of sabotage from within — you can't do that."

Narang said she has been heartened by industry workers speaking out against the Greta image.

This report by The Canadian Press was first published Feb. 27, 2020

There may be a way to weasel