Hereditary chiefs and ministers in second day of pipeline talks 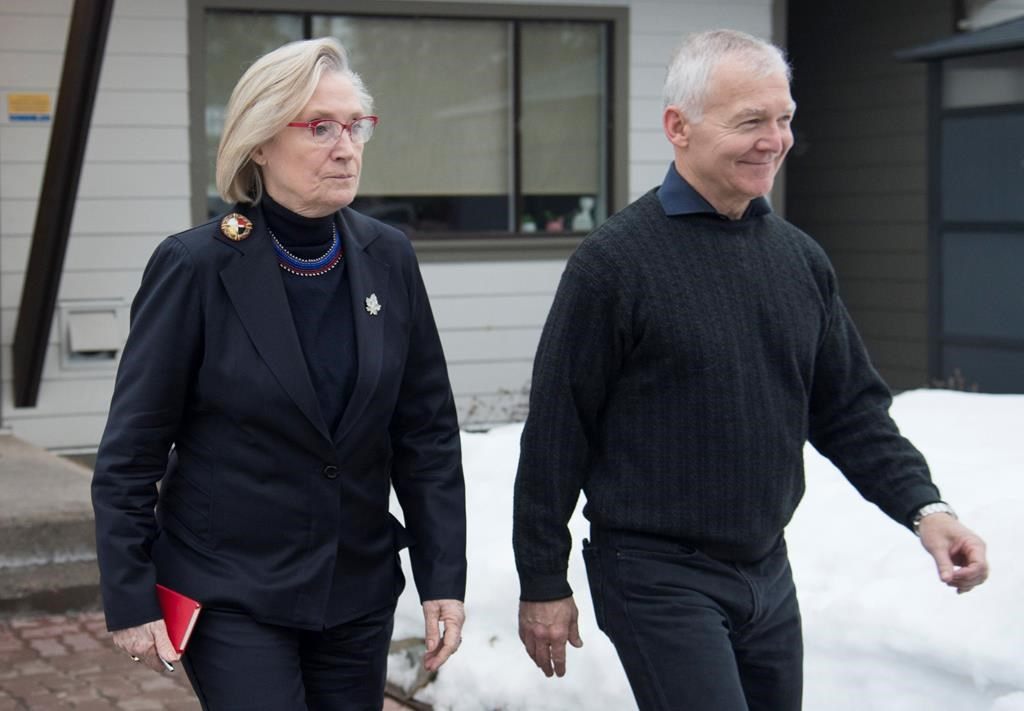 The hereditary chiefs of the Wet'suwet'en are meeting for a second day with senior federal and provincial ministers as they try to break an impasse in a pipeline dispute that's sparked national protests and led to disruptions in the economy.

The hereditary chiefs have described the meeting as a first step, noting that Prime Minister Justin Trudeau and B.C. Premier John Horgan declined invitations to discuss the Coastal GasLink project.

Bennett appeared to leave the door open Friday to a meeting involving the prime minister and premier in the future.

"I think we need to do some hard work. We would want any meeting with the prime minister and the premier to be a good meeting, and therefore we have to do the work," she said before entering the Wet'suwet'en office for the talks.

"It's really important that minister Fraser and I have been delegated by the premier and the prime minister to do this work and that's what we're going to do."

Horgan said Thursday that he has met with the hereditary chiefs in the past and is prepared to meet with them again, but there need to be conditions for constructive dialogue and the best way forward is for the Indigenous relations ministers to be at the table.

Fraser noted that he had 25 hours of initial conversations with the chiefs several weeks ago and the province has been working closely with them so they have a relationship already.

"The important thing is we are willing to roll up our sleeves and get to the complex and difficult issues and we began that yesterday and we're going to continue that today," he said.

The talks were expected to wrap up Friday but the ministers said they are open to all options and might remain in Smithers over the weekend.

Nathan Cullen, a former NDP MP who is acting as a liaison between the governments and the chiefs, said outside the meeting that the amount of work being done is substantial but the parties are unlikely to reach a broad resolution on Friday.

"It is important, it seems to me, to the chiefs and to Canada and B.C., that even if we only can arrive at interim steps here, they're durable. There's no such thing as a quick fix in this. This is something that needs to be taken seriously and from my observations, all the parties are taking it incredibly seriously," he said.

Establishing trust is important to arrive at solutions, which have to be found at a negotiating table, Cullen said.

"For those folks that are expecting a full and final resolution of this matter after a day and a half of talks, I think that is a very, very high expectation to have."

He also said in a phone interview that Trudeau and Horgan have "explicitly not" ruled out a meeting with the chiefs.

The hereditary chiefs' opposition to a natural gas pipeline cutting across their traditional territory, coupled with their efforts to limit police presence on their lands, have sparked shows of support across the country that have halted rail service for the past three weeks.

The Mohawk Council of Kahnawake in Quebec proposed Friday that its Peacekeepers head up a temporary Indigenous police force to patrol the Wet'suwet'en territory and allow the RCMP to withdraw entirely from the area.

Grand Chief Joseph Norton said his community's chief Peacekeeper has offered to work with other Indigenous police chiefs to gather the officers required.

Cullen said he wasn't aware of the offer from the Mohawk council and it isn't a part of the discussions at the meeting between the hereditary chiefs and ministers.

"New ideas or new offers, they're coming in from everywhere," he said. "That's helpful to an extent but it's going to be the people around that table who are going to make the solutions happen."

The RCMP has already committed to ending patrols along a critical roadway in Wet'suwet'en territory while the negotiations unfold, while Coastal GasLink has consented to a two-day pause in its activities in northwestern B.C.

The dispute over the Coastal GasLink pipeline project began months ago, but tensions began to rise on Dec. 31 when the B.C. Supreme Court granted the company an injunction calling for the removal of any obstructions from roads, bridges or work sites it has been authorized to use in Wet'suwet'en territory.

The RCMP moved in to enforce that injunction on Feb. 6. Hours later, protesters started holding up railway traffic outside of Belleville, Ont., in solidarity with the Wet'suwet'en hereditary chiefs, thwarting freight and passenger rail travel.

During question period Friday, Conservative finance critic Pierre Poilievre said the economic repercussions of the suspended rail service and shipments have amounted to a "war on working people" and demanded to know how government would fight back.

Transport Minister Marc Garneau told a Commons committee on Thursday that Ottawa is trying to analyze the economic impacts to the economy of the disruptions, but said it is a complex calculation that could take up to six months to fully determine.

Garneau said the financial implications will likely be higher than most Canadians might think, as a total of $300 billion worth of goods moves by train every year in the country.

"What's important here to realize is, even if we start tomorrow and we had all the barricades down, it takes weeks, perhaps months to get back up to speed."

— With files from Graeme Hamilton in Montreal and Teresa Wright and Joan Bryden in Ottawa.