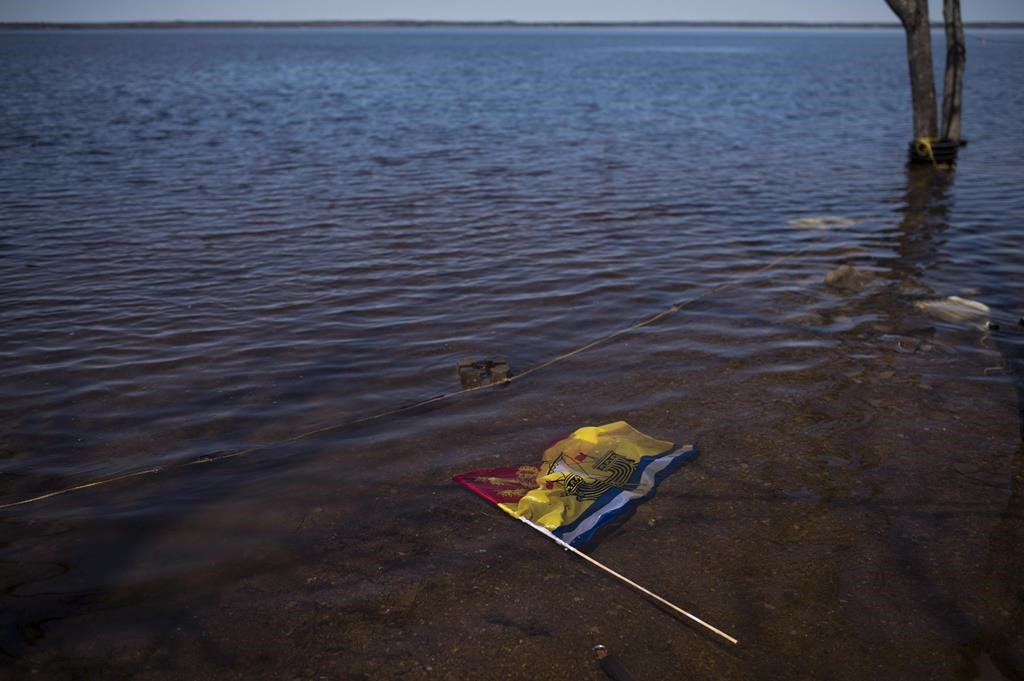 A New Brunswick flag floats in floodwater from the Saint John River in Waterborough, N.B., on May 13, 2018. File photo by The Canadian Press/Darren Calabrese
Previous story

As Canadian communities brace for rising risks of spring flooding related to climate change, a non-profit group has published findings suggesting preserving wetlands and forests can be key to reducing adaptation costs.

The approach has been applied to the New Brunswick communities of Florenceville-Bristol, Riverside-Albert, and Riverview; Oshawa, Ont. and the district of Sparwood and City of Courtenay in British Columbia.

The report dated Feb. 21 estimates savings ranging from $200,000 to $414 million for preserving or improving so-called "natural assets," with results including improved drainage of stormwater and purification of drinking water.

The initiative was originally pioneered by the Town of Gibsons, B.C. — which conducted the first similar studies — and is funded by the Suzuki Foundation.

One of the areas considered was how conservation helps adapt to flooding.

Last year's Canada's Changing Climate Report, a summary of climate science by federal researchers, concluded the effects of widespread warming are becoming evident in many parts of Canada and "are projected to intensify in the future," including earlier spring peak streamflow and rising sea levels.

The natural assets report says in Florenceville-Bristol, N.B., protecting 182 hectares of forested area along the St. John River helps avoid costly human-engineered systems that would be required for a one-in-100 year rain storm.

It estimates forest conservation would save the creation of a $3.5 million stormwater management pond system.

In Riverview, N.B., adjacent to Moncton, protecting four wetlands that cover 14,000 square metres in the Mill Creek Watershed would avoid the $2.3 million needed to create stormwater management ponds to handle a 1-in-100 year flood, as predicted under a climate change scenario.

In Oshawa, Oshawa Creek — which drains an area of about 119 square kilometres — and surrounding lands were studied as the key natural system for handling more frequent rain storms.

According to the group protecting seven kilometres of natural area in the watershed, including steps to guard against erosion of lands around the creek system, would save about $18.9 million that it would cost to build a concrete channel with similar flow rates to handle runoff.

If full protection measures are taken for the entire length of the creek and its surrounding floodplain, the financial benefits increase to $414 million by avoiding construction of alternative, human-made water channels.

The consultant calls for additional study of the water system to fully define ways to help it absorb precipitation.

In Courtney, B.C., the study looked at several potential flooding scenarios from the Courtney River, one based on the 2009 flood conditions and another on a 1-in-200 year storm.

The project identified four options including widening the Courtenay River banks, converting a sawmill site to a natural foreshore, bringing back the river's natural path and "gradually removing properties from the flood plain and allowing only land uses that are compatible with flooding in the flood plain."

The study found these measures would not solve the flooding problems, but they would reduce flood damage by between $723,000 and $2.4 million, depending on the extent of the flooding.

Roy Brooke, director of the Municipal Natural Assets Initiative, said in an interview the information being gathered for municipalities can be used for their planning.

"Natural assets are providing vital infrastructure to communities, and the services have a value and often increase over time because they are adaptable in the face of climate change," he said.

"This becomes information the communities can leverage ... to start treating nature for what it is: a vital asset and a core part of any resilient system."

This report by The Canadian Press was first published on March 1, 2020.