Canada's tourism industry could be hit hard by coronavirus 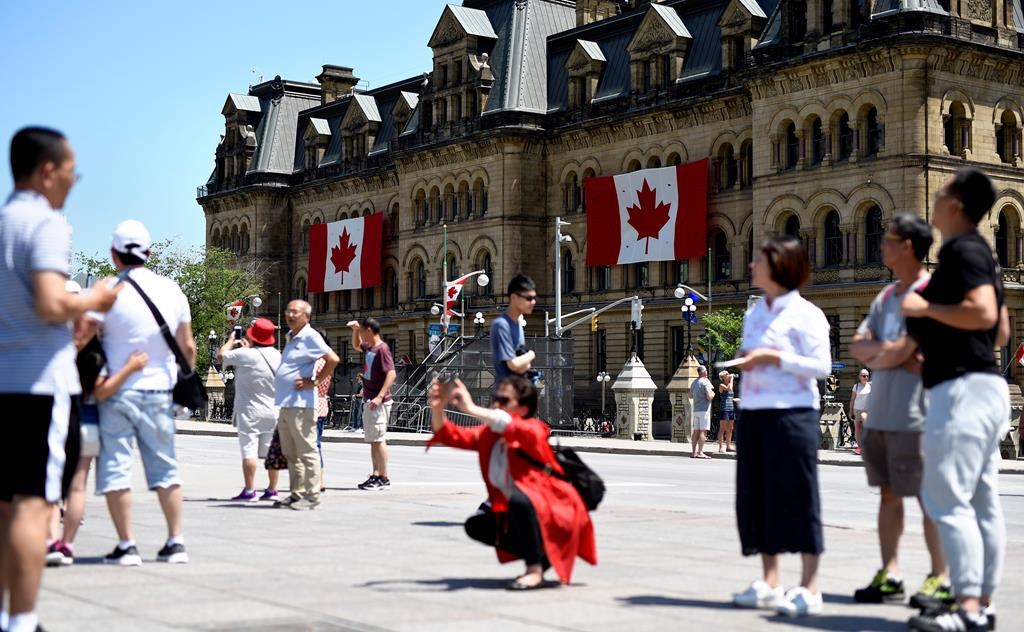 Canadian flags are seen on the Office of the Prime Minister and Privy Council as tourists take photos on Parliament Hill before Canada Day, in Ottawa on Thursday, June 27, 2019. File photo by The Canadian Press/Justin Tang
Previous story
Next story

Canada's tourism industry is bracing for the impact of the novel coronavirus on the number of foreign visitors this summer travel season.

Some people in the industry are already seeing a change in the number of people coming from overseas, particularly from China — the second-largest long-haul market for Canada-bound tourists and where the outbreak began.

"Bookings are down from China by about 70 per cent between March and October, so that's obviously quite considerable," said Maya Lange, the vice-president of global marketing with Destination BC, a Crown corporation focused on attracting visitors to the province.

Several airlines have restricted the number of flights to the country, and some people have had difficulties getting visas due to temporary closures at some application centres.

Several Canadian tourism marketing agencies have pulled all their ad money from China and are using it to double down on efforts to attract people from other markets like the United States and United Kingdom.

According to Statistics Canada, there were 571,000 tourist arrivals from China in 2019.

"In the past, in any one of our markets, when exceptional circumstances have occurred, we have taken similar actions to ensure our tourism marketing efforts are impactful," said Tess Messmer, a spokeswoman for Destination Canada, a Crown corporation focused on marketing Canada abroad.

The corporation said China remains an important market and it will still work with online travel agencies and travel media there.

Tourism Ottawa has also pulled its ad dollars out of China, but said it hopes to maintain a relationship with Chinese tour providers and other contacts.

"We know that this will end at some point and we want to continue the relationship, we don't want to abandon the gains that we've made in any markets," said spokeswoman Jantine Van Kregten.

Canada's tourism industry is bracing for the impact of the novel coronavirus on the number of foreign visitors this summer travel season.

Meanwhile the virus has spread from China to more than 70 countries, and the situation continues to change by the day.

She is expected to give a presentation to members of British Columbia's tourism industry Wednesday, with a focus on what to expect if the coronavirus continues to spread globally.

She said during the SARS outbreak in 2003, tourists from within Canada and the U.S. still vacationed.

"So we do think those markets will continue to travel, obviously if Canada continues as a safe destination," she said.

Canada is still considered a safe place to visit, with a low risk of transmission of the virus.

So far, 33 cases of the virus have been confirmed domestically, with 20 in Ontario, 12 in B.C. and one case in Quebec. All of them have been linked to people who have recently returned from abroad and their close contacts.

Health Minister Patty Hajdu said the federal government is preparing for a large influx of international travellers during the upcoming tourist season, but was not specific about those plans.

As for festivals and other large events, federal and provincial health authorities in Ontario and British Columbia have so far not issued special instructions about large gatherings like events and festivals, calling it "business as usual."

"If there's a need to change that, it will be a conversation with the federal government, provincial government, and something we'll look at locally based on the risk of the infection and the benefits of maintaining societal functioning," said Dr. Vera Etches, Ottawa's top local public health official.

Still, health authorities warn the situation in Canada and abroad has been changing rapidly and everyone needs to be ready to adjust.

"For event planners, I would say you need to do a risk assessment on an ongoing basis," Bonnie Henry, the B.C. health officer.

This report by The Canadian Press was first published March 3, 2020.

'But what about China and India?'