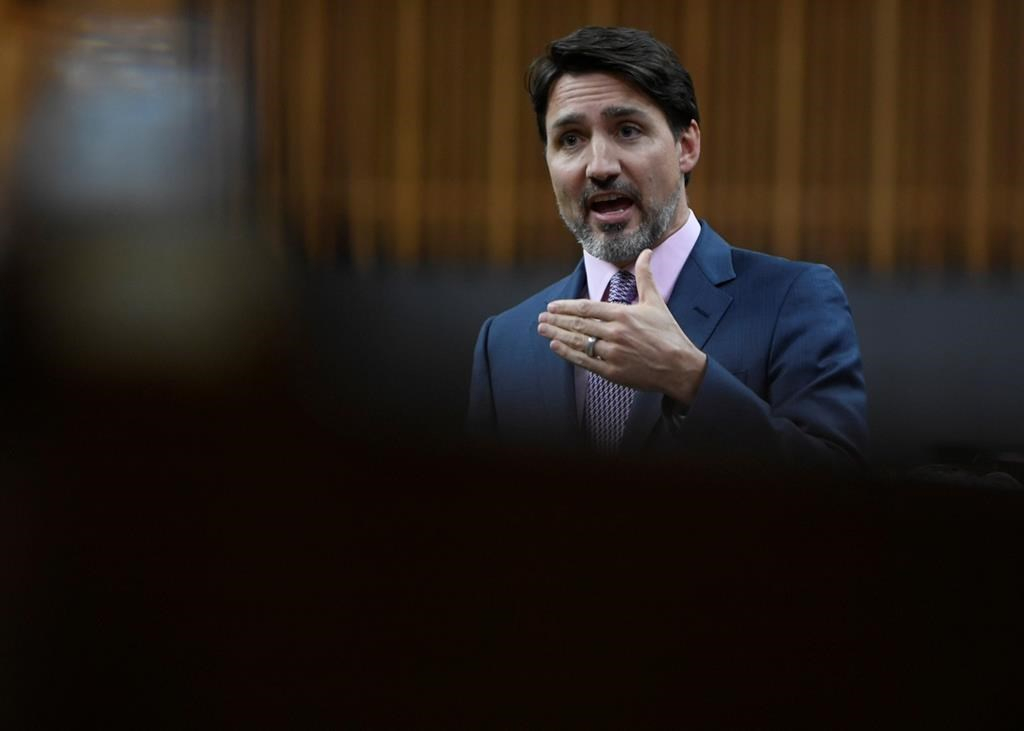 Prime Minister Justin Trudeau responds to a question during Question Period in the House of Commons on Wednesday, February 26, 2020 in Ottawa. File photo by The Canadian Press/Adrian Wyld
Previous story
Next story

Prime Minister Justin Trudeau says he knows people are impatient for a resolution to tensions involving a disputed natural gas pipeline in northern British Columbia, but time is needed to respect the traditions of the Wet'suwet'en people.

Speaking to reporters in Halifax Tuesday, Trudeau acknowledged the opposition of some Wet'suwet'en leaders to the Coastal GasLink pipeline has led to difficult times for many Canadians over the past few weeks.

He said his government has been focused on trying to find a solution, but added that current tensions stem from Canada's dark history of mistreatment of Indigenous Peoples in Canada.

"We know that centuries of marginalization, of oppressive, broken government policies have created a situation that is untenable," Trudeau said.

"It is not an easy process. It is a process we are all impatient with that needs to move forward, but we need to remain positive because the only path forward for our country is for all of us to work together and that is what we're going to stay focused on doing."

Wet'suwet'en hereditary chiefs and senior federal and B.C. cabinet ministers reached a proposed agreement over the weekend, but details are not being released until the Wet'suwet'en people are consulted through their traditional feast protocol, which could take up to two weeks.

Trudeau says his government is respecting this process, and will not discuss details of the agreement until the Wet'suwet'en "have an opportunity to share it and discuss it internally," he said.

But the prime minister also sidestepped a question about how the deal will affect the pipeline project.

All parties have made it clear the agreement touches only land and title rights generally. The natural gas pipeline itself remains in dispute.

Five Wet'suwet'en elected chiefs from councils that support the pipeline released a statement saying they are pleased that progress was made in the talks with the provincial and federal governments but they said the agreement was reached without input from all the Wet'suwet'en communities.

The statement said they "envision" the elected chiefs and council of the various Wet'suwet'en communities will be included in a review of the deal.

"We need to be engaged in our feast hall, in our respective communities to ensure all of our clan members are heard and acknowledged," it said.

The hereditary chiefs could not be reached for comment on Tuesday.

"This project is underway. It has been approved and ratified. It's going to be completed," Horgan told the B.C. legislature Monday.

He noted the tentative agreement with the Wet'suwet'en chiefs is "forward looking," dealing with their role in future discussions of land rights.

"There was not, at any time, any objective to go in and convince people to have a different point of view. We had a frank discussion. There was disagreement. The project will proceed. Dissent is appropriate. Unlawful dissent is not," Horgan said.

Trudeau noted the federal and provincial governments had been working previously with the Wet'suwet'en Nation on rights issues, including a deal signed with Ottawa in 2018 giving the Wet'suwet'en full jurisdiction over their own child and family services.

The new deal, if agreed to by the community, will build on this work, Trudeau said.

While not saying so overtly, Trudeau's remarks intimated that Ottawa hopes the deal can help lower the opposition to the pipeline project.

"Obviously we have come to what is hopefully a new level of solutions and collaboration with this most recent agreement," Trudeau said.

"We understand that this is a challenging situation for everyone, but we must remain committed to reconciliation and to the respect and partnership that must underly the path forward we take."

Meanwhile, Canadian National Railway Co. has started to recall most of the 450 workers temporarily laid off last month during the height of rail blockades that brought the company's eastern network to a near standstill.

The blockades sidelined more than 1,400 freight and passenger trains and, according to analyst estimates, cost the company scores of millions of dollars.

At the ongoing rail blockade south of Montreal on the territory of the Mohawks of Kahnawake, discussion is ongoing about whether the barricades should remain, a spokesman said Tuesday afternoon.

Kanentokon Hemlock, a traditional chief of the Bear Clan, said the tracks will stay blocked as the community builds a consensus on its next steps.

The Mohawks have been in contact with the hereditary chiefs in B.C., who had expressed their gratitude for the support they've received, Hemlock said. However, he says it's up to the Kahnawake Mohawks to decide if and when the blockade comes down.

"They were just really thankful for the support and everything from this way, but it's on our end now too, as well, (to decide) on how we're going to continue to support them moving forward," Hemlock said in a phone interview.

This report by The Canadian Press was first published March 3, 2020.

— With files from Morgan Lowrie in Montreal.

Frankly, the shutdown of

Frankly, the shutdown of railways across the country was not necessary. Many routes could have been kept open. It seems to have been more of an intended opinion-shifting measure.
Trudeau employed an interesting choice of words: nowhere does he acknowledge that governments' actions have over the past significant part of the "150 years" been a matter of policy geared at subverting the Supreme Court of Canada decision (Delgamuk'uuw), i.e., *illegal* activity.
Nowhere has mainstream media acknowledged that the federal and provincial "go-aheads" were without an environmental certificate. Nowhere does mainstream radio/TV media mention that all this "forward thinking" Horgan mentions, arises as an end-run around Delgamuk'uuw and the lack of a sufficient environmental certificate from his government.
Nowhere does any media I've found, set out the basis upon which the pipeline company got its injunction against the Wet'suwet'en, since apparently the First Nations being tarred by the likes of Kenney & Petro Cos. brought that to the attention of the judge presiding at the hearing of the application for injunction.
I hope that if the government's proposal includes territory reduction, or "regular" title leaving territory subject to expropriation, (as opposed to aboriginal title requiring nation-to-nation negotiations), the First Nations reject it out of hand.
This settlement, after all, cannot be seen to be happening before enactment of legislation enabling UNDRIP.
Shame on both levels of government, and the industry. Not that they have any.