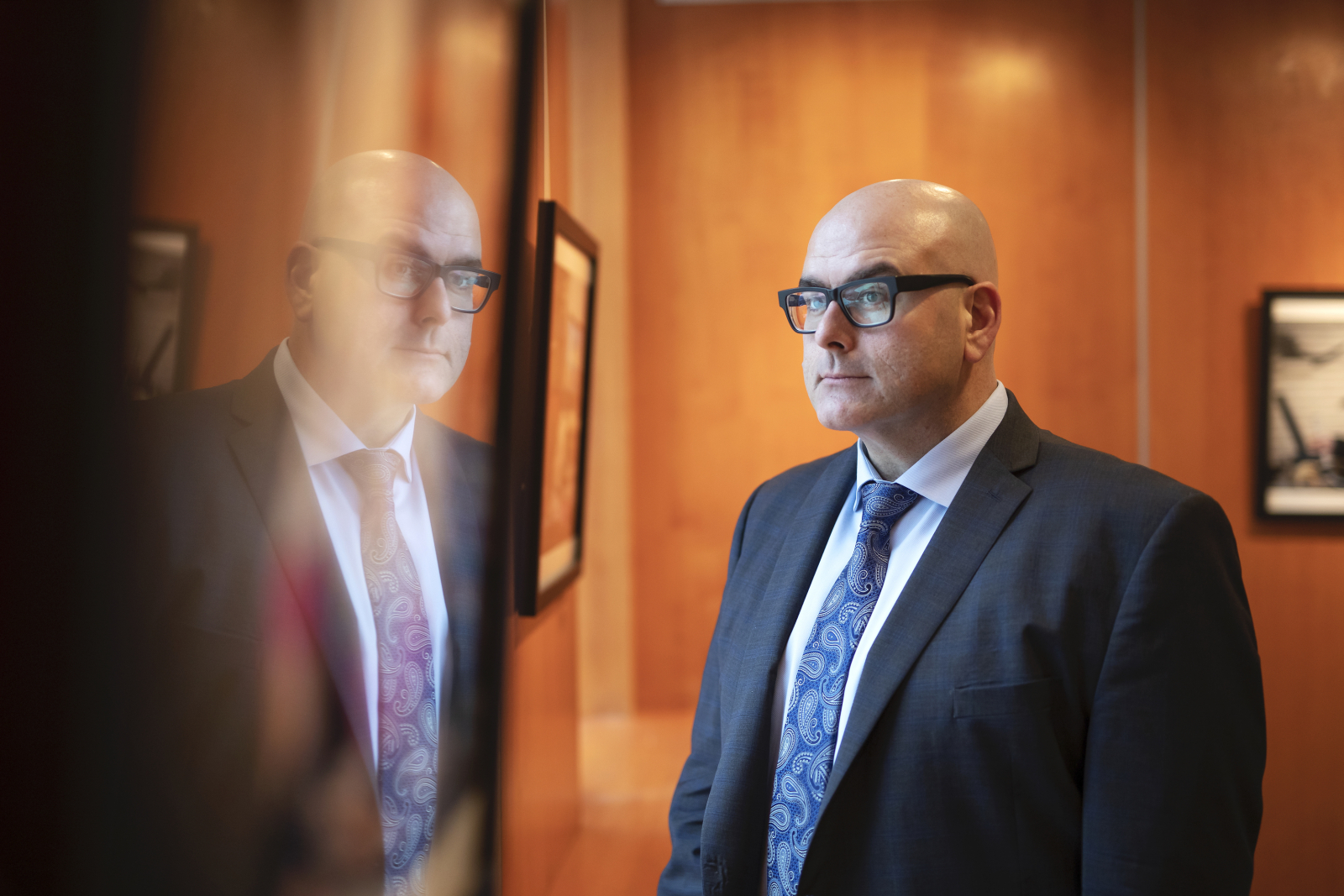 The new leader of the Ontario Liberal Party, Steven Del Duca, pictured after an interview with National Observer on Feb. 18, 2020. Photo by Cole Burston
Previous story

For a party that most pundits agree is in sore need of renewal, Steven Del Duca may come across as an unlikely next leader of the Ontario Liberal Party.

As a former transport minister, he was a key lieutenant in the government of Kathleen Wynne before being unceremoniously dumped by the voters of Vaughan-Woodbridge in the 2018 election that catapulted Doug Ford and the Progressive Conservatives to power and stripped the Liberals of official party status.

And a significant chunk of the party’s supporters seem to want a more drastic break from the past, as evidenced by the surprisingly strong showing of Kate Graham, a young outsider candidate who secured the third most delegates heading into this weekend’s leadership convention.

But on Saturday, Del Duca’s deep political connections — the 46-year old father of two daughters first volunteered for the party when he was 15 — helped him move from clear front-runner to newly crowned leader in the first round of voting.

Recent polls have suggested momentum was already turning back to the provincial Liberals while they trudged through a leadership vacuum. The party may have a long road ahead in its rebuild, but pundits say Del Duca has time on his side and the competence and organisational clout to get the Liberals back in the game.

“I suspect Steven Del Duca is a good enough retail politician that he won’t fall on his face,” said Nelson Wiseman, a professor of political science at the University of Toronto.

Yet he's already facing controversy, with CBC News reporting last month that he had built a swimming pool at his home on a cul-de-sac abutting conservation land without the correct permit. He is proposing a land swap with the conservation authority in order to keep the pool.

Ford's government have jumped on that story, announcing they'll host a "pool party" outside the Liberal convention immediately after the result.

Wiseman said the well-organised and ambitious Del Duca should be able to harness the strong brand the Liberals retain in Ontario despite the 2018 drubbing, which would put him in a good position as voters consider Ford’s record when they cast ballots in 2022.

Del Duca will now need to turn his attention to uniting the party behind his leadership, rebuild grassroots enthusiasm, recruit candidates for well over 100 ridings, and boost the party’s recent dismal fundraising efforts.

Del Duca was the most successful of the six Liberal candidates when it came to collecting donations to his leadership campaign, raising almost $480,000 in 2019 and so far in 2020, according to Elections Ontario data.

Don Valley East MPP Michael Coteau, who brought the second largest number of delegates to the convention, raised almost $225,000 for his campaign (during his speech on Saturday, Coteau said he had raised almost $300,000).

Graham raised almost $175,000, according to Elections Ontario, a similar amount as Mitzie Hunter, a former education minister and one of the handful of Liberals to retain a seat at Queen’s Park. But Graham sent twice as many delegates as Hunter.

Del Duca said he plans to develop policy quickly now, and said he’s looking forward to a vigorous conversation and healthy debate within the party in the roughly one hundred days until the party’s annual conference in June about the ideas the other leadership candidates championed.

“I think the most important thing is to hit the ground running, there really won't be any time to pause or rest,” he said in an interview with National Observer ahead of the convention. “It's about making sure that all of the pieces that are required to be successful in an election campaign are put in place as thoughtfully but also as quickly as possible.”

In terms of his priorities were he to become the next premier of Canada’s most populous province, he says that “where we will need to dramatically reverse course from the damage that Doug Ford has done will be in education and climate change.”

Ford’s cuts to education have led to ongoing strike action by all of the province’s major teachers’ unions. Del Duca promises to urgently restore education funding to at least the level it was at on the day before Ford won.

The @OntLiberal Party will begin its long road back to political relevance under the leadership of @StevenDelDuca, a former minister in the Kathleen Wynne government that was booted from power by Doug Ford in 2018.

The PC premier campaigned on a pledge to dismantle the cap-and-trade scheme that funded a slew of green initiatives under the former Liberal government, and has since ripped up hundreds of green energy contracts and shrunk conservation and energy efficiency efforts.

“That's a real crime on his part, a real sad statement on what I can only assume is Doug Ford's lack of a belief that climate change is a scientific fact,” Del Duca said.

As transport minister Del Duca paused the planning process for a planned Greater Toronto Area West Highway Corridor, a bypass route between municipalities west of Toronto and cottage country to its north that was to pass through farmland and near to the Greenbelt. The Ford government has resumed the process.

Perhaps the most controversial issue of his tenure in the Wynne government related to his efforts to add additional GO Transit stations, including the Kirby station in a rural part of his riding north of Toronto, which the Metrolinx transit authority had said was not necessary and stoked the ire of the province's auditor general.

Del Duca defended that decision when asked about it.

‘‘I was very proud to support a new GO station at Lawrence East, at Kirby and Park Lawn and elsewhere,” he said. “If I have one regret, it was that we didn't build more of them, and we didn't approve more of them.”

Del Duca is proposing to form an all-party committee to fight climate change, and has said he’d cut transit fares in half for those able to travel outside of rush hour to ease maximum capacity pressure.

He has promised to restore provincial funding to drivers who buy electric vehicles, to plant 800 million trees over a decade, and to introduce climate change and sustainability throughout the primary and secondary school curriculum.

But in terms of a ballot box issue, one government relations specialist who declined to be named said the environment and climate change can cut both ways.

For some, it is an imperative to work towards reducing emissions and lessening our footprint, this person said. “For others, they see it as a tax, they relate to it in terms of affordability and economic vulnerability.”

This person described Del Duca as politically astute, similar to Ford in that sense while sharply contrasted with him by his faith in government’s important role in tackling society’s biggest challenges.

Del Duca also acknowledged that climate change is a tricky topic to turn to electoral advantage, even when focused on the economic benefits of a green transition.

“I get nervous around the relatability to the average person in the street,” he said. “Will they grasp that fully? Like, will they really be able to touch and feel that? And it's possible they will. But I think we have to explain it, government has to explain it to them in emotionally compelling ways.”

“We're not quite there yet,” he said. “With the best of intentions, we say things that are kind of heavy on technical analysis.”

Del Duca says he has been criss-crossing the province, visiting more than 150 communities in the past 15 months, and he does sound like he has heard the message voters were trying to send the Liberals in the 2018 election.

‘A lot of people do feel like we had fallen out of touch,” he said. “Particularly with their cost of living anxieties, and that they felt that by the end of our 15 years in power that we were a little too focused on that Queens Park precinct and too focused on feeling like we had an entitlement to govern instead of earning it every step of the way.”

“Obviously, we were not a perfect government, we made some mistakes along the way,” he said. “But I believe in life, experience is the best teacher. And so I think having a front row seat to see how we did some things very well, and how in some cases, we fell a little bit short of the mark, I think actually gives me an advantage heading into the next phase.”

In the last election,

In the last election, Ontarians were so fed up with the government that the Liberals went from a majority to losing party status. According to Del Duca "we did some things very well...in some cases, we fell a little bit short of the mark." I guess we can expect better spin-doctoring from the Ontario Liberals going forward.

I am disappointed in all

I am disappointed in all those old time liberals who were endorsing Del Duca. I got dozens of messages from prominent liberals promoting him. But we need fresh blood and a new vision. Several candidates, including two women candidates, showed that they were listening to people and were dynamic and positive. Del Duca seems to me an establishment person and frankly I am not sure how I will Vote in the next election.

I really hope that Del Duca

I really hope that Del Duca does a good job. Trailer Park Trump has to go and Conservatives have got to stop this populist nonsense. Catering to the most ignorant and most upset among us is not a healthy way forward...in fact, it is the opposite of leadership.