A colourful day for Ontario's Liberals, and a pool party 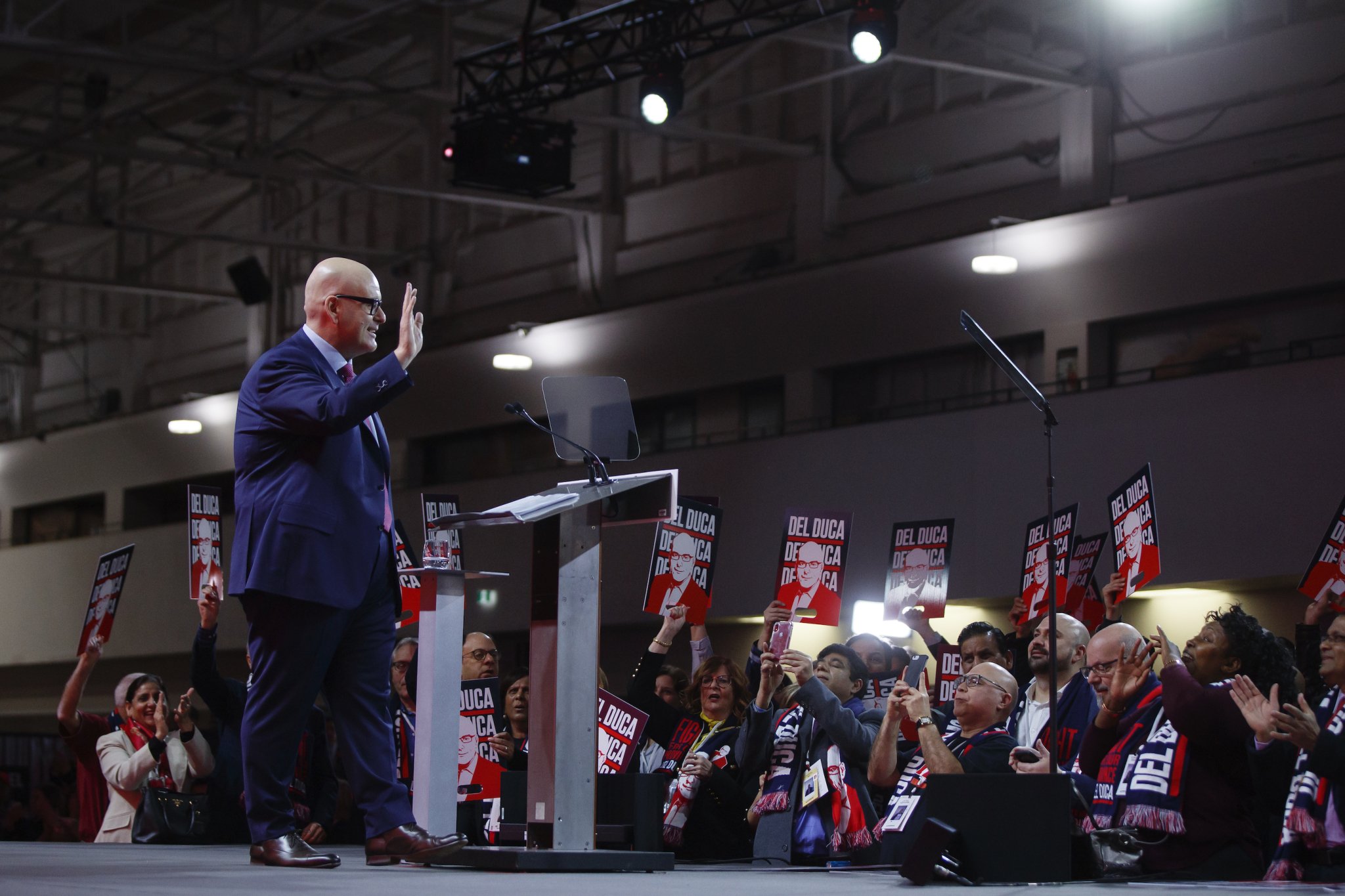 Steven Del Duca acknowledges supporters during his speech at the Ontario Liberal leadership convention on Mar 7, 2020, in Mississauga. Photo by Cole Burston
Previous story
Next story

It was a day of uplifting speeches and optimism for roughly 3,000 supporters of the Ontario Liberal Party who convened in a cavernous conference hall in Mississauga on Saturday to elect a new leader.

Optimism has been hard to come by for the party in the last two years, reduced to a handful of seats at Queen’s Park after 15 years in power and running on financial fumes since losing official party status and as fundraising dried up.

The partisans pitching for the six candidates aiming to lead the party out of the political wilderness whooped and cheered as they each took their turn to present a vision for the future.

They were easily identified by the colours their preferred candidates for leader had adopted; red and yellow for Mitzie Hunter, red and blue for both newly-minted leader Steven Del Duca and his nearest competitor Michael Coteau, purple for Kate Graham, red and green for Alvin Tedjo, and red for Brenda Hollingsworth.

While front-runner Steven Del Duca ultimately won handily in the first round of balloting, the loudest applause on the convention floor came during the speeches of second-place Michael Coteau and third-place Kate Graham.

“We can once again have a bold, activist government that works on behalf of Ontarians to take on the biggest challenges of our generation,” Coteau said in a speech that was repeatedly interrupted by the cheers and chants of his supporters.

“I’m here because this moment calls for us to do something extraordinary,” said Graham, who surprised many by securing more than double the delegate support of current MPP Mitzie Hunter. “It is time for something new,” she said to raucous cheers.

There was a lot of talk of doing politics differently, but in the end it was the transportation minister in the former government of Kathleen Wynne who will lead the party into the 2022 election.

“Dougie’s going to do a cannonball into that pool and we’re all going to be soaked,” said one Liberal supporter, about the pool new Liberal leader Steven Del Duca built too close too conservation land and without proper permits.

“I want to build an Ontario where genuine opportunity is real for everyone, where both entrepreneurs and workers can thrive, and individual success is only limited by talent, effort, and dedication,” said Del Duca, whose campaign plastered his face on the scarves they handed out to his supporters, who made up a clear majority.

For all the talk of rising above partisan politics, the party and its new leader were quickly engulfed in the cut and jab of political point-scoring. Both the governing Progressive Conservatives and opposition New Democrats attacked Del Duca as a remnant of the Wynne government and pointed to recent news that he had built a swimming pool in his backyard abutting conservation land without securing the requisite permits.

“Here’s a guy who was a cabinet minister, who was the right-hand man of the premier for many years and somehow didn’t know he wasn’t allowed to build a pool bordering a conservation area, c’mon, it shows a level of arrogance that Ontario voters turned their backs on in 2018,” said Paul Calandra, the Government House Leader.

“There’s a very clear reason why the attacks have already began and they’re not going to stop,” Del Duca told reporters at his first news conference as leader, ducking multiple questions about the pool. “And that’s because they’re desperate.”

But even Liberals were upset about the misstep.

Dane Grgas, a transit advocate who backed Coteau, said it was frustrating that Del Duca had gotten himself caught in the swimming pool snafu and that he had not acknowledged it ahead of votes to send delegates to the convention held early last month.

“Dougie’s going to do a cannonball into that pool and we’re all going to be soaked,” he said, referring to Ontario Premier Doug Ford. 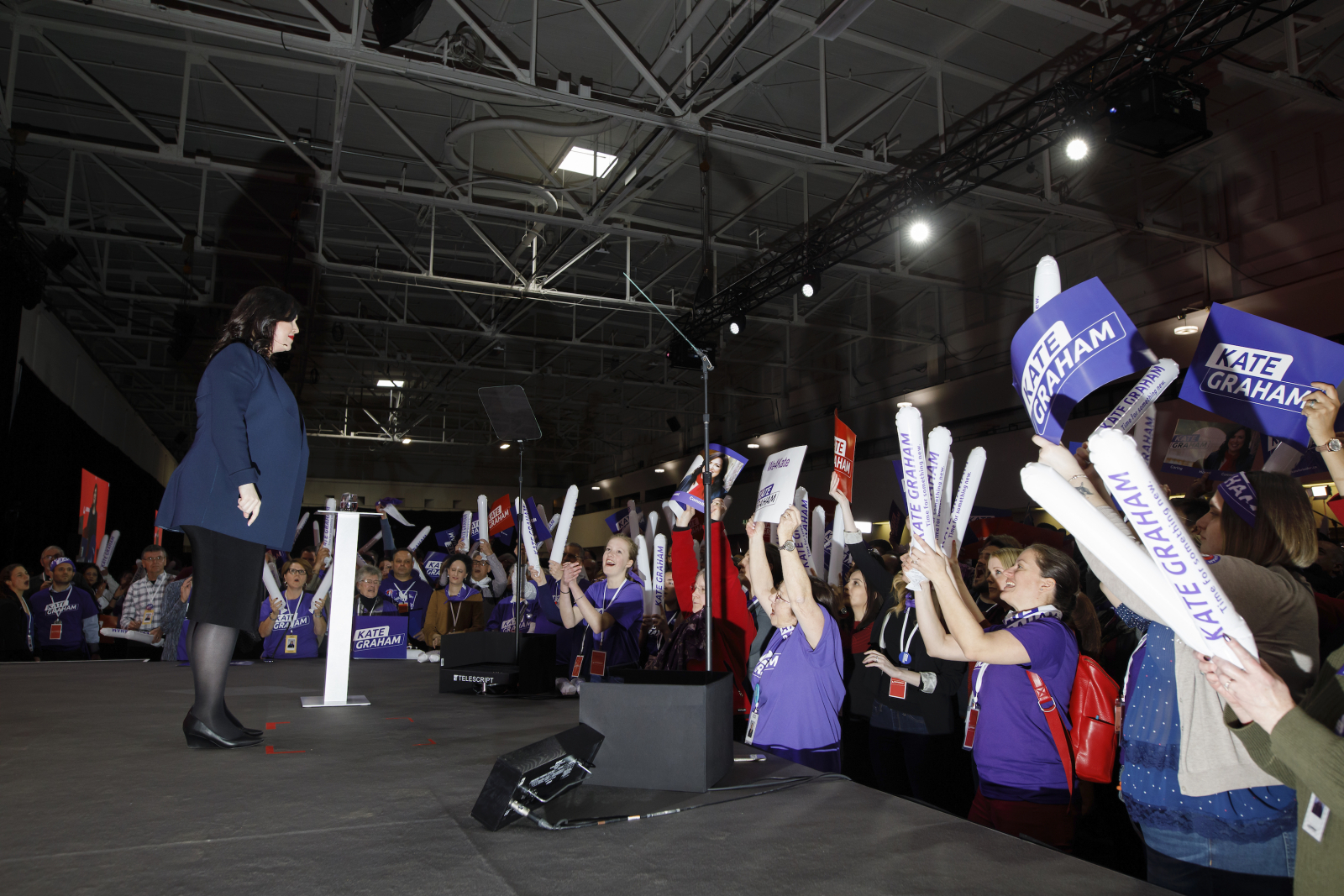 Candidate Graham was also unable to mount a vigorous defence of Del Duca when National Observer asked her about the issue.

“Obviously the rules are important, and they need to apply to everyone equally,” she said with a wry smile. “I think it’s important we have politicians people can trust and it’s an expectation we all need to hold of each other.”

The NDP Taras Natyshak said Del Duca’s decisive victory showed the Liberals have shifted sharply towards the right, leaving the NDP as the only truly progressive choice heading into the 2022 election.

“This is someone who took a corporate approach to funding transit, funding public infrastructure in the province, and someone who believes that there is a separate set of rules for himself instead of other people,” he said, referring to the pool snafu.