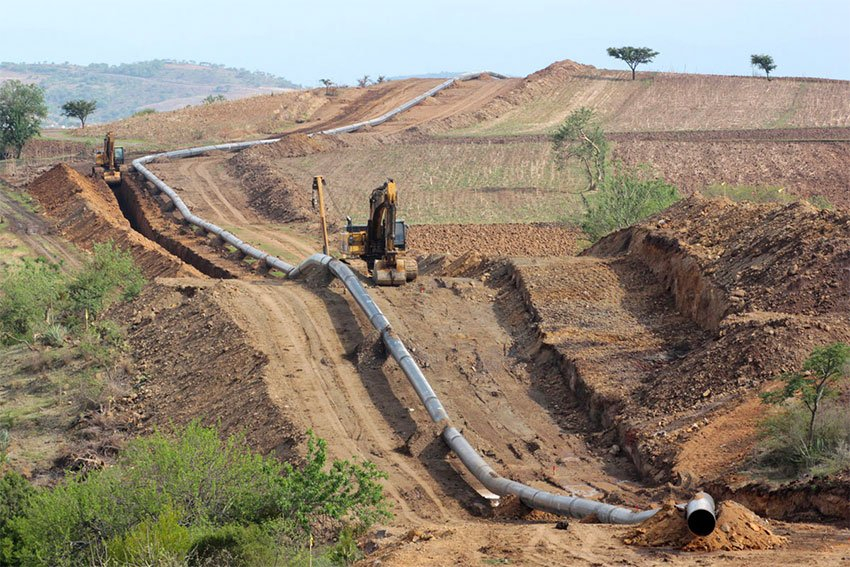 Pipeline being built in Mexico.
Previous story
Next story

A day after federal and provincial ministers and Wet’suwet’en hereditary chiefs announced a proposed arrangement over the Coastal GasLink pipeline, TC Energy Corporation came out with an announcement of its own.

In a statement, the company claimed it had the required permits to proceed with Coastal GasLink. Despite traditional Wet'suwet'en leaders’ ongoing opposition to the project, TC Energy said it planned to resume construction.

The decision should have come as no surprise.

TC Energy (formerly TransCanada) has been accused of running roughshod over Indigenous rights in its Mexico projects. With Coastal GasLink, its controversial British Columbia project in Canada, it seems the company may be employing those same tactics.

“Without question the recent so-called negotiations failed to resolve the primary issue of the pipeline itself,” said Grand Chief Stewart Phillip, president of the Union of British Columbia Indian Chiefs (UBCIC). “We are no closer to the resolution of those issues than we were two weeks ago. It looks pretty dismal for any resolution of these deeply entrenched positions on the part of Coastal GasLink and the Wetʼsuwetʼen people.”

The decision by TC Energy to press on with its Coastal GasLink project in Canada fits a pattern of moving ahead despite opposition. The company has turned a deaf ear to objection from indigenous people before. In the United States, the Rosebud Sioux and Fort Belknap Indian are fighting TC Energy’s Keystone XL pipeline proposal. And in Mexico, the Nahua, Totonaca, Otomí and Tepehua have spoken out against TC Energy’s construction of pipelines on their land.

TC Energy is a company with the resources to weather long storms and to overcome enormous hurdles. Its 2019 revenue was over $13 billion, and its profits approached $4 billion. (All monetary figures in this story are in U.S. dollars.)

“Numerous gas projects in Mexico have experienced community conflict, and last year the president of Mexico, Andrés Lopez Obrador, said that he was going to change or cancel them,” said Alejandra Barriguete, a Mexico City-based researcher and journalist. “He also said that the gas contracts weren’t a good deal for Mexico. This caused huge conflict with the companies.”

TC Energy has seven natural gas pipeline projects in Mexico, five of which are operational and two others — the Tula project and the Villa de Reyes project — that are still under construction. Those two, both signed when the last president was in power, are the focus of conflict now. And Lopez Obrador has promised to be more sensitive than his predecessor to the concerns of local communities, including Indigenous people, who might be negatively affected by pipeline projects that are still being built.

“In one indigenous community, the pipeline was set to go within 200 metres of people’s homes,” said Barriguete. “They were worried. What happens if the pipeline explodes?”

The Nahua, Totonaca, Otomí and Tepehua, among other indigenous people, have stood together to voice concern over these two projects. They claim the approval process was hurried, and without sufficient consultation as a result of TC Energy’s eagerness to profit from Mexico’s growing natural gas market

“In the past five years there’s been an increased focus on the Mexican gas and power market,” says James Fowler, senior energy analyst for the Americas at Independent Commodity Intelligence Services. “Natural gas from U.S. shale operations is cheap, and Mexico itself doesn’t have much supply. The result has been a pipeline boom in Mexico to supply gas for electricity generation.”

In January Lopez Obrador made it clear that the Tula line, as presently planned, will be cancelled, as it passes through land sacred to the Nahua people, and risks damaging a nearby aquifer.

“The government has promised the Indigenous people consultations so that the projects can move forward,” says Barriguete, who authored The ABC of Gas Pipelines, a report published by Mexicans Against Corruption and Impunity. Referring to TC Energy’s two uncompleted projects, Barriguete said that the Lopez Obrador administration is “going to do what they can, including on environmental issues, so that there won’t be the same problems as before.”

An activist government and a company in a hurry

The Mexican Energy Secretariat’s own social impact report on the Tula project was critical of the approach taken by TC Energy. It claimed the Canadian company lacked understanding of Mexico’s legal and cultural environment, saying that this was “fundamental in order to establish an adequate strategy for timely social investment.”

Criticism included TC Energy’s lack of awareness of Indigenous culture — specifically in the context of sacred sites and traditional plants and medicines — poor identification of relevant stakeholders, and inadequate communication with government agencies. There was concern for the security of Indigenous women and girls due to the influx of male labourers unknown to the communities. Physical disruption to the local populations was also a worry, given that many people lived in proximity to the pipeline.

“There is no question that governments at all levels, as well as energy corporations, tend to believe that Indigenous rights are optional,” said Grand Chief Stewart Phillip. “They believe that these rights can simply be brushed aside in their efforts to ram through uninvited and unwanted pipeline projects.”

In Mexico, the threat is not only to natural resources, but also to specific communities, as the Tula line is designed to pass in proximity to villages.

“In one Indigenous community, the pipeline was set to go within 200 metres of people’s homes,” said Barriguete. “They were worried. What happens if the pipeline explodes?”

The lack of public consultation, according to Lopez Obrador, meant that both the previous Mexican administration and TC Energy were acting outside the law, as they had failed to properly consult the local population when negotiating contracts for the two projects. However, the Energy Secretariat raised these concerns after contract signature. Consequently, any delay due to the previous government’s action now puts the force majeure onus on the Lopez Obrador administration — not on the company — which means that the Mexican people are on the hook for compensation.

“The problem in Tula was that, when the contract was signed, the people hadn’t approved the project,” said Barriguete. “The company went ahead and started building, and the people got a temporary injunction to stop it. Some people also showed up with tools in an attempt to physically dismantle the pipeline.”

The issue is strikingly similar to the one that TC Energy faces with its Coastal GasLink project in Canada, wherein the Wet'suwet'en hereditary chiefs felt ignored, legal action was taken, and there are physical attempts by local people to block the project.

And, as in Canada, in Mexico TC Energy is not backing down. Late in 2018 the company released an open letter in Spanish, widely reported on in the Mexican press, claiming that local communities had subjected them to “irrational requests, which border on extortion.” The letter further claimed, without going into detail, that unnamed groups were conducting activities “outside the law.”

The result, said the company, was that after three years of effort, the permit issuing process had been paralyzed, delaying construction and increasing costs.

We should not be surprised by

We should not be surprised by the Mexican situation. If we are at all informed, we can figure out why TransCanada now goes by TC. It hopes not to be recognized as the outfit that bullied and lied to American farmers and land owners as it prepared to bull its way through prime farmland, run over the Ogallala aquifer, and in every way possible, cut costs and ignore local populations. It's all in the record........and I'm sure Bold Nebraska would share the horror stories with anyone who asked.

The degree to which white city folk don't give a damn about the rural folks who produce our food, or indigenous folk who've preserved a healthy land base for millenia, or the poor of foreign countries, is astronomical. We'll all hear it loud and clear as pipeline proponents scream for the police to enforce the rights of this wealthy and arrogant company.

The fracking of our arable land and potable water will continue for 40 years though........that pipeline guarantees it, once its built. A sound investment? On a warming planet? Likely not, but money talks, the poor of the earth take the risks and get to do the cleanup. Though who's going to pay them to do that is a moot question. For damn sure, it won't be TransCanada.