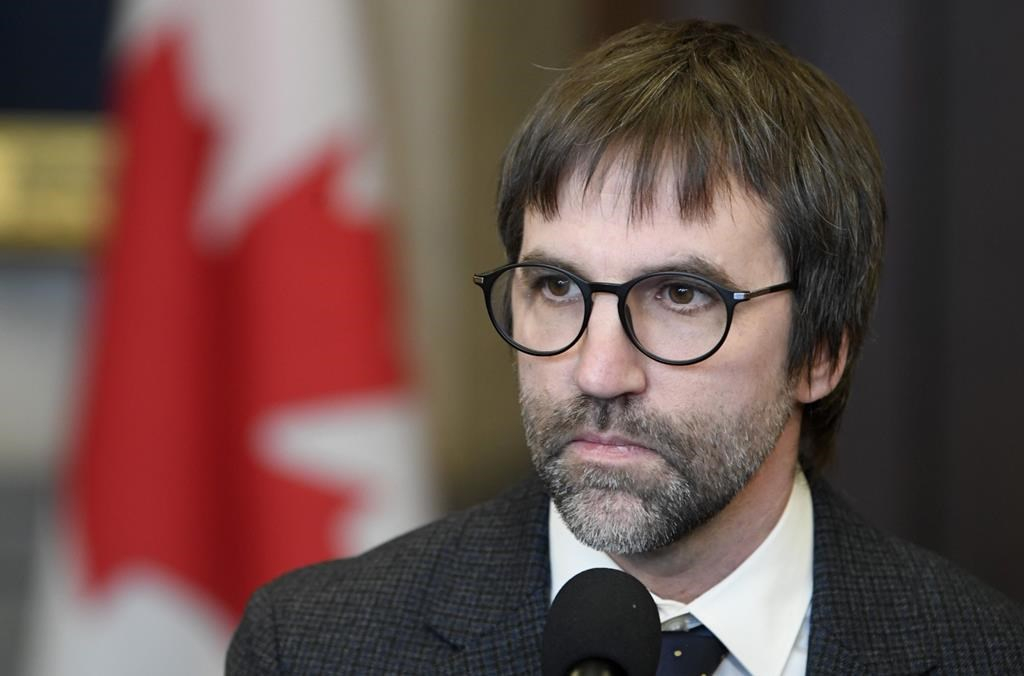 Minister of Canadian Heritage Steven Guilbeault speaks with the media in the Foyer of the House of Commons in Ottawa on February 3, 2020. File photo by The Canadian Press/Adrian Wyld
Previous story
Next story

The Public Health Agency of Canada has posted guidelines aimed at helping event planners figure out whether to cancel mass gatherings of people as the federal government works to quell the potential spread of the novel coronavirus.

The next best thing to stopping the virus completely is to slow it down, public health officials have said, and try to delay widespread community transmission as long as possible to ease the burden on the health-care system.

In the United States, where COVID-19 has sickened more than 800 people and killed at least 30, sports teams are playing without crowds, several concerts have been cancelled and some schools and universities are shutting down in an effort to keep the virus from spreading.

Canada, meanwhile, has seen very limited domestic transmission of the virus, and event planners say it's largely business as usual until that changes.

Still, concert promoters, major sports leagues and festival organizers say they are watching carefully to decide whether they should bring crowds of people together to share the same space.

"We have been told by public health there is no need to cancel events or minimize social gatherings at this point," said Erin Benjamin, president of the Canadian Live Music Association. "I think that's going to be public health's determination, and I hope we don't get to that."

The newly released federal guidelines urge organizers to assess risk, highlighting factors like the ages of the attendees, given the virus hits older populations hardest, and whether they are likely to be arriving from regions that have been impacted by COVID-19.

They also offer ways to reduce the risk without cancelling the event altogether, such as by limiting the number of people who attend, staggering arrivals and departures, making more hand-washing stations available, or even live-streaming activities online.

But they don't dictate whether certain types of events should be shut down, and under what conditions.

Canada develops COVID-19 guidelines on when to cancel major events

"You may be in a context where you have a very strong healthy system where you can say 'OK, well we will welcome this event because if there's a problem we'll be able to contain it,'" Canadian Heritage Minister Steven Guilbeault said Tuesday in Ottawa.

"On the other hand, you may be in a situation where you feel that you can't do that."

Earlier Tuesday, the band Pearl Jam announced it would postpone the first leg of its tour, including several stops in Canada, over concerns about COVID-19. It's the first major act to cancel a live performance in Canada because of the virus, according to the Canadian Live Music Association.

The Broadbent Institute, a policy think tank, also said Tuesday it would postpone a summit planned for later this month in Vancouver, citing advice from the provincial medical health officer. B.C. has now recorded Canada's first death linked to COVID-19.

"The Institute prides itself on ensuring that our events are safe and inclusive environments, and we can no longer say with confidence that a summit held in March would be able to meet this standard for all participants," the think tank said in a statement.

Another policy conference, this one planned by the Manning Centre for later this month in Ottawa, is going ahead, organizers said Tuesday. But they are changing their meal setups to minimize contact between participants, and will be making hand sanitizer available.

Meanwhile, the NHL is monitoring the spread of the virus in Canada and the United States and putting contingency plans together in case large gatherings become unsafe.

As for potential school closures and limiting access to public spaces, chief public health officer Dr. Theresa Tam said that will also be up to local and provincial governments if transmission becomes widespread in their area.

"The measures have to be balanced against what is going on on the ground, and you can't sort of blanket a whole geographic area without really paying attention to the details on the ground," Tam said at a briefing Monday.

Each jurisdiction has their own public health laws that govern when they should trigger those kinds of measures, she said.

While the risk is low, Canadians can take personal measures to protect themselves and others against the spread of the virus, federal Health Minister Patty Hajdu said Tuesday. Those include staying home when sick, staying two metres away from others and coughing and sneezing into their elbow.

Foreign Affairs Minister Francois-Philippe Champagne said he's in contact with his counterparts in Italy, which is currently under lockdown because of a massive spike in the number of cases.

He said he wants to learn from that country's experience, but doesn't expect to see massive widespread quarantines in Canada.

This report by The Canadian Press was first published March 10, 2020.