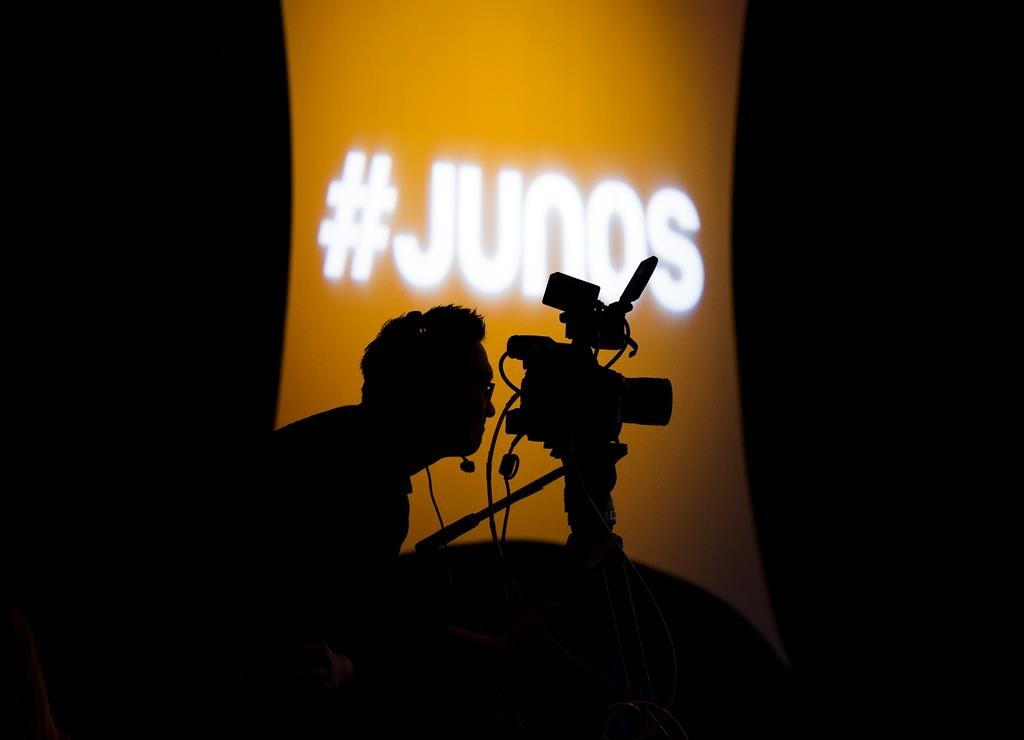 A videographer looks through his camera during the 2020 Juno Award nominee press conference in Toronto on Tuesday, January 28, 2020. File photo by The Canadian Press/Nathan Denette
Previous story
Next story

A mere hours before the Juno Awards events were set to officially kick off in Saskatoon on Thursday, organizers slammed the brakes on the festivities, saying Canada's biggest celebration of homegrown music wouldn't go forward over concerns about the COVID-19 outbreak.

And while the decision didn't surprise some local artists or some of the industry players who had already descended on the Prairie city, it was still a disappointment for many.

Sunday's awards show was to take place in front of an audience of thousands at the SaskTel Centre with performers including Daniel Caesar, Tory Lanez, and City and Colour and broadcast on CBC, but there were also several weekend events timed to capitalize on a surge in visitors.

"It's kind of heartbreaking for Saskatoon," local musician Fabian Minnema said after wrapping his set at a performance area in the airport to welcome new arrivals. It was dismantled shortly after he finished playing.

He wondered how locals bars, hotels and restaurants would fare after spending the better part of a year expecting a boost in business.

"It's bad news for everybody," he said.

The Canadian Academy of Recording Arts and Sciences said Thursday morning the decision was made with guidance from local tourism and provincial health authorities.

"We are all devastated," Junos and CARAS president Allan Reid said in a statement.

"We, along with our partners, wish this decision didn’t have to be made but ultimately, we know it is the right one. The global impact of COVID-19 is unprecedented and we're incredibly appreciative of our partners who have remained beside us as we navigate through these uncharted waters."

Hours after the announcement, the Canadian Screen Awards said it was also scrapping its glitzy film and television gala, set for March 29 in Toronto and also set to air on CBC. Those organizers also cancelled Canadian Screen Week events in Toronto, Montreal and Vancouver that were to lead into the show.

Back in Saskatoon, members of Toronto pre-teen act G-Force tried to make the best of the situation after hearing the news on a flight from Toronto. The group was up for children's album of the year, and entered the race as the youngest nominees in the category's history.

"There were some tears," said their manager Francesca Nicassio while standing outside the airport gate.

"But we understand. It the best for everybody. And they're going to make the best of it. We're going to spend the night in Saskatoon, and maybe put on a little concert at the hotel. Who knows?"

Ava Ro, one of the four girls in the group, said the group had high hopes for the Junos.

"We're all pretty disappointed because we were going to meet a bunch of icons," she said, pointing to planned host Alessia Cara as one person the group was especially looking forward to seeing.

"You know, it all happens for a reason," she said.

"We want everybody to stay safe, so we hope everybody can follow the precautions."

It also came after some artists had already checked into their hotels earlier in the week to prepare for Juno Week events. Shortly before the cancellation, the SaskTel Centre was still selling tickets to Sunday's show.

Still, some were reluctant to attend the Junos even before the show was scrapped.

Vancouver indie rock outfit Said The Whale tweeted Thursday that they had cancelled their plans to attend because of the global pandemic. And Toronto-based music publicist Eric Alper said he scrapped plans to attend and advised the 16 artists he works with not to go either.

Organizers faced a flood of calls on social media for the event to be cancelled in the 24 hours leading up to Thursday's announcement, including some from doctors and politicians.

"I wish that CARAS, the Juno committee, might have been able to do this a couple of days ago, before people started to travel and make real plans for it. But that's the way things go when not only in this country but around the world — we're all learning about what could potentially be the new normal over the next couple of months."

The Junos rotate through cities from year to year, providing an economic and tourism boost for the host region, with legions of artists and fans descending on the area.

They also offer a huge level of exposure to emerging artists and excitement for host cities.

Pop singer Cara was set to host with a leading six nominations. On Instagram on Thursday, she said she learned of the cancellation immediately after landing in Saskatoon on Wednesday night.

This was the second time Saskatoon was picked to host the bash, after the Junos in 2007 when Nelly Furtado served as host.

Some artists and managers wondered how and when the Junos would hand out its awards.

"I can assure you we will find a way to appropriately honour all 2020 nominees and special award recipients," the Junos president added in his statement.

— With files from Victoria Ahearn in Toronto.