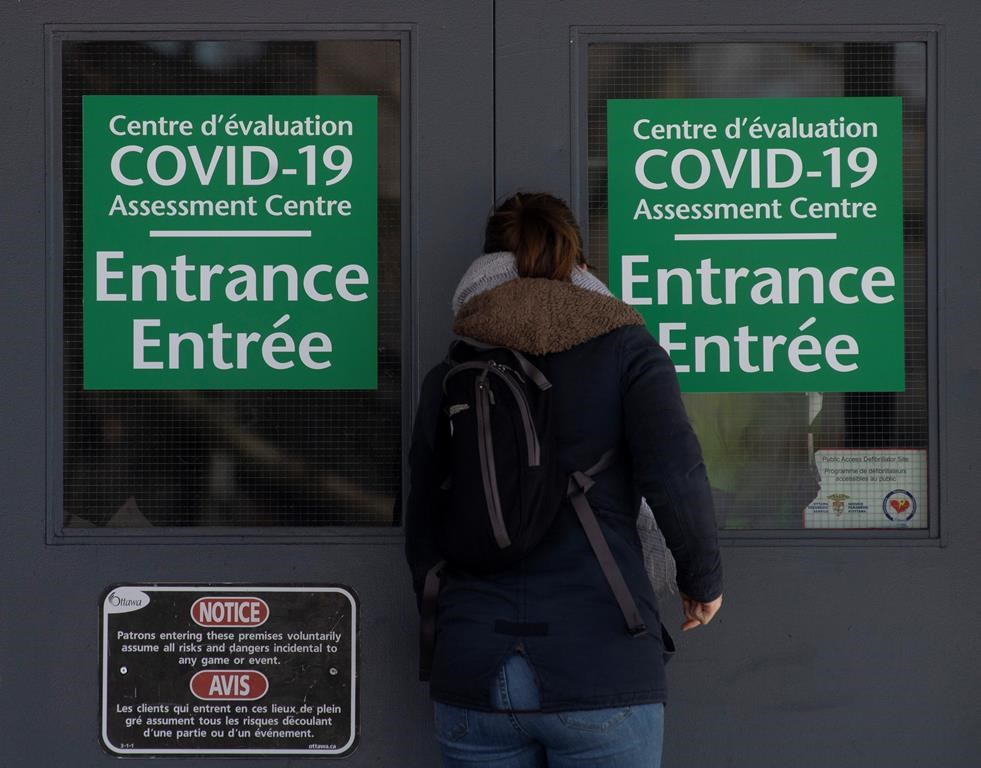 A person makes their way to a COVID-19 assessment facility Saturday, on March 14, 2020 in Ottawa. Photo by The Canadian Press/Adrian Wyld
Previous story
Next story

Many of the hundreds of people descending on one of Canada's first dedicated COVID-19 assessment centre went home without being tested on Saturday as they fell short of the criteria requiring them to be screened for the virus.

The Ottawa screening centre was a popular destination on Saturday morning, with about 200 people showing up when doors opened at 9 a.m.

But many of them, as well as others who trickled in throughout the day, found they didn't meet the criteria to be swabbed for signs of the disease caused by a novel form of coronavirus.

More facilities like this one are expected across the country in the coming days and weeks. For most, the centre operates as a revolving door.

Some showed up seeking reassurance after contracting common colds. Others walked in with no symptoms at all.

Abdullah Khan, 19, was sent home shortly after he arrived Saturday. He had a flu last week and has suffered from a lingering cough, but felt anxious because he has other respiratory issues.

"I heard that if you have asthma you could be at further risk," he said.

The criteria for testing was much more specific, according to public health officials. Anyone who didn't have a cough or fever, and who had not recently travelled out of the country or been in contact with a confirmed case of COVID-19 were turned away.

Saturday's trend continued one established on Friday when the centre first opened to the public. Ottawa Hospital officials on site said less than half of the 311 people who showed up for assessment on Friday needed to be swabbed.

The assessment centre was set up to ease the burden on local emergency rooms.

Many of the hundreds of people descending on one of Canada's first dedicated COVID-19 assessment centre went home without being tested on Saturday, March 14, 2020, as they fell short of the criteria requiring them to be screened for the virus.

Some have showed up to the assessment centre simply because they said they couldn't get through to public health any other way.

The volume of calls to Ottawa's COVID-19 help line have been doubling by the day, according to Ottawa medical officer Vera Etches, and non-nursing staff have had to be called in to help.

Initially the line was getting about 200 calls per day, but by Thursday it was up to 1,600, Etches said, making the drop-in assessment centre the first point of contact for some people concerned about the virus.

"I have been the sickest I've been in years, likely just the flu, but had travelled back from the states and have had a fever," said 34 year-old Sarah Macindoe outside of the facility Saturday.

She had been trying to get through to public health and telehealth for days, but wasn't able to reach anyone and doesn't have a family doctor. She finally felt well enough to get out of bed and venture to the arena to be assessed, and was promptly set home without being tested.

"Which was great, at least I can tell people I don't qualify and it's fine," she said.

Ottawa's assessment centre is operating out of a community rink just south of downtown, now covered in signs to let people know it's been transformed into a COVID-19 medical screening facility.

People were met outside by fully gowned medical officials and were given surgical masks before they were allowed in.

Caitlin Comeau was tested for the virus Saturday, and left the centre in a mask to wait for her results in two or three days.

She recently returned from Myrtle Beach, and has since developed a cough.

"If you meet all the criteria, I think it's good to come in if you can," she said after her experience.

Meanwhile, an east Toronto assessment centre based out of Michael Garron Hospital was urging people not to show up out-of-the-blue at all. It said that would-be patients should call ahead of time to make an appointment. But it also cautioned that it was experiencing such a high volume of phone calls that not all of them were getting through.