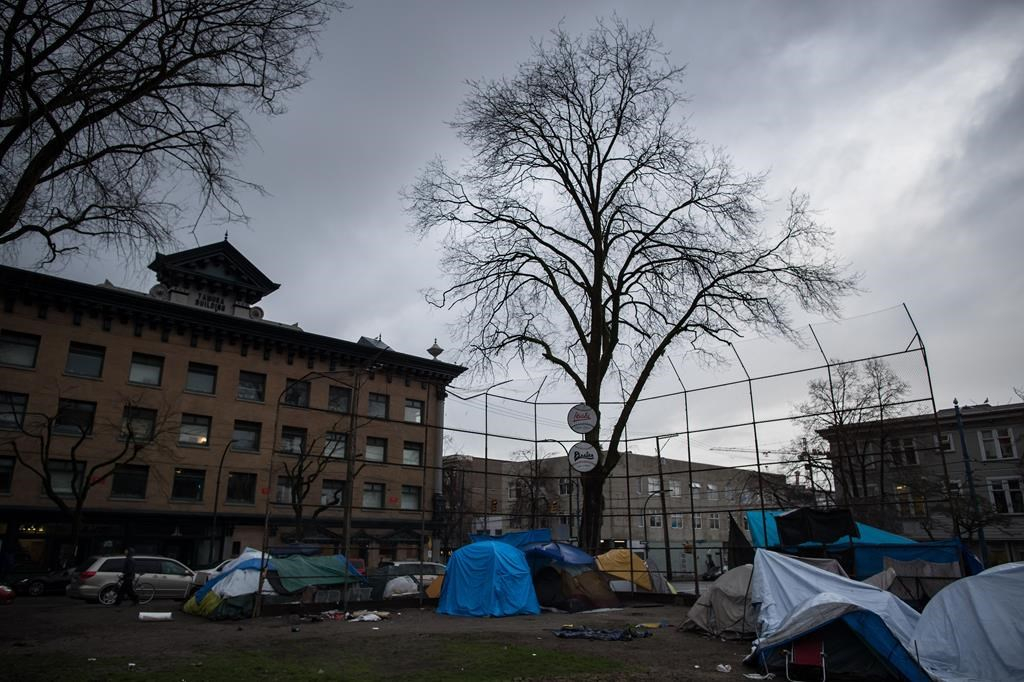 Tents are seen on a baseball diamond at a homeless camp at Oppenheimer Park in the Downtown Eastside of Vancouver, on Friday December 13, 2019. Homeless, File photo by The Canadian Press/Darryl Dyck
Previous story
Next story

Homeless people staying in close quarters at shelters, tent cities and warming centres are especially at risk for COVID-19, says a community advocate who is working to ensure hand-washing stations and clean bathrooms are available in Vancouver.

Chrissy Brett said social distancing to reduce the risk of spreading the novel coronavirus is difficult for people who are housed in crowded spaces and lining up in groups to use bathrooms and get food.

"When shelter mats are two feet away from each other how exactly are you going to do that?" she said in an interview. "Or when you're told the shelters are full and there's 100 people that are sitting in (a warming centre) at night trying to stay warm because there's nowhere else for them to go."

With more cities suspecting community transmission of the novel coronavirus, the Canadian Alliance to End Homelessness has put out an urgent call for more emergency shelter beds to protect Canada's vulnerable homeless population.

People who sleep in shelters or hunker down outside already have a lower life expectancy, and often have underlying health conditions that put them at greater risk if they develop COVID-19, president Tim Richter said.

And they are often gathered together in large numbers in shelters. The fact that many can't follow public health advice to protect themselves or limit the spread of the virus makes for an even more dangerous situation.

The alliance estimates as many as 35,000 people are homeless on any given night in Canada.

If an outbreak were to happen in a 700 or 800 bed facility, it could have major implications for the entire community, Richter said.

The alliance has called on governments to create more emergency shelter spaces so people can spread out.

He said shelters and outreach workers also need access to testing, so cases can be quickly identified, and front-line workers need a supply of personal protective equipment to guard themselves against the virus.

Richter said public health agencies are aware of the need for action at Canada's shelters to protect their clients, workers and entire communities.

"We just need to move quickly," he said.

Social Development Minister Ahmed Hussen said he's been working with the mayors of major cities to co-ordinate a response to the risk for homeless people.

The federal government is also concerned about how difficult it would be to track exposure if the virus were transmitted through the homeless population, and understands the call to prioritize testing for them, he said.

The five largest shelters in Ottawa have been working together with public health agencies to try to establish new measures to protect their residents, according to a statement released last weekend.

They've all stepped up cleaning their facilities, and said they're prepared to assess and test potential cases of the virus among their clients.

The Shepherds of Good Hope in Ottawa has also started turning away donations and volunteers to some of its programs to protect its roughly 270 residents.

In Vancouver's Oppenheimer Park where about 160 people are living in a tent city, Brett said a volunteer recently brought large garbage cans of soapy and clean water after one of the park's two washrooms was closed for maintenance.

Sandra Singh, general manager of arts, culture and community services for the city, said 11 hand-washing stations would be opened on Tuesday throughout the Downtown Eastside, where people also live in single-room occupancy buildings.

"Right now, there is very little in the way of sanitation services for those living in (single-room occupancy buildings) and in shelters and those who are homeless," he said.

"This poses a risk for both residents and staff."

Stewart said the city, the local health authority and BC Housing are considering "all options for people to safely self-isolate."

The mayor said he would be speaking by phone on Tuesday with Deputy Prime Minister Chrystia Freeland about the city's need for funding to provide resources to keep the homeless and the "underhoused" safe.

Jeremy Hunka, spokesman for the Union Gospel Mission in Vancouver, said many of the older people staying at the organization's shelter are more susceptible to COVID-19, especially if they have underlying health conditions.

"We know that some of our homeless guests, just by being outside and struggling and being homeless, have lower life expectancy so it's deeply disturbing to us should the virus become more widespread," he said.

Hunka said the mission no longer serves food in a large dining hall, opting instead to hand out packaged meals to those who need them.

— With files from Laura Osman and Jordan Press in Ottawa.