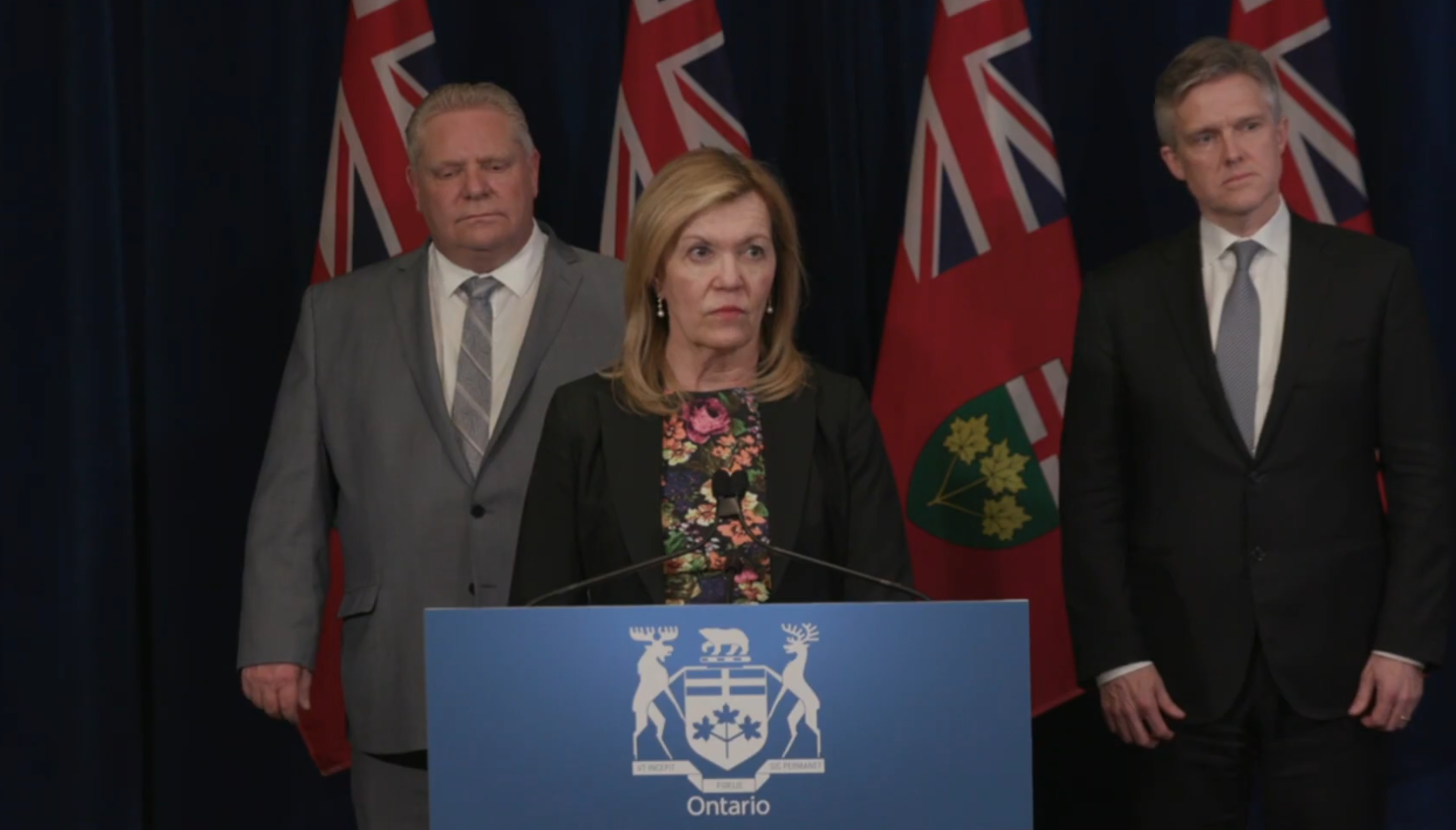 Ontario is struggling to deal with a surge in people seeking COVID-19 testing that has pushed wait times for laboratory results out to four days, which the province’s health minister called unacceptable on Wednesday.

The province recorded 23 new cases of COVID-19 at its daily morning update, bringing the total to 206. It also showed that pending test results had more than doubled from the previous day, to 3,379.

“A four-day wait is not acceptable, and so we are working on doing much better than that and I anticipate that we will be caught up very shortly with the lab tests,” Health Minister Christine Elliott said at a news conference with Premier Doug Ford and Finance Minister Rod Phillips.

Ford said that the province was conducting 2,000 COVID-19 tests a day, although one of the province’s top medical officials later said that lab capacity is less than 1,000 per day currently.

Associate Chief Medical Officer of Health Dr. Barbara Yaffe said that Public Health Ontario’s testing capacity is improving and other hospital test sites are coming online, but was unable to say when the province might reach its target of processing 5,000 tests a day.

The province’s chief medical officer of health, Dr. David Williams, said the province is working with the federal government on arranging distribution of a large shipment of testing supplies that a week ago was due to arrive in two to three weeks.

He said in the meantime, test turnaround would be prioritized according to need, with patients admitted to emergency departments and intensive care units as well as healthcare workers bumped to the front of the queue.

“Right now, to test everyone just because they want to be tested, we don’t have that capacity,” Williams said. “We want to make sure we have the capacity to test those who really do need testing and to do it in a timely fashion.”

Ontario is struggling to deal with a surge in people seeking COVID-19 testing that has pushed wait times for laboratory results out to four days, while people in their 30s are now requiring ventilation.

Adding to the challenge of triaging those who feel they may be experiencing the symptoms associated with COVID-19 (shortness of breath, high fever, soreness), the province’s Telehealth medical information line crashed as 800 more lines were added to deal with rising call volumes.

Elliott said she expected it to be "up and running again very soon" and advised people concerned they may have contracted COVID-19 to use a self-assessment tool that was recently added to the government’s coronavirus website.

The health minister also said that while younger people more often seem to be carriers who do not experience the most severe symptoms, there have recently been situations where “people in their 30s are now becoming very ill and are having to be placed on ventilators.”

“We’re also seeing it in places like the United States, in New York for example. Very significant increase in cases. They are finding their health system is being severely overburdened right now. We don’t want to get to that situation in Ontario.”

Elliott said the province has an “adequate supply (of ventilators) for what we are dealing with right now. That said, we have ordered 300 more ventilators that we will be receiving shortly.”

She and Ford also noted that auto-parts manufacturers in the province have offered to re-tool factories to produce more ventilators.

“We know that with many borders shutting down we need to find our own sources internally and people are stepping up,” she said.

Canada and the United States are closing their shared border to "non-essential travel," the leaders of both nations have confirmed on Wednesday, after Canada first started restricting entry on Monday.

Elliott also said the government would shortly update its guidance to ensure that healthcare workers that return from travel are also self-isolating for 14 days as per the advice for all other travellers.

“You can’t have a separate category for healthcare workers. It is what it is, the isolation period is 14 days, it needs to apply to everyone.”