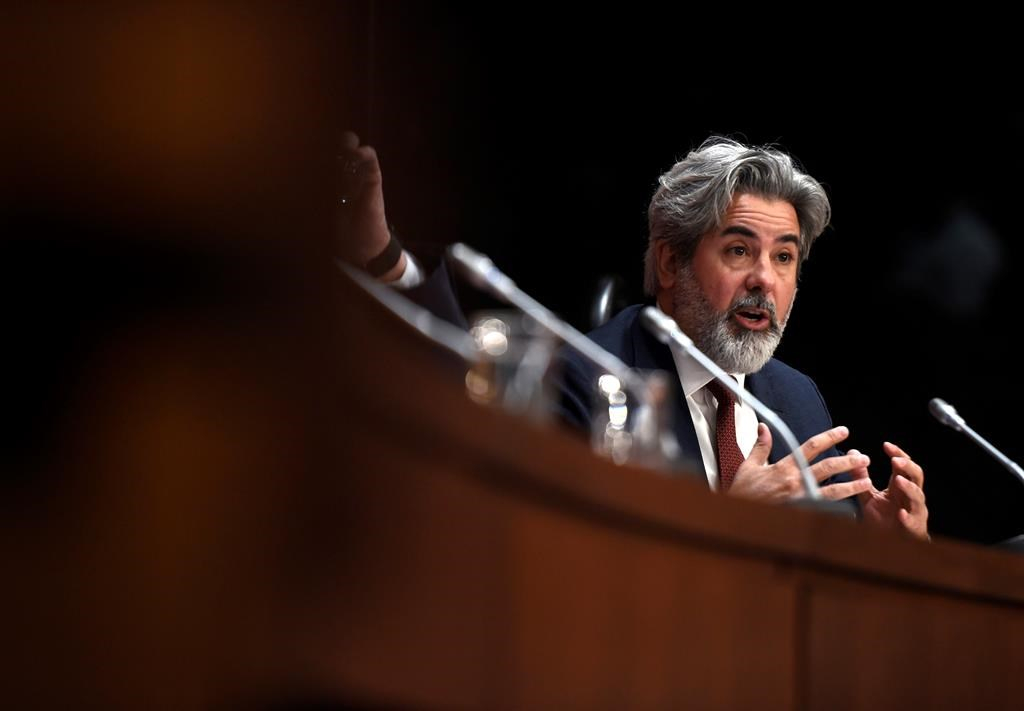 Leader of the Government in the House of Commons Pablo Rodriguez speaks at a press conference on COVID-19, at West Block on Parliament Hill in Ottawa, on Wednesday, March 18, 2020. Photo by The Canadian Press/Justin Tang
Previous story
Next story

Parliament will be recalled to deal with legislation to free up billions in financial aid for Canadians and businesses to weather the COVID-19 crisis, likely next week.

But it won't be business as usual in the House of Commons and Senate, which adjourned last week until April 20 as part of a countrywide bid to prevent spread of the illness.

Government House leader Pablo Rodriguez said Wednesday the government will need to send a letter to the Speaker of the Commons, Anthony Rota, requesting that Parliament be recalled to deal with the emergency measures.

Once Rota accepts the request, Rodriguez said the Commons will be in session 48 hours later — but it will be a skeleton Commons.

Rodriguez is in discussions with his opposition counterparts to determine how to minimize the number of MPs who will actually return to debate and vote on the legislation, while maintaining each party's proportional share of seats.

Only 20 MPs are required for quorum in the 338-seat Commons. But Rodriguez said House leaders are looking at 25 to 30, preferably those who don't have to travel by plane to Ottawa.

Similar discussions are taking place among leaders of the various caucus groups in the Senate.

It was not certain Wednesday precisely when Parliament will be back or how quickly it can deal with the legislation. However, Rodriguez said the government is aiming to have Parliament back next week for what is expected to be a brief sitting.

Normally, the process of debating and voting on legislation can take weeks or months, including a requirement that it be sent to a Commons committee for detailed examination and testimony from expert witnesses. The same applies in the Senate.

However, with unanimous consent, both chambers of Parliament can agree to deal with all stages of the legislative process at once and move to a final vote immediately. They did that last week in order to quickly pass the new North American trade deal and a bill allowing money to continue flowing for government operations before adjourning.

Parliament to return to deal with emergency financial aid package

"We all saw how quickly the House and the Senate can react to the extraordinary situations by working together in the best interests of Canadians and the government intends to continue to be open, transparent and ensure as much information as possible with all MPs, with all senators," he said during a news conference.

"We're all united in this crisis. We will face it together."

Conservative House leader Candice Bergen said her party is prepared to come back to Ottawa to pass emergency legislation to help out Canadians impacted by COVID-19.

"We are working collaboratively with the government to recall Parliament next week," she said in a statement.

Bloc Quebecois Leader Yves-Francois Blanchet called the financial aid measures announced Wednesday "encouraging," although they might need to be adjusted or increased in the future. He said the government can count on the Bloc's co-operation to pass the legislation quickly.

House of Commons suspends for five weeks over COVID-19 risk