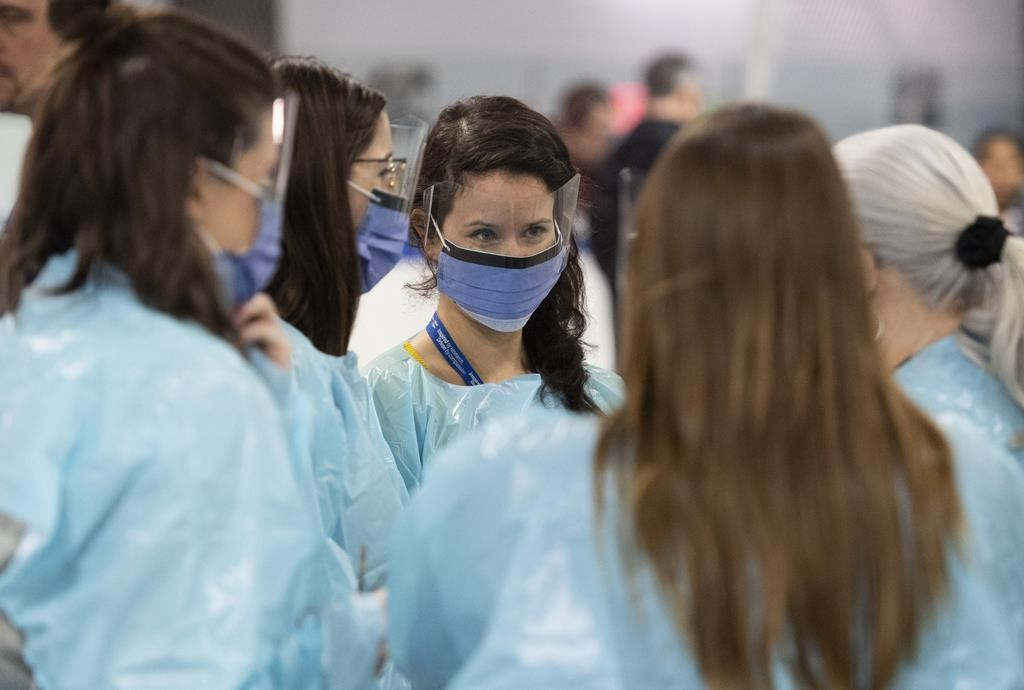 Medical staff prepare for the opening of the COVID-19 Assessment Centre at Brewer Park Arena in Ottawa, during a media tour on Friday, March 13, 2020. File photo by The Canadian Press/Justin Tang
Previous story
Next story

A southwestern Ontario city and a nearby county have joined hospitals and health-care associations in their call out to communities for face masks and other protective gear to help during the COVID-19 crisis.

The City of Windsor and the County of Essex are asking anyone with surplus N95 and surgical masks, along with gowns, nitrile gloves, battery-operated thermometers, hand sanitizer, wipes and respirators.

"We foresee a shortage and that's why we're acting now, because the folks at the hospital are indicating to us they've never been in this position before where they have supplies looking like they can run out," Windsor Mayor Drew Dilkens said.

He said the city will essentially become a distribution centre for supplies, which will go to hospitals, paramedics, police and others on the front line.

"We don't want to get to the point where it's a dire situation, we want to act on it before that point and that's exactly what we're doing now," Dilkens said.

The city is using its call centre to help organize the effort and city workers will be sent out to collect the gear, he said.

Dilkens called the situation critical, but not dire.

"The fact we're doing a community call for personal protective equipment should underscore the importance that everyone is hearing in terms of taking precautions against COVID-19," Dilkens said.

"Do not play fast and loose — take this very, very seriously, stay safe and stay well, and most importantly stay home."

A Toronto hospital is also accepting donations of face masks and other protective gear from members of the public in an effort to ward off an impending shortage.

The equipment drive at Michael Garron Hospital came a day after two Ontario medical associations sounded the alarm about the supply of N95 and surgical masks.

The N95 respirator masks are able to filter out tiny particles and surgical masks can help contain coughs. The east Toronto hospital is home to a dedicated COVID-19 assessment centre.

The Ontario Medical Association and the Registered Nurses' Association of Ontario said there is a large stockpile of the masks that have expired but should still be used in lower-risk areas.

The associations are also calling on anyone with masks not currently being used to hand them over so they can be used by health workers.

They specifically called on educational institutions and dental workers to repurpose their supplies.

The federal government has said it's secured millions more masks, which should be arriving shortly, but there's still concern that won't be enough.

Meanwhile, EllisDon, one of Canada's largest construction companies, began looking over the weekend for protective gear to donate.

The company is building an inventory of its extra masks and are up to about 100 thus far, said spokesman Dustin Luchka.

"Frankly, we will give whatever we possibly can," he said.