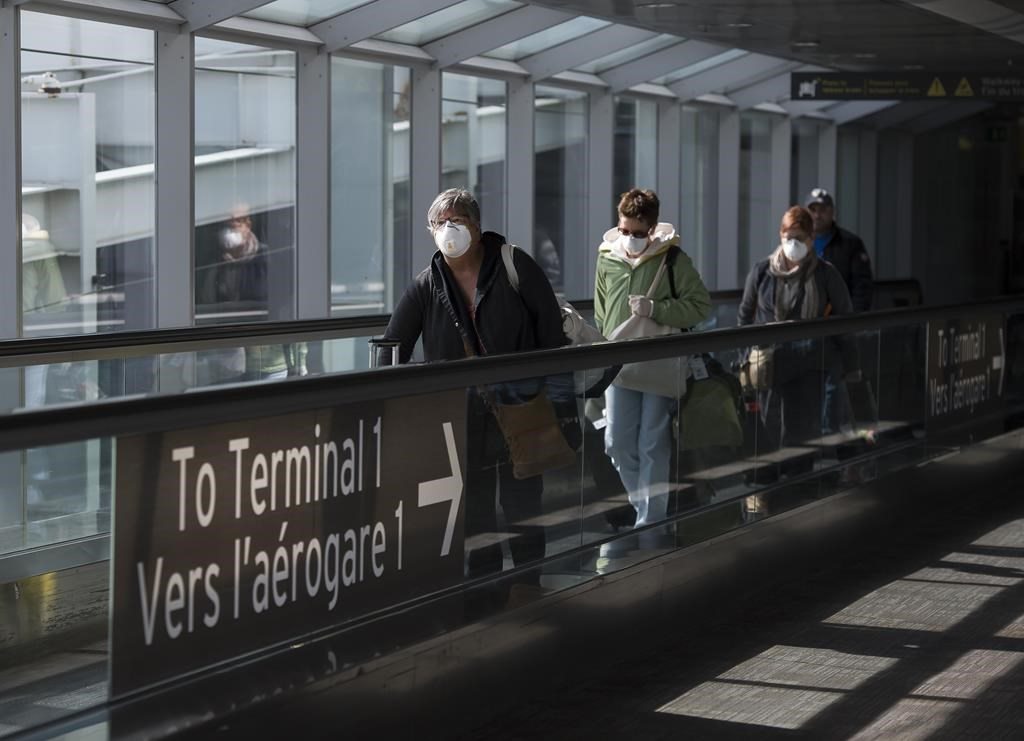 For one traveller returning to Toronto from Vietnam, the way officials handled arrivals to Canada was startling when compared to strict COVID-19 guidelines in the southeast Asian country.

Cameron Topp, who was in Vietnam to visit his wife's family, said officials at a mid-sized city airport there were checking the temperature of each traveller and handing out free face masks.

The Hamilton resident said most staff and travellers wore masks and were using hand sanitizer regularly throughout their flight.

But he described a stark difference in attitude as soon as he arrived at Pearson International Airport in Toronto on the weekend.

"When we got off the plane in Toronto it was shocking — it was like a whole different world, nobody seemed to care," said Topp.

"The staff that were there helping the elderly into wheelchairs, none of them had face masks on at all, it just looked like any other day."

He expressed concern about large crowds from various destinations mixing in customs areas, even after reports that people without symptoms may carry COVID-19.

Topp said he was also put off by the lack of direct explanation about how people should go about self-isolating for 14 days.

John Gradek, a lecturer at McGill University's School of Continuing Studies specializing in aviation management, was not surprised by Topp's account.

"It's a very, very difficult situation to manage. People are anxious to get home. So they want to get off the airplane and get out of the airport as quickly as they possibly can," said Gradek, who has held senior roles at Air Canada in operations, marketing and planning.

Officials have to manage that stress, sometimes bordering on panic, in an arrivals hall that is effectively now a Petri dish, he said.

"Are they doing what they should be doing? The answer is probably no."

The Greater Toronto Airports Authority says it is working closely with the Public Health Agency of Canada and Canada Border Services Agency to ensure that all proper measures are taken with international arrivals.

Officials said last week that anybody with symptoms of COVID-19 would not be allowed to board flights to Canada.

Any passenger who arrives at Toronto's main airport with symptoms is assessed by the public health agency, said Robin Smith, a spokeswoman for the airports authority. Based on the agency's recommendation, that passenger can be transported directly to hospital by paramedics.

To help manage the flow of arriving passengers, maintain physical-distancing requirements and reduce crowding, airport staff will sometimes hold an arriving flight on the tarmac or at the gate for a short period, Smith said.

The airport is also taking steps to stage passengers in queues to provide more space, she said.

"Signage has been installed throughout the airport and public announcements are made regularly to remind passengers to observe social-distancing standards," Smith said. "We put these measures in place to encourage and remind passengers to exercise their own ability to socially distance."

The border agency said additional teams of roving officers are now working throughout the arrivals and baggage areas at airports to engage with travellers.

These additional officers are visually observing arriving passengers and asking them how they are feeling to ensure they are aware of the guidance provided by the public health agency.

"CBSA officers will use their training to approach any traveller displaying signs of illness for further questioning," the border agency said.

Gradek emphasized the need to manage the flow of arriving passengers into airports, even if it means lengthy waits.

He said officials should hand out masks to all passengers arriving from abroad since people infected with COVID-19 might not display obvious symptoms. "They could be walking through the airport and communicating that virus to others."

Signage at airports generally is as bad as on public transport.
I keep hearing and reading government-produced documents lacking the specificity people need to understand what is actually meant. It's all delivered in low-level policy-speak: but you still have to know the score first, to know what they're talking about, not to mention have good ability to understand not only the language, but to hear it through the sound-distortion of public announcement systems. I've never experienced a public transit announcement that anyone understood.
But the worst of it, to me, is that governments should have been acquiring the emergency equipment they should have known would be needed.
Part of me wondered why they were ignoring the research out of China weeks and weeks ago, that made it clear that infected individuals are contagious both before and after symptoms subside, and when they are asymptomatic.
If I can locate and read the research, there's no excuse for health systems. It's not as though people didn't send to governments and some of those media experts links to published research, which may or may not have passed through their filters. Because their general experiential expertise trumpd anything they might not yet have learned?
They seem to have simply relied on WHO guidelines, woefully conservative and late to update.
Despite the research to the contrary, medical experts used by various media persist in ignoring even government-sponsored, and published research.
It's all been a matter of saving the hay after the horses have escaped through the open barn doors.
Then there was the "nurse expert" on CTV, demonstrating almost useless handwashing technique.
I share the traveller's shock and dismay. Much more could have been done, sooner, and had they exposed their messaging to even minimal feedback before delivering it, it would have had deeper penetration.
As it is, we are where we are, and the more people are exempted from current measures, the more people will die.
Which brings me to ask why pipeline construction and dam construction work isn't being halted. There are cases amongst the workers in each project, who've taken "the bug" home to their families. And that is *not* work essential to anything but certain companies' and investors short-term bottom lines. It just isn't.