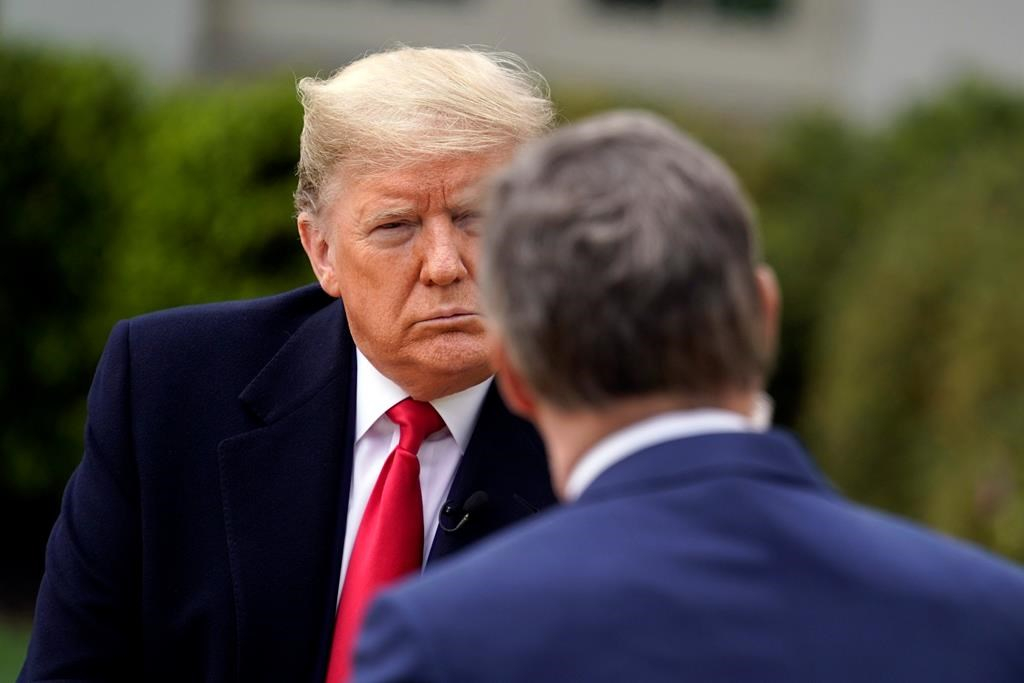 A chilling debate is unfolding in the virus-racked United States as President Donald Trump, desperate to reanimate his country's paralyzed economy, considers scaling back its COVID-19 defences and sending people back to work in a matter of weeks — just as the pandemic appears poised to erupt on American soil.

Meanwhile, from the other side of the world's longest undefended border, now stridently defended against vacationers and bargain-hunters, Canada watches, and waits.

Trump's thinking, which now seems bent on making the April 12 Easter weekend a celebratory victory party, is on a collision course with the best advice of public health experts, including the World Health Organization, which warned Tuesday that the U.S., with more than 50,000 active cases, could well be the outbreak's next major focal point.

"I'm hopeful to have Americans working again by that Easter, that beautiful Easter day," Trump told a briefing at the White House, before adding an important caveat: "Rest assured, every decision we make is grounded solely in the health, safety and well-being of our citizens."

It's a medical crisis, not a financial crisis, he added.

Trump's optimism, combined with an earnest effort on Capitol Hill by Democrats and Republicans alike to reach an agreement on a proposed $2-trillion U.S. stimulus package, cheered investors for the first time in weeks, adding more than 1,500 points to the Dow Jones index.

Graphs illustrating the spread of the virus, however, were going in the same direction: on Monday, there were more than 10,000 new cases in the U.S., with 140 deaths, while the global total was closing in on 400,000 cases.

In Ottawa, his own self-isolation period winding down without evidence of illness, Prime Minister Justin Trudeau clung to diplomatic language when asked about the disconnect between the state of the U.S. outbreak and the evolving messaging out of the White House.

Despite signs of accelerating pandemic, Trump wants Americans back to work

For now, the mutual ban on non-essential travel between the two countries will suffice to protect Canadians, Trudeau said. And Canada will continue to follow science-based advice, which means no end soon to the requirements of social distancing: stringent and frequent hand-washing, staying home, avoiding groups of people and steering two metres clear of everyone.

But the prime minister also made it clear that Canada is watching closely.

"We are braced for a broad range of scenarios," he said. "As the situation evolves, we will be ready to shift our posture with that."

In Ontario alone, 65 per cent of the province's 588 confirmed cases were infected through recent travel, and 29 per cent of those in the U.S., including New York, Colorado, California, Florida and Nevada, said Dr. Barbara Yaffe, the province's associate chief medical officer of health.

"With the influx of people coming back from the States, snowbirds and other people, it's something that we're watching," Yaffe said. "We're reiterating the advice we give to every international traveller returning, which is stay at home as much as you can. Self-quarantine for 14 days. Don't go out."

In New York, currently the largest viral hot zone in the U.S. with more than 25,000 active cases, Gov. Andrew Cuomo painted a bleak picture of the coming days and weeks, billing his state's worsening plight as a window into America's future.

The infection rate in New York has doubled in the last three days, said Cuomo, who urged the White House to keep working on finding a strategy that would resuscitate the U.S. economy without jeopardizing efforts to contain the outbreak.

"No American is going to say, 'Accelerate the economy at the cost of human life,'" he said. "Job 1 has to be save lives. That has to be the priority."

Trump, however, has a famously binary way of seeing the world.

If the U.S. had a better grasp of the nation's true health, including not only who is sick but who has recovered from the illness, it would be better able to control its response, Heyman said — isolating those known to be sick while reintegrating others back into the workforce and selectively reopening businesses.

But a chronic shortage of tests, now compounded by a hospital system that is already past capacity, has made that all but impossible.

"The challenge is, we don't have that information, and so we can't implement that very effectively right now," Heyman said. "When you lack information, I think you have to take the most conservative path."

Trump has never explicitly suggested otherwise. Indeed, his tweet Tuesday promised to watch over American seniors "protectively and lovingly." But some of his recent remarks — comparing the outbreak to flu season or the number of deaths on the country's highways, for instance — have prompted questions about whether he grasps the potential human toll.

"We have a very active flu season; more active than most. It's looking like it's heading to 50,000 or more deaths," he said Monday.

"And you look at automobile accidents, which are far greater than any numbers we're talking about. That doesn't mean we're going to tell everybody, 'No more driving of cars.' So we have to do things to get our country open."

Speaking from the Rose Garden, he made much the same argument Tuesday during a Fox News town hall as he promised to reassess the situation in two weeks.

"We'll assess at that time and we'll give it some more time if we need a little more time, but we need to open this country up," he said. "We have to go back to work, much sooner than people thought."

The Idiot in Chief has spoken

The Idiot in Chief has spoken. Prepare for the consequences.