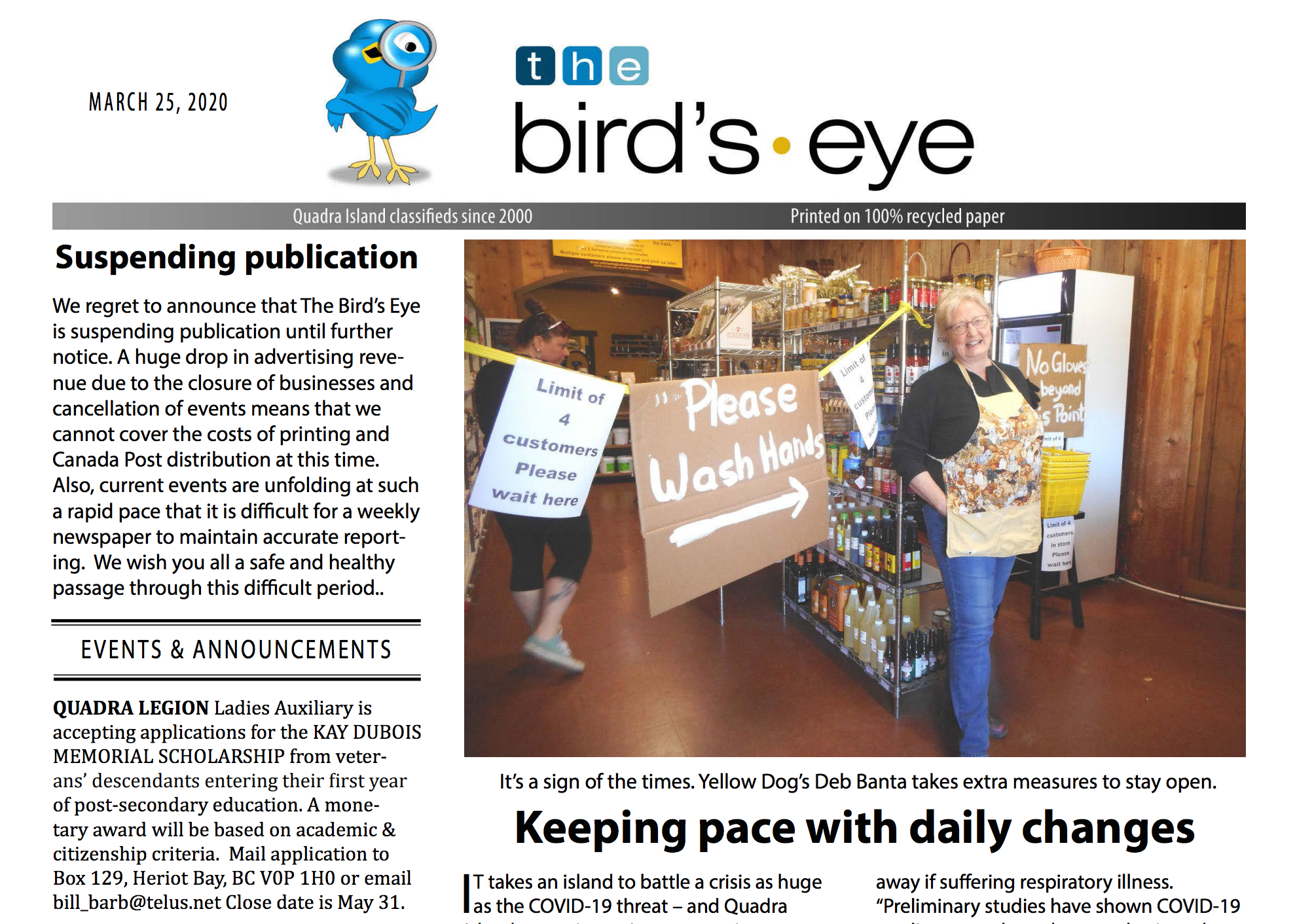 As a small island newspaper was dealt a deathblow by COVID-19 on Wednesday, Prime Minister Justin Trudeau announced financial aid for Canadian media, which the newspaper industry promptly decried as inadequate.

Quadra Island’s sole weekly paper announced its closure for the foreseeable future on its front page.

“We regret to announce that The Bird’s Eye is suspending publication until further notice,” it stated. “A huge drop in advertising revenue due to the closure of businesses and cancellation of events means that we cannot cover the costs of printing and Canada Post distribution at this time.”

The deluge of information the coronavirus pandemic unlocked also proved a tipping point.

“Also, current events are unfolding at such a rapid pace that it is difficult for a weekly newspaper to maintain accurate reporting. We wish you all a safe and healthy passage through this difficult period.”

The Bird’s Eye is a one-woman operation run by Amanda Smith, reporter, editor and publisher for the small periodical that serves Quadra Island – a community of fewer than 3,000 residents located off the east coast of Vancouver Island.

Smith and her note pad were a fixture at most community meetings or events on the island.

The six-page publication featured a mix of short, local news stories, community events, public service announcements and local advertising geared to islanders. The community was dismayed the virus had claimed yet another business.

“I’m heartbroken and almost close to tears. It’s yet another community paper closing, said Quadra resident Kathy Sales. “Having a local newspaper was something you could count on, and now there’s one less thing to give us a sense of normalcy.”

The island’s MLA and Transportation Minister Claire Trevena said she was saddened the paper was suspending publication. The economic impacts of COVID-19 are something virtually all island businesses are struggling with, she said.

“I’m heartbroken and almost close to tears," says Kathy Sales, as COVID-19 scuttles Quadra Island's weekly paper. "Having a local newspaper was something you could count on, and now there’s one less thing to give us a sense of normalcy.”

The same day the Bird’s Eye shuttered, and soon after community newspaper chains announced sweeping closures and cutbacks, Justin Trudeau offered help to the ailing media industry gasping under the strain of the pandemic.

“Right now, it’s more important than ever that Canadians have access to the latest news and information,” Trudeau said. “To ensure that journalists can continue to do this vital work, our government is announcing new measures to support them."

The government revealed spending on a $30-million coronavirus awareness advertising campaign across media platforms. It also said it would act on tax credits promised previously to newspapers.

The credit allows for qualified newspapers to claim up to 25 per cent of the wages or salaries paid to journalists or other eligible employees. The credit, not available to broadcasters, is retroactive to salaries paid starting on Jan. 1, 2019.

The announcement came the day after SaltWire Network, a newspaper chain in Atlantic Canada, announced it was laying off 40 per cent of its workforce and suspending all weekly publications for 12 weeks.

“Like many industries and businesses, the economic ripple effect of COVID-19 has hit our local newspaper media industry faster and far more aggressively than we could have ever planned for or anticipated, said Mark Lever, SaltWire President and CEO.

“With many of our advertising customers temporarily stopping operations, nearly two-thirds of our revenue has disappeared overnight. It is not an exaggeration to say if we continue with the same business model we have today there will not be a company to come back to once this crisis has passed.”

John Hinds, president and CEO of News Media Canada, said the measures announced by the federal government were not new, having been introduced in 2018 and outlined in the federal budget last year.

“We are really disappointed they didn’t announce anything new, yet pretended they did,” said Hinds. “It was very disingenuous.”

While the measures were good steps pre COVID-19, they didn’t address the steep crash in revenue COVID-19 was provoking in the newspaper industry, said Hinds, whose association represents print and digital news organizations across Canada.

“We lost 200 odd newspapers and news sites across the country in the past couple of years prior to COVID-19,” said Hinds, adding now ground for the sector was shifting daily. “We’re seeing the job losses starting and I expect that’s going to accelerate.”

The federal government needs to put some sort of backstop in place, he said.

“Most newspaper companies are strapped for cash and have no ability to weather this storm without an immediate cash infusion or access to credit, Hinds said.

“Obviously, this is so much more immediate for smaller papers,” he said. “The challenge is, it’s very difficult once you’ve stopped publishing, to start up again. You almost have to recapture your audience.”

“Will they be able to get back into business, or have they lost so much they’ll just have to shut down altogether.”

He valued the paper as a source of local news he could access without relying on Facebook.

“I think we all have to remember that lots of people don’t want to, or cannot, access information online,” Knutson.

Losing the Bird’s Eye is a setback for both Quadra and Cortes islands, said Roy Hales, editor of the Cortes Currents local online news site and Cortes Community Radio president.

“We need accurate news and [the Bird’s Eye] has been doing that for some years,” said Hales. “If you don’t have accurate news, you get rumours and speculation, and people start acting on false information.”

Cortes Radio has taken a huge financial hit with the coronavirus because its major fundraising activities have either been cancelled or unlikely to happen during the coming summer, Hales said.

“I don’t expect to see any of it,” said Hales. “I’d have to look into it, and the work to find out about it would fall on me, and I just don’t have the time.”

The irony is that during the pandemic people are turning to print and digital papers more than ever, Hinds said.

“In any other business if people were flocking to your product, you’d assume that was great news, it would be profitable and you’d be in a great place.”

Whether it be advertising or subscription based, there was no one revenue model that would act as a silver bullet for community papers, he said,

“I don’t have an answer, I have a lot of questions,” Hinds said. "There are tough decisions to make, and each publisher has to make decisions based on their market.”

Sales hoped her fellow Quadra residents and businesses would rally behind the paper, and the Bird’s Eye could resurrect itself once the coronavirus crisis abated.

“Once things get back to a new normal, I believe everybody will advertise again to help out the larger community,” she said.

Amanda Smith of the Bird’s Eye declined to comment to the National Observer.

Full disclosure: National Observer LJI reporter Rochelle Baker is a member of the board for Cortes Community Radio, a non-profit radio station on Cortes Island.