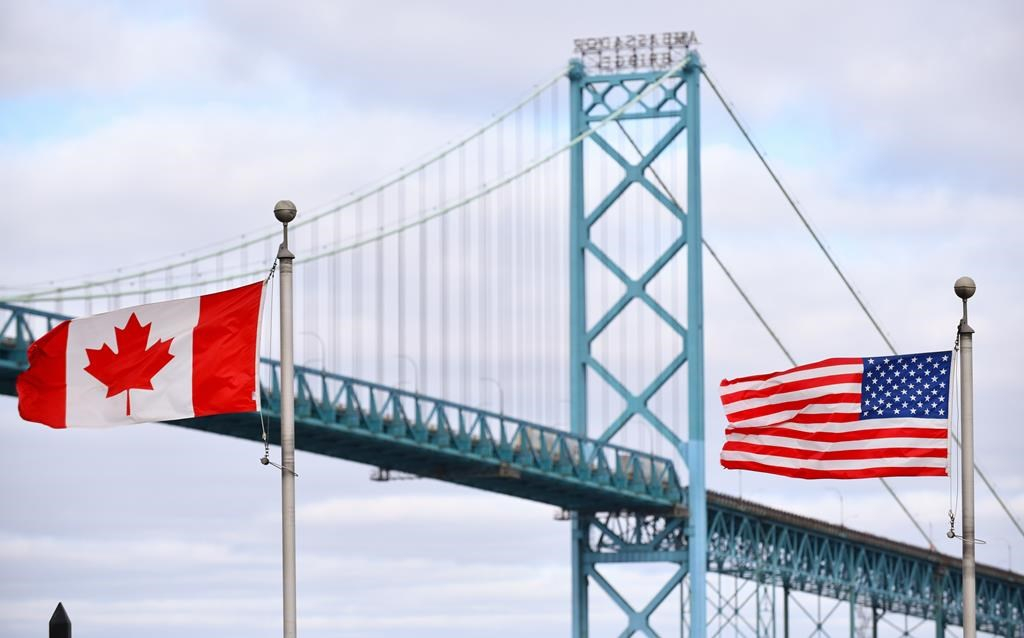 Canadian and American flags fly near the Ambassador Bridge at the Canada/USA border crossing in Windsor, Ont. on Saturday, March 21, 2020. File photo by The Canadian Press/Rob Gurdebeke
Previous story
Next story

Canadians who ignored the government's request to isolate at home after coming back from a trip abroad endangered the lives of others, Prime Minister Justin Trudeau said Thursday.

Trudeau, in his daily briefing to Canadians, said while many Canadians heeded the request, there were too many people who played fast and loose with the rules, and because of them, the government had no choice but to turn what had been a request into an order.

"If you've just returned from abroad, you have to go home and stay home for 14 days," Trudeau said. "But some people have not been taking this seriously. They're stopping by the grocery store on their way home from the airport. They're getting together with friends after being away for March break. This kind of conduct is not just disappointing, it's dangerous."

Outbreaks of the novel coronavirus are much more widespread in other parts of the world, including the United States, Europe and parts of Asia. This raises the risk that people returning to Canada from a trip were exposed to the virus and more likely to spread the illness to others after arriving home.

Newfoundland and Labrador is proof of how one person can have a significant impact on the caseload. That province reported 44 people with COVID-19 were linked to a single individual who attended a visitation at a funeral home after returning from a foreign trip. That man returned before Newfoundland issued its own order to enforce quarantine for people arriving in the province but had been asked to self-isolate voluntarily.

Cabinet passed an order Tuesday to use the powers under the Quarantine Act to require people arriving in Canada by land, air or sea, to self-isolate for 14 days. Defying the order could result in fines of up to $1 million or three years in prison.

Enforcing the order is a work in progress and will be updated or changed if circumstances require it, said Dr. Theresa Tam, Canada's chief public health officer. It will start with random checks for people allowed to quarantine at home, including phone calls from federal and local public health officials. Police can and will be called on to help if someone is found to be violating the quarantine order, said Tam.

"That hopefully will not happen very frequently," she said.

"That is what we are looking for. But under the Quarantine Act we can engage, potentially, peace officers if needed but again, this is more, this is a deterrent, if you like, a serious reminder of how absolutely important it is to undergo self-isolation."

Canada Border Services Agency agents will be the first line of enforcement, screening arrivals for symptoms of COVID-19 and issuing orders to all of them depending on their health status.

Trudeau says refusing to self-isolate after travelling is 'dangerous'

Travellers must report any signs of a cough or fever to the border guards, and people with symptoms will be treated slightly differently than people without, said Tam.

A traveller with COVID-19 symptoms who needs medical care will be immediately taken to hospital and quarantined there, while those with mild symptoms will be allowed to go home if they can get there directly in their own car with no further public contact. Those who can't do that or who live with vulnerable people, such as seniors or people with compromised immune systems, will be taken to federal quarantine sites.

All travellers who have no symptoms will be ordered to go home immediately and stay there for 14 days. That includes air travellers who must take a connecting flight. They will be told to monitor for symptoms and given a face mask to use if symptoms appear.

Once at home, the rules are relatively simple. Stay there. Do not go get groceries, don't fill up the car with gas, don't run to the pharmacy or the drive-through. If you need food or medicine, ask a friend to deliver it to your doorstep. Dr. Howard Njoo, Canada's deputy chief public health officer, said Thursday if you have a backyard you can go outside, but do not go outside where any member of the public is.

The quarantine order will be lifted 14 days after the date of arrival back in Canada.

Canada has been gradually raising its isolation requests since the COVID-19 outbreak began in China's Hubei province in January, starting with arrivals from Hubei in early February, extending it to Iran and Italy in early March, and then to every arrival on March 15. Until now it was a request. Now it is an order.

It's the government's own

It's the government's own darned fault. To most people, a "request" is something that is subject to choice. To most people, a "guideline" is a recommendation, not a demand.
They need to stop speaking in cryptic tongues, and start speaking in the language people understand.
On top of taking the recent science into account, and erring on the side of likely better health outcomes, not on the side of miserly deployment of medical resources.