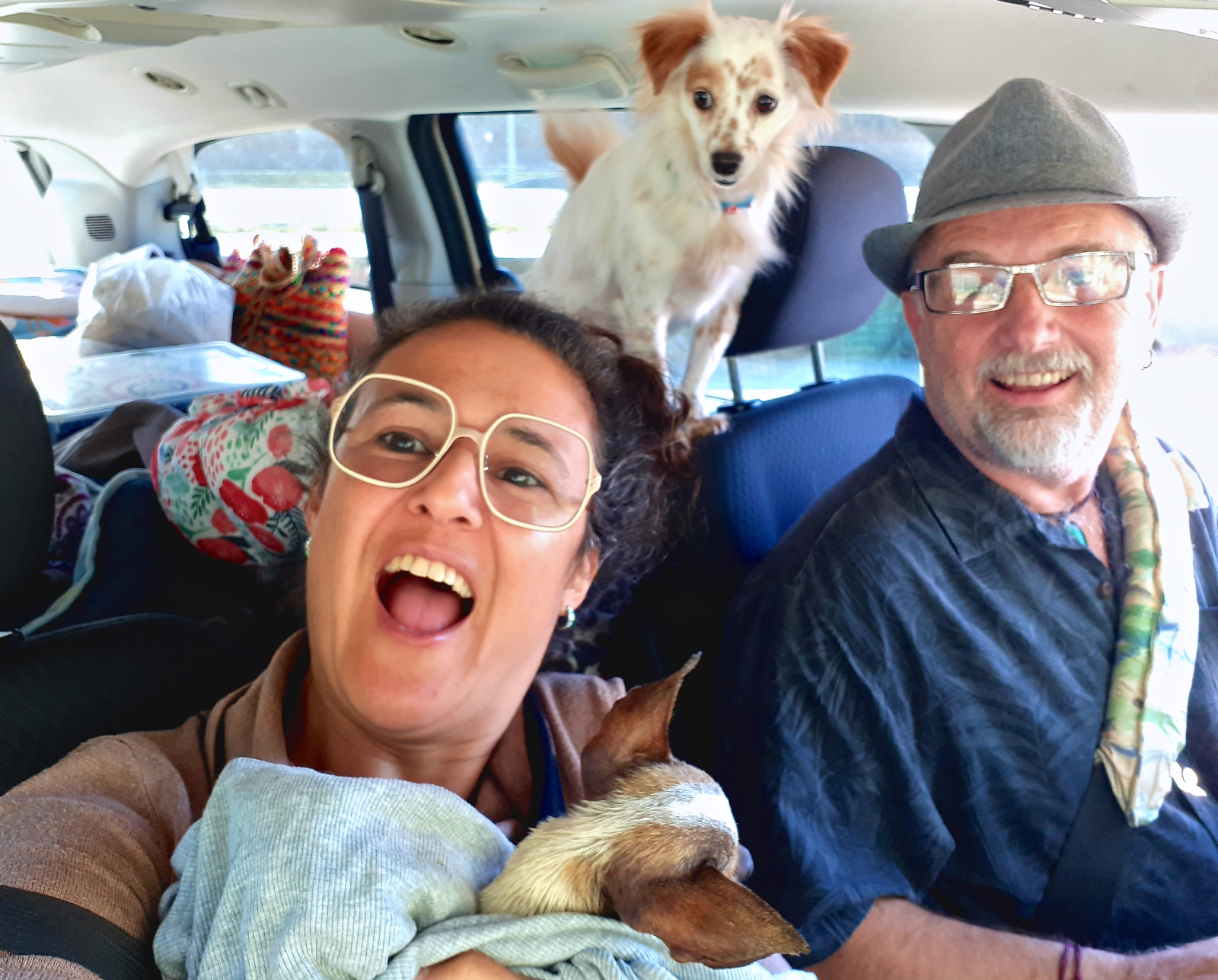 Susana Vijaya and Lyle Brulhart, along with their their rescue dogs, are jubilant to get back to Canada just prior to COVID-19 border restrictions after a stressful, surreal journey through the U.S. from Mexico. Photo: courtesy of Susana Vijaya
Previous story
Next story

Susana Vijaya’s reaction after a tense, overland race across the U.S. to get to the Canadian border before it slammed shut says it all.

Vijaya and partner Lyle Brulhart, and their rescue dogs Zoey, Valentiny and Perula, had made a mad dash up the U.S. West Coast after leaving Mexico six days earlier.

The couple, snowbirds that wintered in La Manzanilla, had been blissfully unaware about the nature of the COVID-19 crisis in the U.S. and Canada when they started their journey north.

“We were still in la la land,” said Vijaya, adding there was no real state of alarm in Mexico and no COVID-19 measures in place when they set out.

“We were not afraid, or aware, of how things were in the U.S., or here in Canada.”

They got their first inkling North America was on its way to lockdown when they arrived at the U.S. border on March 18.

The roads from Nogales, Mexico, to the U.S border at Arizona were eerily empty, and the couple had the easiest border crossing they’d ever experienced.

“We entered the building and it was almost empty,” said Vijaya, noting that the U.S. border officers were jovial and telling jokes.

But, as soon as they crossed into Arizona, things got serious.

“We started stopping in stores and started realizing there were no supplies anywhere,” Vijaya said.

Sanitary items such as gloves, masks and alcohol were non-existent.

By the time they arrived in Phoenix that same evening, they were outright scared.

All the restaurants, pubs, casinos, stores and public venues in the state’s capital city of 1.6 million were shut down. The only food to be found was sandwiches at a gas station.

“That night we couldn’t find a bathroom open anywhere,” said Vijaya. “From that day on, we drove as fast as we could.”

The couple was glued to news on the radio for the next two days. They avoided all contact with cities along the highways north.

They knew Canada and the U.S. were going to close the borders, and Vijaya in particular was fearful she might not get back into Canada.

She had confirmation of her permanent residency from the Canadian government, but she was obliged to have it validated at the border, and she’d been told immigration services were no longer available.

“I knew there was a risk [the validation] might not happen, and I was scared I’d be trapped outside Canada.”

But when she got to the border, officers let her cross with no delays.

“They apologized that immigration wasn’t able to give me those services at the border,” Vijaya said. “Oh my God, I cried.”

Vijaya and Brulhart were some of the thousands of travellers struggling to return to Canada after Prime Minister Justin Trudeau issued a call for citizens to come home or risk getting trapped abroad.

More than a million Canadians or permanent residents returned home between March 14, when Global Affairs Canada issued its advisory, and March 20, when the border with the U.S closed to non-essential travel, according to the Canada Border Services Agency.

Quadra resident Kent Macaulay flew back to Canada, cutting his trip to New York short, as COVID-19 began to ravage the city and state. He decided to go home March 10, prior to the Canadian advisory, as the COVID-19 crisis began to unfold in the U.S.

All public schools and numerous universities in the state had shut down the day before, and the city of New Rochelle, in the suburbs of New York City, was in full lockdown after a cluster of COVID-19 cases cropped up.

“Things had really begun to ramp up on the East Coast of the U.S., so I made a quick decision to book a flight back that night,” said Macaulay, who was on alert for signs he should head home.

He was in New York to salvage what meetings he could as a representative Servas International, a non-profit dedicated to peace through travel, after the conference for the UN Commission on the Status of Women he was slated to attend was cancelled.

During his trip home, Macaulay didn’t see any signs of the pandemonium that would ensue at airports a week later, as countries around the globe began restricting flights as a response to novel coronavirus.

The U.S. has 140,904 confirmed cases of COVID-19 and 2,405 deaths as Monday, according to U.S. Centers of Disease Control and Prevention (CDC). Residents of New York, New Jersey, and Connecticut should refrain from non-essential domestic travel for 14 days effective immediately to stem transmission of the massive outbreaks in the region, the health agency stated Saturday.

When Macaulay travelled, he wasn’t worried about getting home.

“It wasn’t so much I thought I might get trapped,” he said. “It was rather, I don’t want to contract this virus. The last thing I wanted was to bring it back to Quadra.”

As a result, Macaulay went straight into self-isolation when he got home. “At that time there was no talk about it being mandatory, it was just good practice at the time and seemed a wise thing to do.”

Vijaya was perfectly happy to go into mandated self-isolation after her trip home, which she described as stressful, humbling, exhausting and surreal.

“I’m really enjoying this peacefulness,” she said.“At the same we’re doing our part…I’m not afraid of the virus for me, but I don’t want to be responsible for anybody’s death, so we’re taking all precautions.”

To hear more on Susana Vijaya's journey home listen to her podcast at Cortes Community Radio.