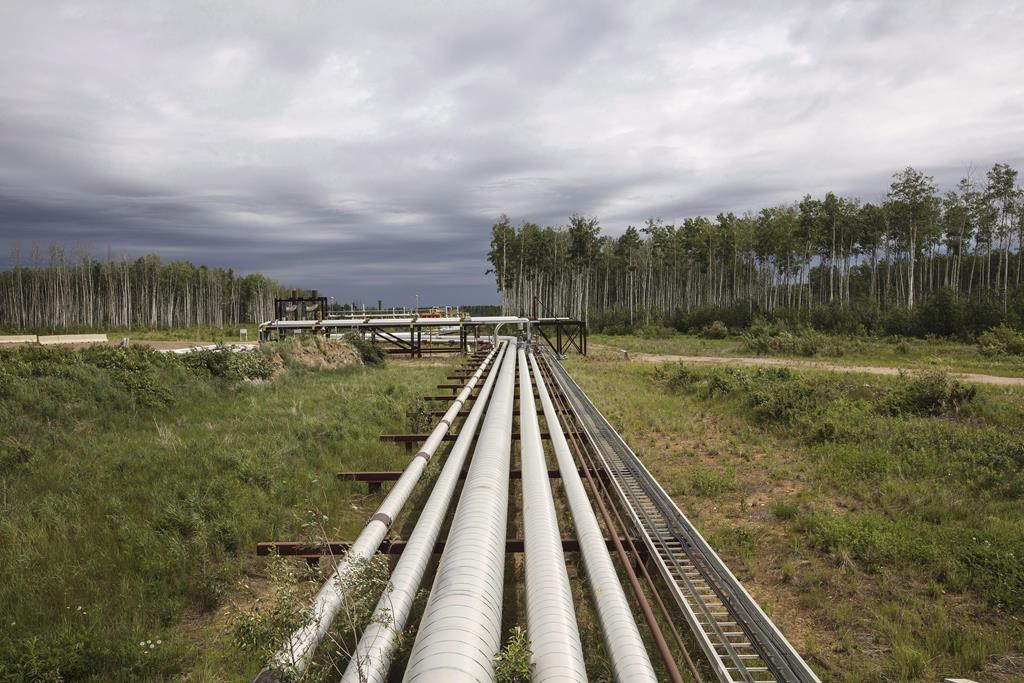 Suncor pipes that carry various liquids from their MacKay River pad in the oil sands in Fort McMurray Alta, on Monday, June 12, 2017. File photo by The Canadian Press/Jason Franson
Previous story
Next story

But a report from consultancy Wood Mackenzie says that won't likely slow the overall investment in renewables — fossil fuel players really weren't putting much money into it anyway.

"In a US$60 per barrel oil price environment, most companies were generating strong cash flow and could afford to think about carbon mitigation strategies," said Valentina Kretzschmar, vice-president, corporate analysis, at Wood Mackenzie.

"But now ... all discretionary spend will be under review — that includes additional budget allocated for carbon mitigation. And companies that haven't yet engaged in carbon reduction strategies are likely to put the issue on the back burner."

Earlier this week, Calgary-based oilsands giant Suncor Energy Inc. announced it would cut its 2020 capital budget by 26 per cent or $1.5 billion in response to lower global oil prices linked to a price war between Saudi Arabia and Russia.

Two previously approved projects were put on hold for as much as two years: A $1.4-billion plan to install two cogeneration units at its Oil Sands Base Plant in northern Alberta that would have reduced greenhouse gas emissions, as well as a $300-million wind power plant in southern Alberta.

But the company insists it still intends to meet its environmental targets.

"We're committed to our 2030 goal to reduce the GHG intensity of our operations by 30 per cent," said Suncor spokeswoman Erin Rees. "Commissioning of the cogen was originally slated for 2023."

Fellow oilsands producer Cenovus Energy Inc. has cut its capital spending plan for 2020 by 32 per cent and, although the details haven't all been worked out, spokeswoman Sonja Franklin said it remains committed to its target of net zero GHG emissions by 2050 and a 30 per cent reduction in carbon intensity per barrel by 2030.

Choosing fossil fuel investments over renewables is like Kodak investing in film after inventing the digital camera in the 1970s, said Greenpeace Canada campaigner Keith Stewart.

"The current oil price crash is a preview of what will play out in the coming years, as electric vehicles coupled with cheap solar and wind power do to oil demand what digital cameras did to the market for film," he said.

"If oil companies can't evolve to deal with investors increasingly concerned about climate risk, then we should make sure they don't take their workers and communities down with them."

On Wednesday, Spanish energy giant Repsol, which produces some of its oil and gas in Canada, said it would cut its 2020 capital budget by more than one billion euros (about C$1.55 billion), but would still maintain its target to reduce its carbon intensity for 2020 by three per cent compared to 2016.

It vowed to significantly increase its renewable power generation capacity and to reduce carbon dioxide emissions across all its businesses.

"With these measures, amidst the current extraordinary conditions, Repsol ensures the robustness of its balance sheet in the short term while it continues to pursue its goal to achieve net zero carbon emissions in 2050," it said in a statement.

In its report, Wood Mackenzie notes that the five European oil and gas majors have committed to spend just over US$5 billion per year between them on zero carbon technologies in the near term, about nine per cent of their pre-crisis upstream development budget out to 2022.

But it notes the total renewable energy portfolio by the group, including those most focused on diversifying into renewables such as Repsol and Portugal's Galp, is about 7.4 gigawatts of operational renewable capacity (a gigawatt is enough to power roughly 700,000 homes).

By comparison, Iberdrola, one of the world's largest renewable power asset owners, has almost five times that capacity (32 GW, including hydro) and added almost three GW during 2019, it said.

Installations of both wind and solar continued to increase through the last oil price downturn, Wood Mackenzie’s analysis shows, because most investment comes from outside the oil and gas sector.

It adds that oil prices that average around US$35 per barrel reduce the returns from new oil and gas projects to a level where renewable investments can compete on an economically level playing field.

"Capital allocation is no longer a one-way street for Big Oil. Renewables projects suddenly look as attractive as upstream projects at US$35 per barrel."

if $35 / barrel levels the field, what does $5 a barrel say?
If no investment in renewables results, it shows that there is actually massive obstruction to moving to renewables in the face of so-called "economic wisdom" that corporations like to claim.
It shows they are full of shit actually when they claim to be acting wisely according to economics and actually just wholly committed to fossil forever or until you die.

Nationalise big oil, obviously, if the current structure continues to insist in racing us all toward the cliff edge. What do these idiots think they'll do with their worthless petrodollars? Build papier-mâché fortresses to keep the raging pitchfork-weilding throngs at bay? It's over. Get over it!