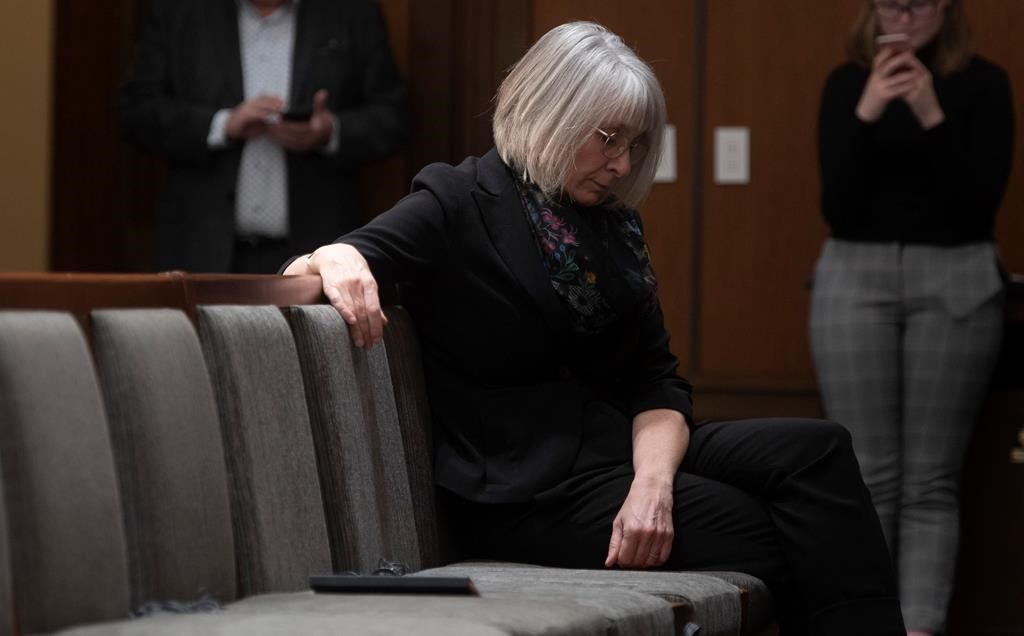 Minister of Health Patty Hajdu sits in the front row of seats instead of onstage to ensure spacing between speakers during a news conference in Ottawa, on Monday, March 30, 2020. File photo by The Canadian Press/Adrian Wyld
Previous story
Next story

The federal government likely did not have enough protective equipment in its emergency stockpile to meet needs during the COVID-19 pandemic, Health Minister Patty Hajdu acknowledges.

Federal officials are now working hard to procure scarce equipment such as surgical masks at a time when governments everywhere are scrambling to do the same, she said.

"We likely did not have enough. I think federal governments for decades have been underfunding things like public-health preparedness, and I would say that obviously governments all across the world are in the same exact situation," Hajdu said.

"It is an extremely competitive space right now for personal protective equipment. We are pulling out all of the stops ... trying to procure equipment in a global situation where equipment is extremely tight."

Hajdu also signalled there are lessons to be acted on after the pandemic.

"This is an opportunity for all governments to consider reinvesting in public health and preparedness, and I look forward to those conversations on the other end of this."

Canada's National Emergency Strategic Stockpile has supplies that provinces and territories can request in emergencies, such as infectious disease outbreaks and natural disasters, when their own resources fall short.

The stockpile's roots can be traced to the early 1950s, an element of the federal government's Cold War civil-defence plan.

The emergency stockpile is in a central depot in the national-capital region and warehouses strategically located across Canada.

The Public Health Agency of Canada is responsible for maintaining the stockpile, continuously assessing its contents and refurbishing the supplies.

The government says the agency has released items from the strategic stockpile in support of provincial and territorial COVID-19 response efforts.

This has included personal protective equipment such as surgical masks, gloves and N95 respirators, as well as other items including disinfectant and hand sanitizer.

The government says it is working to enhance its stock of supplies to support provincial requests or those from other federal partners who may also be in need of equipment.

Hajdu's admission that the national emergency stockpile may have been inadequate for the current crisis is important "to ensure that we learn immediate lessons" and do not mislead Canadians about the extent of the supply problem, said Wesley Wark, a visiting professor at the University of Ottawa's Graduate School of Public and International Affairs.

The strategic stockpile was designed to ensure a surge capacity to meet a health crisis and to provide a stop-gap, buying time for other sources and new manufacturing capability to come online.

But it appears the stockpile has failed in that mission due to underfunding, lack of attention or poor inventory, he said. "Now we are racing against the clock."

Provincial and territorial governments and hospitals throughout the country need to know the extent to which they can count on the national stockpile for emergency assistance, Wark said.

"Transparency is vital. Knee-jerk secrecy has to be discarded."

Trudeau says Chinese masks will be checked for quality standards

How has Dr Theresa Tam's

How has Dr Theresa Tam's resume prepared her for her specific role?

We weren't prepared for this?

Five and a half years in,

Five and a half years in, there's no room to complain about decades.
Whose job was it? And why wasn't it done? Up until perhaps early January, there might have been the lame excuse of "we didn't know." But after that, there is no excuse.
Whose job was it?