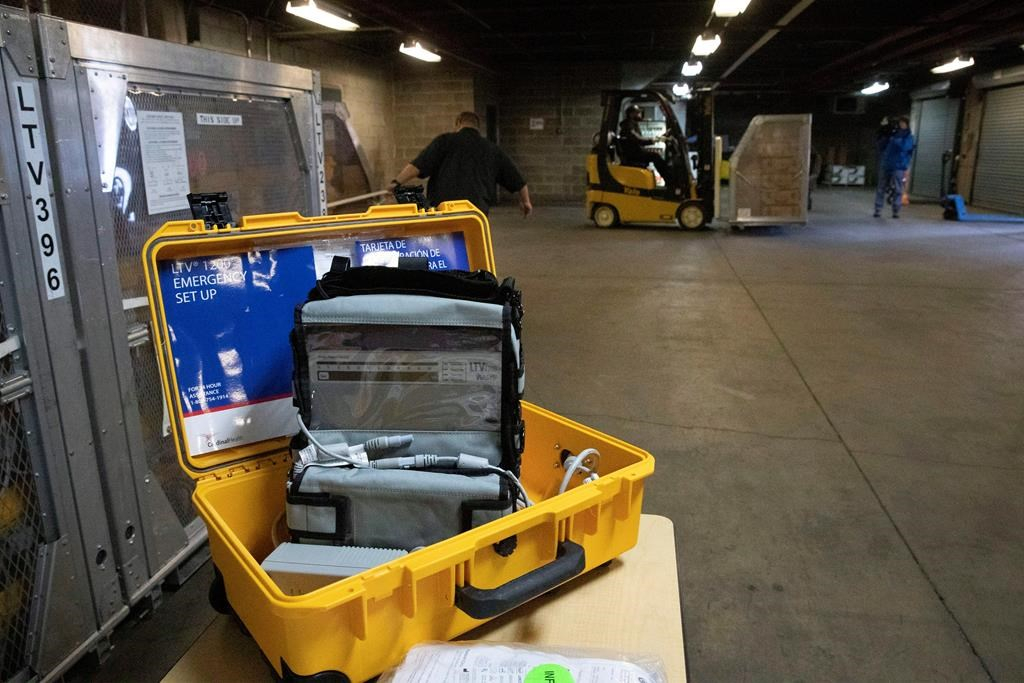 A ventilator is displayed during a news conference, on Tuesday, March 24, 2020 at the New York City Emergency Management Warehouse, where 400 ventilators have arrived and will be distributed. File photo by The Associated Press/Mark Lennihan
Previous story
Next story

When there's only one ventilator but two patients who need it, how should a doctor decide who gets the chance to survive?

Medical ethicists across the country are working to help frontline workers answer weighty questions should the COVID-19 pandemic overwhelm hospitals the way it has in northern Italy and New York City.

"These are not decisions we want to make," said Dr. Timothy Christie, who convenes an ethics committee that gives advice on pandemic response policy in New Brunswick.

"The planning that people are doing right now, they're doing the best to make it so we don't end up there."

On Wednesday, chief public health officer Dr. Theresa Tam warned that Canada's health-care system could be deluged in each of Ottawa's pandemic scenarios. The system is not designed to deal with a surge of COVID-19 cases, which could mean facing difficult decisions about how to allocate sparse resources, she said.

Since the novel coronavirus was first confirmed in Canada, officials in several provinces have been developing guides so that doctors don't feel alone in making life and death decisions.

British Columbia's ethical framework builds on work started during the H1N1 epidemic and Ebola crisis. It addresses specific ethical questions on everything from distributing personal protective equipment and ventilators to "decision making about who will get scarce treatment if that comes to pass," Dr. Bonnie Henry, the provincial health officer, said last week.

"No single individual physician or clinician will have to make that decision on their own."

In Ontario, officials have announced the formation of an "ethics table" led by the University of Toronto's joint centre for bioethics.

Alberta is working on a framework too.

"The focus will be on ensuring as many patients as possible receive the care they need," Tom McMillan, a spokesman with Alberta Health, said in an email.

In New Brunswick, clinicians will be given a principle to help them make decisions based on their expertise.

Christie's committee is recommending a fundamental shift in the underlying principle that doctors use to make treatment decisions if there aren't enough hospital beds and ventilators.

"In cases where resources are limited, we would allocate the resources to people for whom we think will have the best outcome," said Christie, who is also regional director of ethics services for the Horizon Health Network, the province's anglophone health authority.

"That's fundamentally different than the way we'd do it in normal circumstances."

Under normal circumstances, Christie said doctors ask patients what their goals are. A patient with terminal cancer might wish to spend one last Christmas with his family, and treatment plans can be adjusted to help reach that goal.

COVID-19 could create a scenario where using a ventilator to keep someone alive for an extra few months comes at the expense of another person's life, he said.

The challenge is determining how you define outcomes when comparing patients.

"There's a lot of debate about how you define the best outcome. Some people would say it's the amount of life you could live," Christie said. In other words, choosing to save the younger of two patients.

"We reject that approach," Christie said.

A 20-year-old and a 55-year-old both have "significant" amounts of life left, so the difference between them is not morally relevant, he said.

Age isn't the only factor being debated by the New Brunswick committee as it considers how to avoid discriminating against someone who develops COVID-19 after all ventilators are already in use.

Rather than stockpiling ventilators in anticipation of future cases, Christie said they are advising that a new patient be assessed against those already being ventilated. If the new patient has a good chance of surviving, doctors could ethically end the treatment for another patient who isn't responding, he said.

But an ethical framework won't help doctors who have to decide between two patients with nearly identical outcomes.

Could ethically "end treatment" of one, to give it to another?
Nope. There's case law in Ontario that says that ceasing treatment *is* treatment, and must be consented to.
There is absolutely no justification for deciding that everyone belongs to a "class" based upon age alone ... plenty of 20-somethings will be dead within 35 years, while many 60 year olds will be alive at the end of the same time-frame, all things being equal.
Which begs the question as to why 25 vs 55 is even a question, given the propensity of 25yos to engage in risky behaviour that is not generally part of 55 yo behaviour.
However you cut it, with age as the definator, seniors will be discriminated against who take no regular meds (unless you count vitamins), have none of the chronic comorbidities mentioned in research stats, haven't been a smoker or drinker, have always been active (though seldom engaged in gym-going, jogging, or calisthenics), and have not been overweight in decades if at all.
I know such people, who contribute more to their community than most, and who hold personal "I was there" history in their bones, and so a source of wisdom just not available to younger ones.
"Years left" measured by calendar only is ridiculous. It's no measure of likely lifespan.