What's streaming to keep you entertained in time of COVID-19 social distancing?

By Volkmar Richter | Reviews, Entertainment | April 3rd 2020
#211 of 1456 articles from the Special Report: Coronavirus in Canada 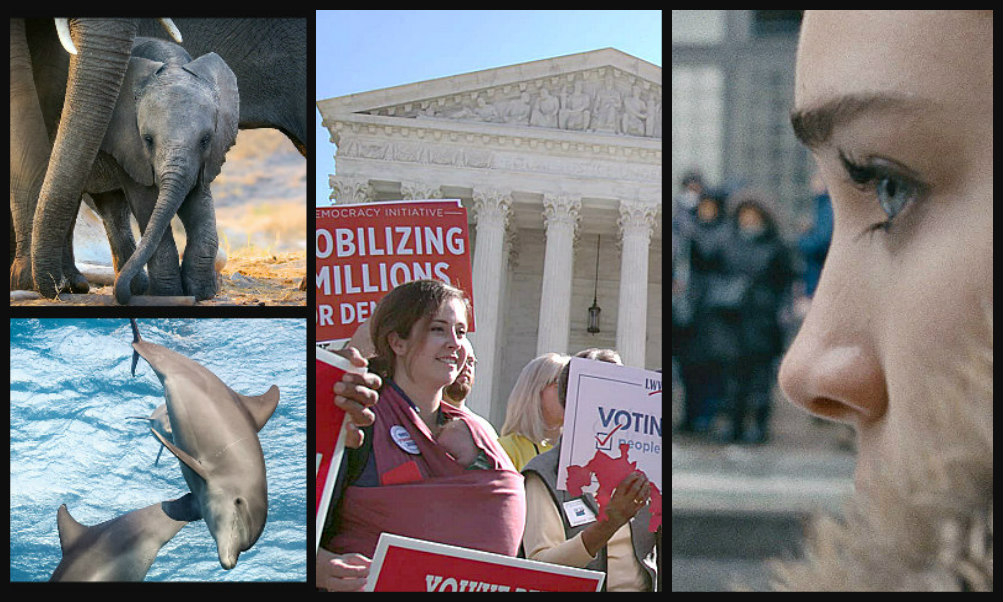 Another week to get your movies by streaming. Some very recent releases have been rushed out, like Onward (at Disney+) and Portrait of a Lady on Fire, one of the best from last year. Several that were to open in theatres today are now streaming, too. I'll cover several of those, including …

James vs. His Future Self: 2½ stars

ELEPHANT: This is the most enthralling of these annual Disney wildlife documentaries that I’ve seen. As usual, there is sentimentality and a cutesy story, but there are also spectacularly beautiful images and a couple of extremely scary sequences. And best of all, a lot to learn. It’s good for kids, though I’d be careful with the very young. Oh, and there’s even a fart joke.

“Family is everything,” says the narrator, Meghan Markle, the Duchess of Sussex, who was briefly a B.C. resident. It’s a bearable statement because it’s based on observation. But there are other lines that are just too anthropomorphic to feel real, like “Time for a pool party.” And how do the filmmakers know what elephants dream about when they sleep?

The central character is a one-year-old named Jomo, who is playful, easily distracted, and — by the end of the film — must learn the ancient ways of his species. He gets that from his mom and her sister, the matriarch, who leads the herd on a 1,000-mile trek. The route takes them from a delta that dries up annually in Botswana to Victoria Falls, with its plentiful water. Along the way, and back, they trudge through a long salt pan, through windstorms, awfully close to crocodiles and hyenas, and — in a most tense sequence — through an attack by lions. There’s high drama and danger (as when a baby elephant has to be rescued from a mud pit) and impossible pictures (like swimming elephants photographed from below in the water). Markle’s reading of a rather stiff script can’t match the majesty of those visuals. (Disney+) 3½ out of 5

DOLPHIN REEF: This one follows the same story arc as Elephant. There's a playful child that has to learn to grow up, a family group that has to live within the particular rules of its environment, and an attack by predators. There's even more dazzling colour than usual because this family lives on a coral reef among a sparkling array of plants and creatures. It's "like one big carnival," according to narrator Natalie Portman. They're Pacific bottlenose dolphins, the child is named Echo, and those are orcas that come attacking. Also, sharks and cuttlefish.

Echo gets lost at one point, wastes his time playing with a shell at another, and ultimately has to learn a lot, especially about co-operation. Dolphins make allies of humpback whales. Every creature on the reef has to contribute to keep it alive and healthy. Parrotfish, for instance, keep it clean, gardener fish eat the excess plants. Sometimes we get a swirling mass of fish; other times a slow-motion ballet, in crisp and beautiful underwater cinematography. There's high tension when Echo wanders off and is alone in the dark. That's when the sharks prowl. The highlight, though, is an amazing fishing scene. The dolphins get the fish to leap out of the water and literally catch them out of the air. Again, enlightening; though I would have liked more about the workings of the reef and the threats it faces. (Disney+) 3 out of 5

SLAY THE DRAGON: The Canadian distributor figures this powerful documentary wouldn’t be of much interest here because it is so American. Have they never heard of the long "Gracie’s finger" controversy here in Vancouver? Or how many of us wonder how in the American system politicians can get fewer votes than their opponents and still win an election? One answer is gerrymandering, an old tactic named after a state governor back in the 1800s and used spectacularly just 10 years ago. Redraw the voting districts, “pack” your opponents’ supporters in just a few, and ensure your own voters are the majority in most, and you win. Modern data mining makes it easier than ever to identify those people.

A Republican strategist named Chris Jankowski pushed it, through his Project Red Map, as a response to Barack Obama’s election. He’s in the film talking proudly about how cheap and effective it was in key states. Businessmen like the Koch brothers and a lobby group, the American Legislative Exchange Council, supported it and the new maps were drawn in lawyers’ offices. “An assault on democracy,” says a Mother Jones reporter. “A fixed system,” says Arnold Schwarzenegger.

Anti-union laws and the Flint, Mich., water crisis resulted from it and that spurred Katie Fahey to post a message on Facebook that has led to a movement, two U.S. Supreme Court hearings (Brett Kavanaugh, key in the second) and court action on the state level. The aim is to have an independent commission, not the party in power, redraw the voting maps. It’s particularly relevant right now because that’s done after every census. April 1 was census day. The film isn’t completely balanced. It has a point of view, but it is fair and super informative. (Available for rent at Apple TV iTunes) 4 out of 5

NEVER RARELY SOMETIMES ALWAYS: Abortion is the subject, but this film is much wider than that. Women’s rights. A girl feeling misunderstood. Sometimes abused. Searching for help. They all emerge and peak with almost harrowing intensity as a 17-year-old small town Pennsylvania girl discovers she is pregnant and tries to do something about it. The film runs with almost documentary precision through the whole process. There’s her first retching in the bathroom, her try at inducing a miscarriage, getting no help (only a pro-life video) at the local women’s centre, and then taking a bus ride to New York.

Her name is Autumn and she’s played with absolute credibility by Sidney Flanigan. Her cousin and co-worker at the supermarket (Talia Ryder) goes along with her for support and also attracts the attention of a young man (Théodore Pellerin), who may or may not be helpful. The film keeps us on edge about everything, especially at the abortion clinic, where Autumn undergoes a two-part procedure. Before that, there are questions about her sexual history. The title has all the possible answers for each. There’s the cost to talk about. She doesn’t have the money for it or even a place to sleep between appointments. We’re right there for the prep and then the operation. Nothing graphic, but chilling anyway. Director Eliza Hittman has created a powerful, non-judgmental film and has drawn amazing performances out of her actors to depict a very real and urgent situation. She has won awards at Sundance and in Berlin for it. (Video on-demand services) 4½ out of 5

JAMES VS. HIS FUTURE SELF: This is a friendly, undemanding comedy but with an extra: Some added thoughts about time travel. It’s not worth it; you’ll be stuck in time and that’s boring. “You don’t want that life,” a young theoretical physicist on the verge of a breakthrough (Jonas Chernick) hears from his own self (Daniel Stern), who has come back from the future to warn against pursuing his “super-dooper important science stuff.” Don’t miss the time you’re living in; learn to live in the moment, he’s told. Tell your girlfriend (Cleopatra Coleman) how you feel about her. Don’t let her go off alone to a job in Europe.

Time travel is a double metaphor here — about regretting your oversights and not committing to the people you should be close to. In part, it’s a romantic comedy and generally combines well, though artificially, with the science story. The dialogue is sprightly, even when it invokes Schrödinger's cat and the uncertainty principle. There’s a sweet chemistry between Chernick and Coleman, and Stern is spirited as the man from the future. You have to put up with a couple of penis jokes, though. It was filmed in Sudbury. (Available VOD and on iTunes, Bell and Shaw and soon Telus). 2½ out of 5

PHOENIX, OREGON: Here’s a likable, but minor, comedy that might fit the times; it’s a diversion that doesn’t demand too much from you and also doesn’t add any more anxiety. And one more thing: If you can’t go to restaurants these days, you can watch this story from inside one.

James Le Gros and Jesse Borrego are buddies (Bobby and Carlos) who work in a declining, but still pretentious, eatery run by a skinflint boss (Dietrich Bader). When the owner won’t even buy good olive oil anymore and skims from the tip jar, they go out on their own. They revive a shut-down bowling alley where Carlos makes specialty pizza and Bobby recalls the day, years before, when he bowled a perfect game. He’s now moping over losing his mother and his ex-wife and trying to express his feelings into a graphic novel. The film hinges on destiny. He’s trapped by it. Carlos says fight it and do something. There are nutty characters around, a distracting love story (with Lisa Edelstein), and setbacks and twists. An easy way to spend some time. (Vancity Theatre streaming at https://viff.org) 2½ out of 5

VANCITY now has two more films streaming. Corpus Christi, one of my favourites from recent months and an Oscar nominee, is from Poland about an ex-con pretending to be a priest, and L’Innocente is the last film from the Italian master Luchino Visconti, and according to Leonard Maltin, one of his best. A noble woman gets back at her cheating husband.