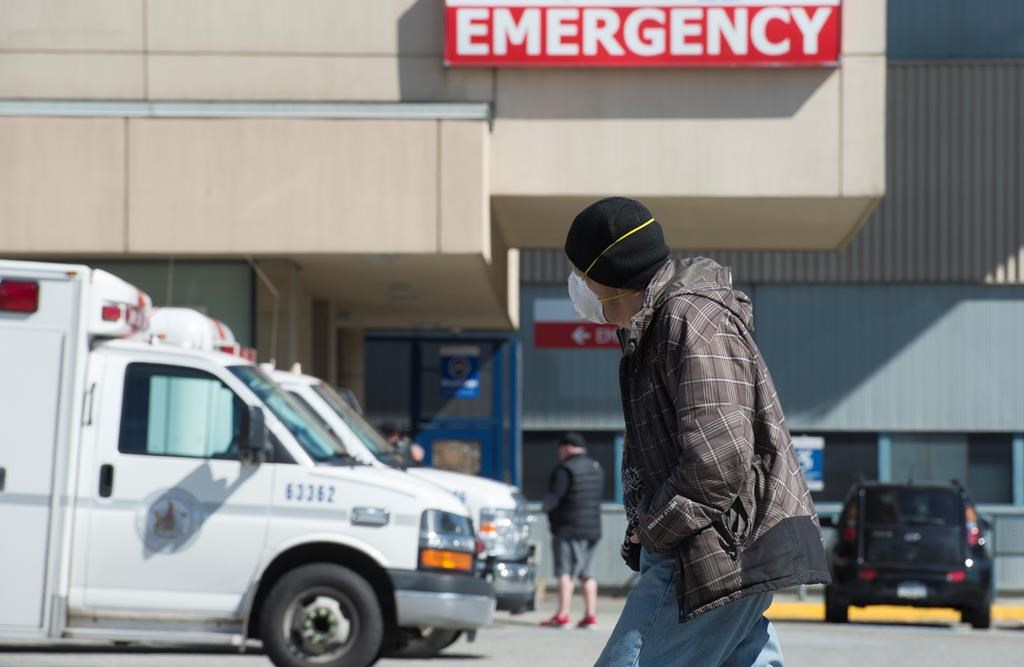 A man wears a protective face mask as he walks past the emergency department of the Royal Columbian Hospital in New Westminster, B.C. on Friday, April 3, 2020. Photo by The Canadian Press/Jonathan Hayward
Previous story
Next story

Faced with a White House-ordered ban on exports of key COVID-19 medical supplies to Canada and abroad, Prime Minister Justin Trudeau is trying a more diplomatic approach with U.S. President Donald Trump, hoping to convince him such a ban will harm Americans and Canadians alike.

Trudeau says he plans to speak with Trump in the coming days about his administration's order preventing brokers, distributors and other intermediaries from diverting scarce personal protective equipment from the U.S. to other countries like Canada.

Trudeau says he is not considering counter-measures against this move by the U.S., but rather he believes the countries can come to a mutual understanding of the need to work together.

"We are not looking at retaliatory measures or measures that are punitive," Trudeau said from outside his Rideau Cottage residence Saturday.

"We know it is in both of our interests to work collaboratively and co-operatively to keep our citizens safe and that's very much the tenor of our conversations and I'm confident that we're going to get there."

He highlighted that thousands of medical workers who live in Canada work every day in the United States, helping to treat novel coronavirus patients in America. He also noted Canada supplies the U.S. with many key COVID-19 supplies including pulp for surgical-grade N95 masks, test kits and gloves.

Trudeau plans to use these examples to ensure the American president understands the inter-connectedness of supply chains and the importance of keeping all goods and services flowing freely between the two countries.

"We recognize that our countries are deeply interlinked in sometimes very complex ways. The necessary goods and services back-and-forth across our border keep us both safe and help us on both sides of the border," Trudeau said.

"We are continuing to engage in constructive discussions with different levels within the administration to highlight that the U.S. will be hurting itself as much as Canada will be hurting if we see an interruption of essential goods and services flow back and forth across the border."

Trump, in his opening remarks at his Saturday press conference, highlighted the need for masks to stay in the U.S.

"We need the masks, we don't want other people getting them," Trump said.

Ontario Premier Doug Ford was far less diplomatic than Trudeau in his reaction to the U.S. measure, blasting the Trump administration for trying to block essential medical equipment from coming to Canada.

"We're the two largest trading partners anywhere in the world. It's like one of your family members (says), 'OK you go starve and we'll go feast on the rest of the meal.' I'm just so disappointed right now," Ford said Saturday.

"We have a great relationship with the U.S. and they pull these shenanigans? Unacceptable."

With hospitals and health care workers across the country rationing masks and other protective equipment due to shortages, Trudeau said the government has been working around the clock to get Canada the resources it needs.

He says Canada will be receiving "millions" of masks in the next 48 hours by a chartered cargo flight, which includes items ordered by Quebec.

Canada has also leased a warehouse in China to ensure timely collection and distribution of these items, Trudeau said, adding that flights chartered by the federal government to transport these materials to Canada going forward will include Canadian companies Cargo Jet and Air Canada.

Signs of a possible issue are imerging in Manitoba.

A Manitoba health official told a news conference that the province has been in touch with vendors to be ready for possible supply interruptions of protective equipment, but has also started gathering "gently used" N95 respirators from all its acute care sites for sterilization and re-use, if they're deemed safe.

"Our understanding is that once it goes to the medical device re-processing and goes through that sterilization process, then they can be used quite a few times, like up to 10 times potentially. But we'll have to make sure that with every sterilization they maintain their integrity," Lanette Siragusa, Manitoba's chief nursing officer, said.

"Soiled, wet, damp and stained N-95 masks will continue to be discarded."

On Friday, Ontario health authorities released stark COVID-19 projections showing the death toll in that province alone could reach between 3,000 and 15,000 — a figure that could have gone as high as 100,000 had economy-crushing restrictions not been imposed.

"We know the situation is serious. We know there are a range of possibilities."

What actually ends up happening in Canada happens depends on the choices and the actions Canadians take every day, he said.

"That's why regardless of the model that is put out there, we can impact that model. We can change the predictions based on how we act: staying home, keeping two metres distant, washing your hands."

Canada's chief public health officer Dr. Theresa Tam warned Saturday that projections and modelling are not "crystal balls" and can vary widely depending on the model being used and the parameters being studied.

She echoed Trudeau's comments that they are highly sensitive to the actions taken by governments and citizens and therefore should be regarded with that in mind.

"Any actions we take now change those ranges of possibilities considerably," Tam said.

Tam also said Canada is currently reviewing new science on the use of face masks by the general public in light of new guidelines released Friday by the Centers for Disease Control and Prevention recommending that people in the U.S. wear homemade face coverings to prevent the spread of the novel coronavirus.

Meanwhile, the Canadian government is giving more financial support aimed at helping the most vulnerable survive the COVID-19 pandemic.

Trudeau announced $40 million for Women and Gender Equality Canada Saturday, with up to $30 million to address immediate needs of shelters and sexual assault centres.

As of Saturday afternoon, there were more than 13,000 confirmed and presumptive cases of COVID-19 in Canada and 231 deaths.