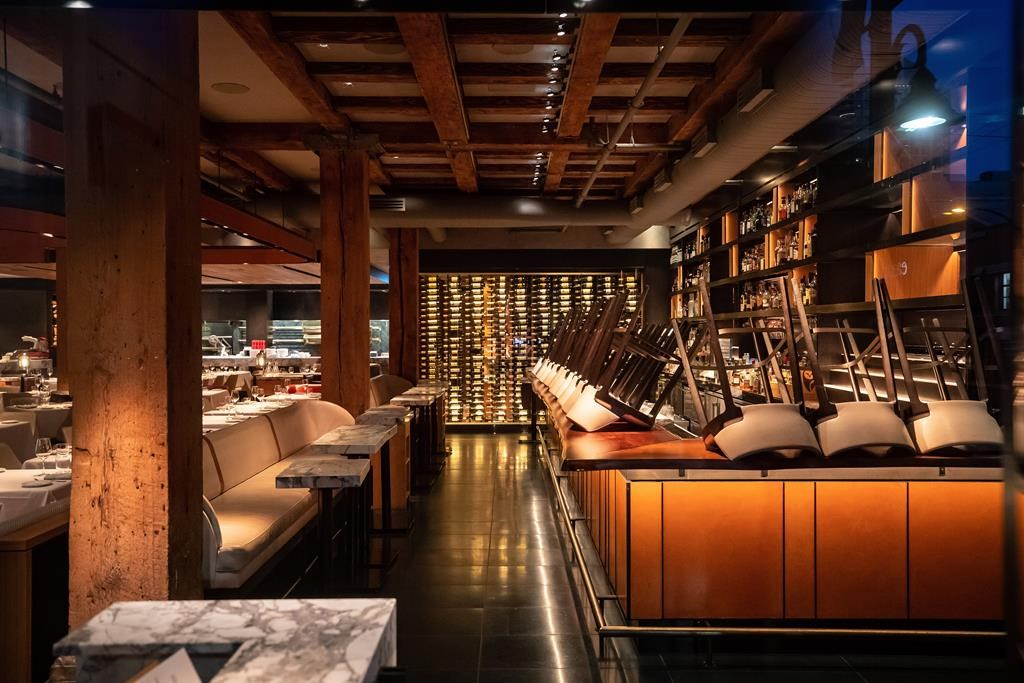 Chairs are turned upside down on the bar at a closed restaurant, amid concerns about the spread of the coronavirus, in Vancouver, on Tuesday, March 17, 2020. File photo by The Canadian Press/Darryl Dyck
Previous story
Next story

Devastated bars and lounges as well as the country's hard-hit cannabis sector will have access to $40 billion in new credit being made available via the government's business bank during the COVID-19 crisis, its CEO said on Sunday.

In an interview with The Canadian Press, Michael Denham said the program from the Business Development Bank of Canada and Export Development Canada would now be open to all businesses.

"Any legal business is eligible to be part of the program — that was what I think some industry groups were concerned about," Denham said from Montreal. "That was clarified and we're going to formally announce it on Monday."

Applicants must go through their own banks to access the program.

The business development bank is a federal corporation with a loan portfolio of about $35 billion. Half the $40-billion from the credit availability program will be in addition to that, Denham said.

Although it backstops higher risk loans than banks do, the Crown corporation does aim to be commercially viable. Those approaching their financial institutions for access to the program will have to show they would have been able to handle a loan before the coronavirus hit.

The development bank, which has about 60,000 clients, has been making other changes given the unprecedented impact of the pandemic, Denham said. It has lowered its interest rates, waived fees, and increased the amount of risk it is taking on with its loans.

"All these changes are meant to make ourselves as easy and accessible within the confines of BDC being a lender," Denham said. "We're doing what we need to do."

Struggling businesses have been pressing for deferment of existing loan obligations as well as access to capital loans to help them weather the COVID storm.

The restaurant sector has been particularly hard hit by widespread closures governments and health authorities have ordered in an effort to curb the spread of COVID-19. A recent survey suggested almost one in 10 restaurants had already closed, and nearly one in five expected to close if conditions didn't improve quickly.

The cannabis industry, which had been struggling pre-pandemic, has also had stores close, although online sales continue.

The development bank has seen a flood of new applicants in recent weeks. As many applications have come in via its online financing platform since the start of the crisis in mid-March as would normally be received in a full year.

"That's indicative of the amount of demand and volume we need to need to deal with," Denham said. "We're organizing ourselves to be able to deal with that level of volume, because of the intensity of the crisis."

Like many other Canadians, the development bank's 2,300 employees were sent home on Friday, March 13. The organization reopened for business on the following Monday, with staff working remotely.

Meanwhile, applications for federal government relief benefits are expected to start flooding in Monday as people who have lost their jobs begin applying for emergency pay. Prime Minister Justin Trudeau said people would start getting their $2,000 a month within five days if they used direct deposit.

"My advice to all entrepreneurs: Understand the programs, talk to your bank, see what's right for you, and take advantage," Denham said.

This report by The Canadian Press was first published on April 5, 2020.

Ontario asks bars and restaurants to close amid COVID-19 pandemic