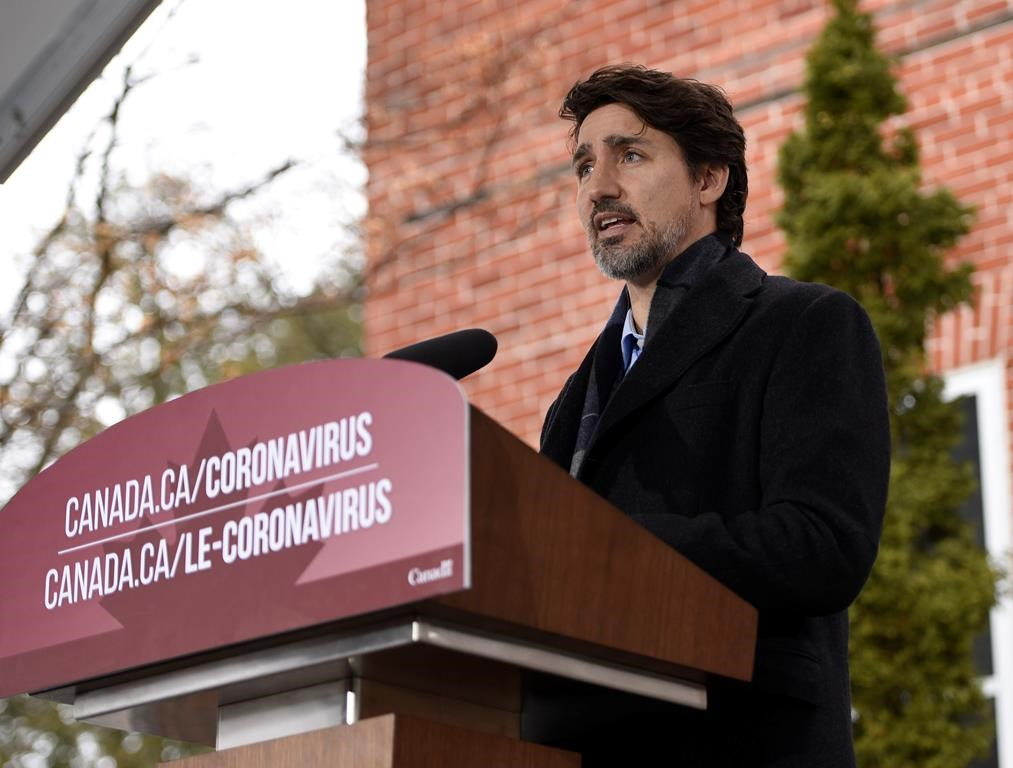 Prime Minister Justin Trudeau speaks during his daily press conference on the COVID-19 pandemic outside of his residence at Rideau Cottage in Ottawa, on Sunday, April 5, 2020. Photo by The Canadian Press/Justin Tang
Previous story
Next story

Canadian hospitals should not throw out used face masks and other protective equipment because public health officials are investigating whether it will be possible to disinfect and reuse them, Canada's public health chief said Sunday.

In her daily briefing to Canadians, Dr. Theresa Tam also said chief medical officers are working on recommendations to the general public for the best uses of homemade face masks.

Tam continues to warn Canadians that the best defence against COVID-19 is for people to stay home as much as possible, wash their hands frequently with soap and keep a two-metre distance from other people when you need to go out for essentials like food or medication.

While she has not yet suggested people should wear non-medical face masks when they go out, she said Sunday her office is working on generating advice for what people should do if they choose to wear a homemade mask, including what materials are best to use.

However, Tam still stressed homemade masks are to keep people who may have the virus from spreading it to others and do little to protect people from getting the virus. The medical masks that can offer protection must be reserved for medical staff, Tam said.

For front-line health care workers, having access to N-95 respirator masks is critical. Thousands of Italian and Spanish health professionals contracted COVID-19 while treating patients and unable to get access to proper protective equipment. In Italy, more than 50 doctors died of COVID-19.

In Canada, the number of infected health workers is growing, with 274 known cases in Ontario health workers alone. Tam said it's important to note not all of the health workers who are sick contracted the illness while at work, but said "every stop has been pulled out" to get the critical supplies to the workers who need them.

That now includes not just increasing domestic production and finding ways to get more imports in a competitive global environment, but also finding a way to reuse the equipment the country already has. She said the science to decontaminate equipment meant for single-use only is being done and in the meantime she is directing provinces and territories not to throw out the equipment, so when the science is ready it can be applied immediately.

"It is one of the most important and I think worthwhile lines of pursuit for PPE right now," Tam said.

More than 14,400 Canadians have now tested positive for COVID-19, and the number of deaths climbed above 258 Sunday, including another resident at the Pinecrest Nursing Home in Bobcaygeon, Ont., bringing the death toll at just that one facility to 23.

Canada looking to disinfect used masks, Tam asks they not be thrown away

In Quebec, which has recorded the highest number of confirmed cases of any province, Premier Francois Legault extended the planned closure of non-essential businesses until May 4, from the initial planned date of April 13, saying "the battle is far from over."

Most Canadians have been isolating at home for three weeks now, with the prospect of many more weeks, and likely months, before the restrictions ease.

The stress of the measures played out at a Walmart store in Sherbrooke, Que., Saturday evening, leaving one of the store's security guards fighting for his life, after a man who was told only one person per vehicle was allowed in the store at a time, allegedly rammed his car into the guard and dragged him several metres.

Prime Minister Justin Trudeau said Sunday he still intends to speak directly with U.S. President Donald Trump about the issue of protective equipment exports from the U.S. to Canada but said he is "confident" the issue will be solved.

The White House said Friday night an order to 3M not to export masks to Canada or Latin America was to target what it called "wartime profiteers" and "unscrupulous brokers, distributors, and other intermediaries operating in secondary markets."

"Nothing in this order," the statement concludes, "will interfere with the ability of PPE manufacturers to export when doing so is consistent with United States policy and in the national interest of the United States."

Newfoundland and Labrador Premier Dwight Ball was the latest premier to criticize the U.S. for the 3M response Sunday, following several others in recent days.

Trudeau also noted Ottawa is preparing to launch its new Canada Emergency Response Benefit Monday, a new $2,000 a month program for Canadians who have lost their jobs or are otherwise unable to work for any reason connected to COVID-19.

"Over the past few weeks, we've all had to make changes to keep each other safe and healthy, and it's a big adjustment," Trudeau said. "While we still have a lot of work to do, we're making good progress on getting you the support you need as quickly as possible."

Canadians can begin applying on Monday for the new benefit, which is replacing employment insurance for most COVID-19 related jobless claims. To try and prevent the website from crashing under the weight of millions of applications, Canadians are being asked to apply on different dates based on their month of birth.

Canadians born in January, February and March can apply on Monday to start, and then Tuesday claims are open to those born in April, May and June, Wednesday for those born July, August or September and Thursday is reserved for people born in October, November or December. Friday, Saturday and Sunday will be open to all.

A vet or an optometrist seeing just emergency patients right now would not be eligible for any government assistance because they are earning a small amount of money for those visits, for example.

Meanwhile, the Queen urged the world to unite in the common fight against COVID-19 Sunday. It was only the fifth time in her 68-year reign that the Queen delivered a speech to rally Britons and members of the Commonwealth. She thanked the front-line health workers, and told everyone else that staying home is their duty, promising it will not last forever.

The Queen also issued a written message directly to Canadians Sunday evening, through Gov. Gen. Julie Payette. The Queen said she understands Canadians, like others in the world are "concerned about the future" but believes the people of Canada will rise to the challenge.

Her speech came just hours before the United Kingdom said Prime Minister Boris Johnson was admitted to hospital because he still has symptoms of COVID-19, more than 10 days after testing positive.

— With files from James McCarten in Washington.

Having previously worked in

Having previously worked in Microbiology, would steam autoclaving not be an effective way to sterilize face masks and protective equipment in order to re-use?

This idea MUST be quashed

This idea MUST be quashed IMMEDIATELY!! Although my experience of 40 years in the operating rooms of a major hospital tends to direct my view to the absolute requirements of a sterile environment, which is not applicable to the clean environment of dailly living, I can assure Dr. Tam that disposable masks are just that: DISPOSABLE!! Any attempt to disinfect them renders them unusable, putting wearers in greater danger than if they wore no mask at all!
Thank you.