By Kelly Geraldine Malone | News, US News, Politics | April 6th 2020
#235 of 1493 articles from the Special Report: Coronavirus in Canada 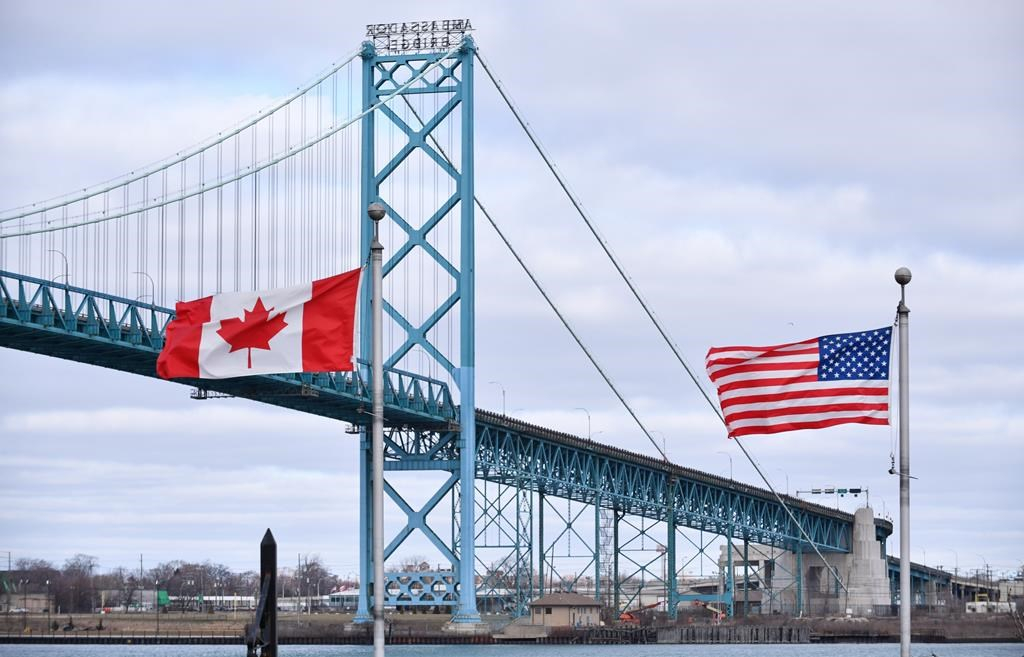 Canadian and American flags fly near the Ambassador Bridge at the Canada/USA border crossing in Windsor, Ont. on Saturday, March 21, 2020. File photo by The Canadian Press/Rob Gurdebeke
Previous story
Next story

When the mayor of a village in southern Alberta stares across the border, he sees family and friends who just happen to call Montana home.

The port of entry between Coutts, Alta., and Sweet Grass, Mont., is one of the busiest on the Canada-United States border, an important crossing on a trade route starting in Mexico.

"We are basically twin communities," says Jim Willett. "The people of the two communities grew up on both sides of the border."

In similar communities across the country, the relationship with their American neighbours drastically changed when the border closed to most travellers last month to help fight the spread of COVID-19. It's the first such closure since Confederation in 1867.

It is still open to people and businesses providing essential services.

The economy in many border communities is inherently linked to traffic between the two countries that brings people into cafes, gas stations and grocery stores. It also employs border agents, duty-free staff and brokers.

As the global pandemic worsens south of the border, the crossings that tie communities on either side together are starting to represent fear.

From his front porch, Willett watches streams of semi-trailers pass by. The transport trucks are allowed to cross as they are deemed an essential service, so the economy hasn't been hit hard yet. But Willett says there's concern for people who do business on both sides of the border if it stays closed for too long.

There are also health worries. A significant portion of the 245 people who call Coutts home are older than 55, so some people are afraid when they see faces they don't know in town.

"It's that tenseness that is in the air all the time that is different. We would like that to go away but we know it's not going to for awhile."

In Amherstburg, Ont., many people are still crossing the border to work in Detroit as health-care providers. That has put leaders in the community, which is only a short drive from the Windsor-Detroit border crossing, in a difficult position. Some positive cases of the novel coronavirus have been linked to the workers.

"They are literally trying to save lives but ... they are exposing themselves to the virus and quite possibly bringing it back," says Aldo DiCarlo, the town's mayor.

"That's something you wouldn't have if you weren't a border community."

Both sides depend on each other for commerce and a healthy economy, DiCarlo says. But on the Canadian side fear is growing because the virus seems to be spreading faster and wider in Michigan.

The mayor says the town is adapting its plans and precautions everyday.

"Living this right now is just crazy," DiCarlo says. "Our town was really starting to thrive.

Nearly every member of the communities near the border crossing in southern Manitoba knows someone who has been laid off or lost their job, says Emerson-Franklin Reeve David Carlson.

"It's a scary time because the hopes are when we come out the other side, people will be able to get back to work and normal life, but that's definitely uncertain at this time," he says.

Sales have plummeted at businesses such as the duty-free shop and gas station. Others have closed. A significant portion of the economy relies on agriculture, so there's also concern for farmers about sales across the border as time goes on, Carlson says.

At the same time, Carlson says, the challenges posed by COVID-19 have shown how resilient the community is. People are calling seniors daily, delivering groceries and ensuring that returning snowbirds have everything they need to self-isolate.

"Being in a more rural and slightly more isolated area, people are able to put things in a good perspective."

This report by The Canadian Press was first published April 5, 2020