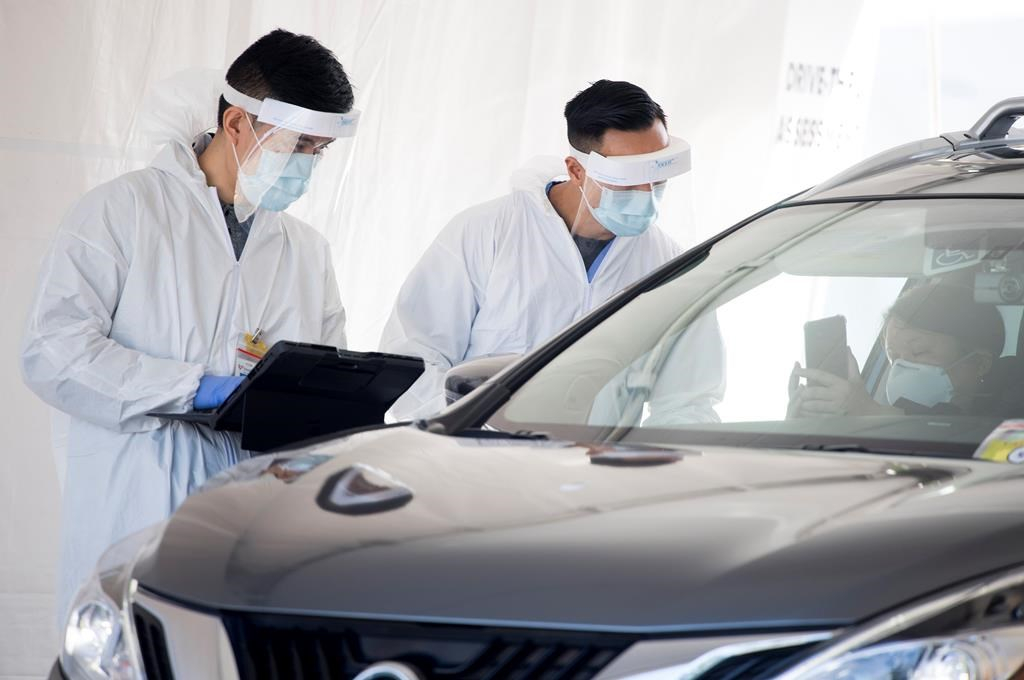 A Fraser Health healthcare worker speaks to a patient at a drive through COVID-19 testing facility in Burnaby, B.C., on Monday, April 6, 2020. Photo by The Canadian Press/Jonathan Hayward
Previous story
Next story

A new poll suggests a growing number of Canadians are frightened of the prospect of contracting the novel coronavirus.

Sixty-four per cent of Canadians said they were personally afraid of becoming ill with COVID-19, compared to 57 per cent two weeks ago.

They appear even more concerned for their loved ones, with 76 per cent of respondents saying they were afraid someone in their immediate family would become infected.

The poll, conducted by Leger and the Association for Canadian Studies between April 3 and 5, surveyed 1,512 adult Canadians and 1,000 adult Americans randomly recruited from its online panel.

Leger's internet-based survey cannot be assigned a margin of error because online polls are not considered random samples.

The poll suggests that as more people feel alarmed about the virus, the issue is also becoming more personal.

While no one polled lived with someone who had contracted the virus, 11 per cent said they had a friend, family member or acquaintance who received a COVID-19 diagnosis — up from four per cent two weeks ago.

Meanwhile the vast majority, 94 per cent, said they have not personally experienced any symptoms, which the poll listed as a cough, sore throat, fever or difficulty breathing.

Their trepidation doesn't stop at their family's health.

Ninety-three per cent of Canadian respondents also considered COVID-19 a threat to the country's economy.

Fear of COVID-19 is growing, suggests new poll of Canadians

Seventy-nine per cent said it is a threat to the health of the Canadian population as a whole, with the same number saying it threatens day-to-day life in their community. Just over half of respondents deemed the pandemic a threat to their personal finances.

Still, the poll suggests Canadians are largely and increasingly satisfied with the measures being taken by governments to fight the disease.

That's particularly true at the provincial level, with 82 per cent approval. The federal government has seen an increase in approval, with 72 per cent satisfied, up from 65 per cent two weeks ago.

Fewer Canadians now believe that the pandemic has been blown out of proportion, with 83 believing COVID-19 is a real threat compared to 77 per cent two weeks ago.

The last few weeks have seen serious moves by all levels of government to bring in stringent physical distancing measures to limit the spread of the virus, as well as the introduction of several relief programs by the federal government to ease the financial burden of the virus for individuals and businesses.

That stands in contrast to the United States, where there are 330,891 confirmed cases of the virus according to figures provided by the Centers for Disease Control on Monday.

There, 26 per cent say that the disease has been blown out of proportion while only 13 per cent in Canada believe the same.

What hasn't changed is the fact that most people in Canada — 67 per cent — still believe the worst the virus has to offer is still ahead.

This report by The Canadian Press was first published on April 7, 2020.

Until we have a specific and

Until we have a specific and sensitive test to detect Covid-19 antibodies we will not know accurately how many people had non symptomatic Covid-19 and thus how dangerous it actually is. If there are a lot of people who had no or very mild symptoms then it will seem less dangerous. If there are very few people who test positive for the antibodies and who had no symptoms then it will remain a very dangerous disease,