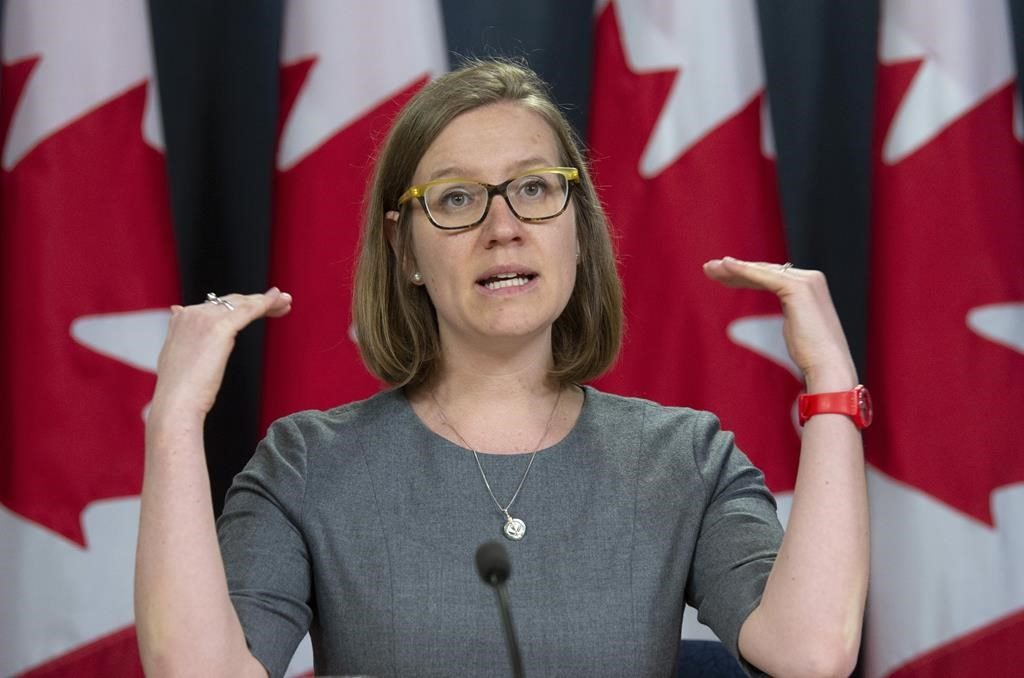 Democratic Institutions Minister Karina Gould responds to a question during a news conference in Ottawa, on Monday, April 8, 2019. File photo by The Canadian Press/Adrian Wyld
Previous story
Next story

Days before Canada announced more than $100 million in new foreign aid to fight COVID-19, a federal minister and a leading aid advocate said the country can't afford to scrimp on its overseas spending in fighting COVID-19.

Robbing Peter to pay Paul was simply not an option, said International Development Minister Karina Gould and Nicolas Moyer, the president of the Canadian Council for International Co-operation, an umbrella group for aid agencies.

Their pointed discussion came last Thursday during an online meeting between Gould and the aid sector as the government was preparing to announce more new money on Sunday.

The discussion highlighted a key concern: how to sell spending millions of dollars overseas when the government was trying to bolster a flagging domestic economy with tens of billions in new spending at home.

"There's really a risk that the most vulnerable will be forgotten in all of this," Moyer told Gould.

Gould replied that the government would work hard to protect what was already being done to help people in poor countries "and to have our COVID response to be above the work that we're doing so it's not robbing from Peter to pay Paul."

On Sunday, Gould announced that Canada was increasing its international aid by $109.5 million on top of the $50 million the government announced earlier in March to help stop COVID-19 abroad.

The new money included $30 million to specific countries, $40 million for the Coalition for Epidemic Preparedness Innovations co-ordinating the world's efforts to find a vaccine for COVID-19, and $84.5 million for a number of international groups.

It was part of Canada's response to the call by UN Secretary-General Antonio Guterres, who launched a $2-billion global appeal last month. He called for a co-ordinated response to help the world's war-torn, displaced and otherwise most destitute people who are facing new misery because of the pandemic.

Stephen Lewis, a former Canadian ambassador to the UN, said the new money is "a start but not nearly enough." He said, "Canada has been delinquent for years" with its aid spending representing 0.28 per cent of Gross National Income, far below the 0.7 per cent UN target that Canada's Lester Pearson once set.

"The average amongst the wealthy donor countries is 0.31," said Lewis. "Canada should at least meet the average, providing several hundred million more."

During Thursday's discussion, Gould stressed that domestic political considerations could not be ignored, and that Canada had a duty to protect its own citizens from the outbreak.

Gould said the global economy was in uncharted waters and she noted the government was spending upwards of $70 billion on wage subsidies.

"We can take all of these extraordinary measures here in Canada — the closing of our borders, the social distancing that we're taking — but if it comes up somewhere else in the world, we could see a secondary wave here in Canada," Gould said.

"It's important to frame this as part of our domestic response, and part of protecting the health and safety of Canadians."

After the meeting, Moyer's group sent Gould a letter signed by 180 organizations urging Canada to spend money internationally on the pandemic, and offering to help her explain why to Canadians. "We are keen to work with you and Global Affairs Canada to shape a new collective narrative for global co-operation," it said.

Stuart Hickox, the Canada director of the ONE Campaign advocacy group, said in a statement on Sunday following Gould's announcement that "Canadians have been horrified and outraged when some countries tried to seize this crisis to promote their selfish interests" — an apparent reference to reports of critical medical supplies not reaching Canada from the U.S.

"We will not be safe until we beat this virus everywhere. Now is the time to prevent a second wave and future pandemics."

Dr. Tanjina Mirza, the co-chief of Plan International Canada, said it might be "human nature to look inward during a crisis," but more needs to be done to help more vulnerable people, including children and girls.

This report by The Canadian Press was first published on April 6, 2020.