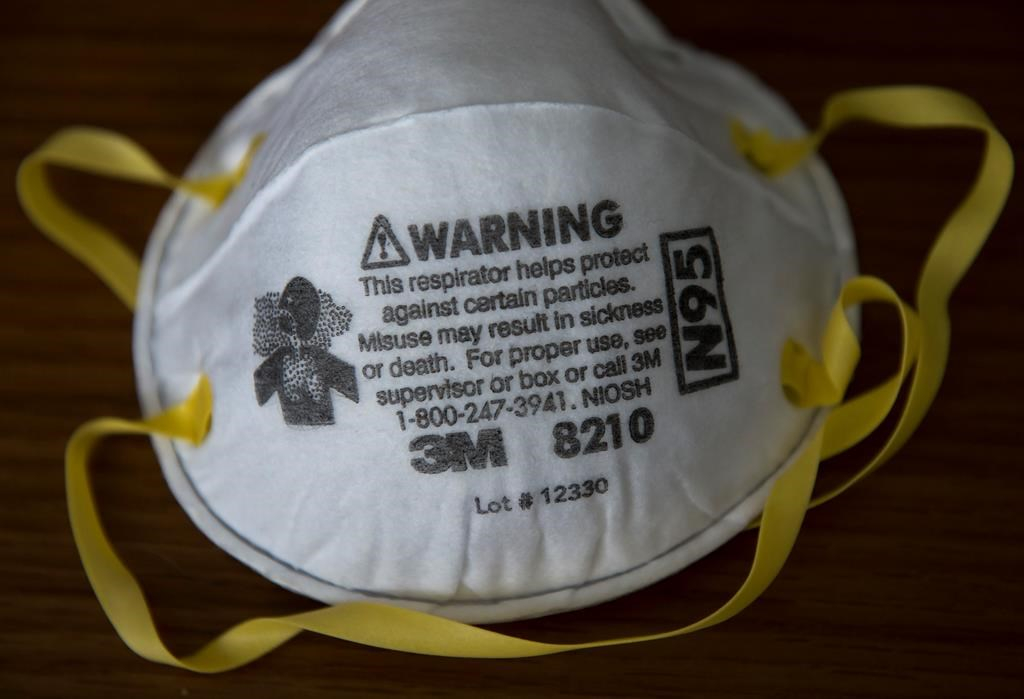 A 3M mask which health care workers are in dire need of is shown in Mississauga, Ont., on Friday, April 3, 2020. File photo by The Canadian Press/Nathan Denette
Previous story
Next story

The federal government is stepping up efforts to produce ventilators, face masks and surgical gowns in Canada, while it continues to try to get millions of pieces of equipment ordered from international suppliers actually shipped to the country.

That includes an order of 500,000 N95 respirator masks from Minnesota-based 3M, which Prime Minister Justin Trudeau said should arrive in Canada on Wednesday, while acknowledging the duel with U.S. President Donald Trump over medical supplies is not entirely over. 3M reached a deal with the White House to continue delivering its products to Canada and Latin America late Monday.

"We continue to work with Americans," Trudeau said in his daily briefing to Canadians outside his Ottawa home Tuesday.

"As I've said, we've had constructive and productive conversations that have assured that this particular shipment comes through, but we recognize there is still more work to do," he said.

Deputy Prime Minister Chrystia Freeland later added that there are more shipments expected from 3M and all of them should arrive as expected, but that there are orders with other U.S. suppliers that have not been given clearance to be exported yet.

Canada's main argument to the United States is that they are reliant on raw materials, manufactured goods and health-care professionals from Canada, and that both countries will do better if neither blocks those supplies or people from crossing the border.

As of Tuesday, Canada has recorded more than 380 deaths due to COVID-19, and hundreds of Canadians remain hospitalized in critical condition fighting the respiratory illness. Nationally, the number of confirmed cases grew to just under 17,900.

Quebec on Tuesday projected that in the best-case scenario, COVID-19 will peak in that province in about 11 days, and kill 1,263 people by the end of April. In the worst-case scenario, more than 8,860 Quebecers will die in that timeframe, though provincial officials anticipate the final outcome based on current data will fall closer to the best-case numbers.

Later, Alberta unveiled a probable scenario, which projects between 400 and 3,100 deaths by the end of the summer. An elevated scenario would have between 500 and 6,600 deaths.

Last week, Ontario estimated between 3,000 and 15,000 Ontarians will die of COVID-19 over the course of the pandemic.

The federal government has not yet released national projections.

The main message from Ottawa on Tuesday was about efforts to get the needed medical equipment. Procurement Minister Anita Anand said more than 230 million surgical masks and 75 million N95 respirator masks have been ordered but cautioned the global supply chain is so fragile they cannot guarantee how many of those will actually arrive.

Trudeau said to ensure a stable supply, Canada has to make a lot more of these things at home — and that the country is not alone in not having what it needed on hand.

"The entire world was unprepared," he said.

Almost 5,000 Canadian companies stepped up with offers to help make needed equipment, including apparel companies making surgical gowns, using materials provided by construction and auto manufacturers. Canada did not produce the material typically used in the gowns, but some companies discovered material used in air bags or house wrap could work instead.

Trudeau also said Canada is working with several companies to get 30,000 new ventilators made in Canada. His office later clarified that only 1,020 new ventilators have actually been ordered, from Toronto-based Thornhill Medical. However, there are letters of intent with other companies for up to 29,000 more.

Access to ventilators is a main issue for treating critically ill patients with COVID-19-induced pneumonia, and a lack of ventilators in hard-hit countries like Italy forced doctors to choose which patients would get one and which would not.

As the virus started to rampage across Canada a few weeks ago, inventories found about 5,000 ventilators across the country and provinces have been trying to order more. Few provinces have indicated how many they think they need, and it's also hard to gauge exactly how many patients are on a ventilator right now because provinces report statistics differently.

Ontario already placed an order for 10,000 new ventilators, and as of Monday had nearly 2,000 critical care beds with ventilator capacity, up from almost 1,300 a month ago. Ontario's COVID-19 projections released last week expect the illness to peak in late April, with at least 1,200 patients in intensive care.

Meanwhile, federal aid packages to help unemployed workers and struggling companies are beginning to roll out this week.

Top-ups to GST rebates for lower-income Canadians are set to go out April 9, the same day the first Canadians might see their $2,000 from the Canada Emergency Response Benefit.

Treasury Board President Jean-Yves Duclos said Tuesday more than 966,000 Canadians applied for the benefit Monday, the first day applications were accepted. That is, he said, about the same number of people who apply for employment insurance over six months. It also included only those with birthdays in the first three months of the year, as the government is staggering the application process to avoid overloading the system.

Nearly 3.7 million Canadians have now applied for employment insurance or the emergency benefit since mid-March, said Duclos, and more than three million applications have already been processed. Anyone who applied for EI because of COVID-19 after March 15, will automatically be processed by the CERB program instead.

The government's increased wage-subsidy plan is also moving forward. Trudeau said Tuesday the government shared its proposed legislation with opposition parties. They are now negotiating on when to hold an emergency session of the House of Commons to pass the bill.

This report by The Canadian Press was first published April 7, 2020