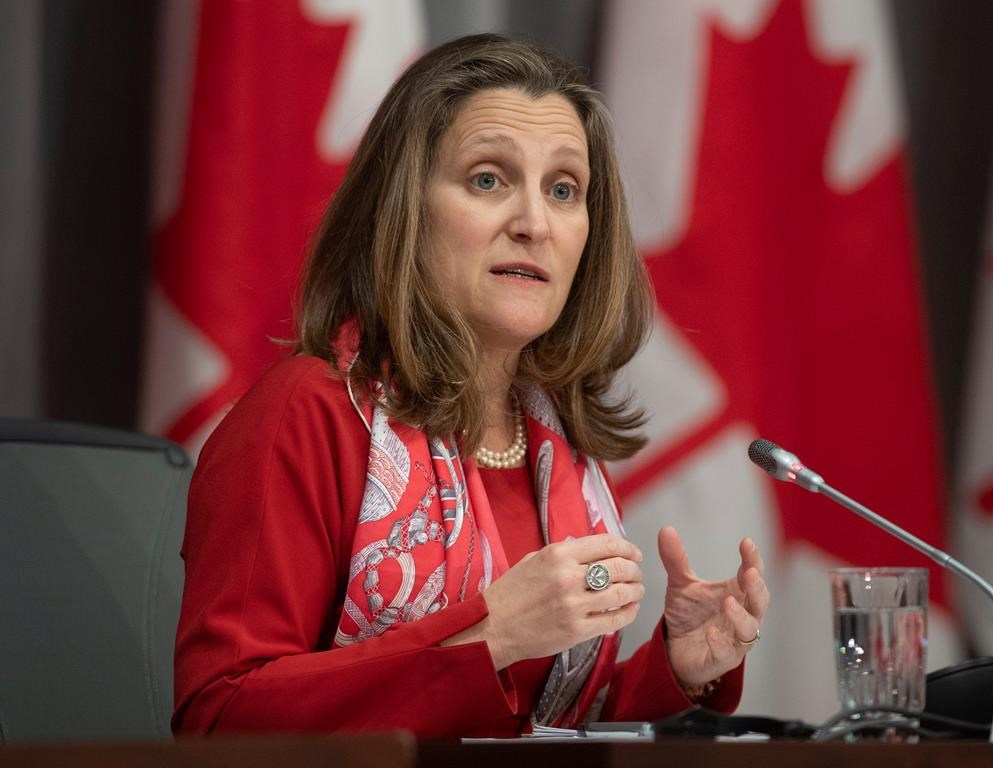 Deputy Prime Minister and Minister of Intergovernmental Affairs Chrystia Freeland is seen during a news conference in Ottawa, on Wednesday, April 8, 2020. Photo by The Canadian Press/Adrian Wyld
Previous story
Next story

Canada's relationship with the United States has always required "constant gardening," but never more so than in the throes of a global pandemic, Deputy Prime Minister Chrystia Freeland said Wednesday as she cheered the partial arrival of a shipment of face masks.

Freeland said the "first part" of Canada's order of N95 masks — 500,000 units — arrived late Tuesday night from Minnesota-based 3M, which had been pushing back against White House demands to stop exporting the coveted medical gear.

But despite that small victory and the minister's carefully parsed language, the message about the future was unmistakable: like so many other countries around the world, Canada will be fighting an uphill battle every step of the way when it comes to procuring the precious protective armour so vital to defending against COVID-19.

"This is work that is constant, and we just have to keep at it," she told a news conference in Ottawa.

"That is the nature of our trading relationship with the United States in general — that it requires constant work, constant gardening. In this time of a true global pandemic, of a real crisis, it requires particular attention, and we are devoting absolutely that necessary attention to it."

Neither Freeland nor government officials were able to say just how many more masks were outstanding. But draft rules released Wednesday by the Federal Emergency Management Agency and the Department of Homeland Security suggest shipments of personal protective equipment beyond American borders will be subject to a heightened level of scrutiny.

The rules do include an exemption for manufacturers with "continuous export agreements" with customers outside the U.S. since the beginning of the year, "so long as at least 80 per cent of such manufacturer's domestic production ... was distributed in the United States in the preceding 12 months."

But they also seem to suggest it will be FEMA itself that determines whether or not a particular shipment qualifies.

"If FEMA determines that a shipment of covered materials falls within this exemption, such materials may be transferred out of the United States without further review by FEMA."

The rules give FEMA the discretion to redirect foreign orders that aren't covered by the exemption, depending on a number of factors, including the extent of shortages at home, the potential disruptions to domestic and international supply chains, the risk of hoarding or price-gouging, as well as humanitarian and diplomatic considerations and international relations.

"FEMA will work to review and make determinations quickly and will endeavour to minimize disruptions to the supply chain."

Dan Ujczo, an international trade lawyer with the firm Dickinson Wright in Columbus, Ohio, cheered the federal government in Ottawa for successfully negotiating the successful purchase of N95 masks — one of the most hard-to-find items in the international scavenger hunt for protective medical gear.

But it's only going to get harder from here, he warned.

"A co-ordinated approach to secure the products would have been ideal, but that time has passed," Ujczo said.

He predicts more supply-chain challenges as states and provinces seek to restore depleted stockpiles and companies retool their production lines to build medical equipment like ventilators.

"Our cross-border supply chains are too integrated for a barrier, even a temporary one like the FEMA order. The US needs to hunker down with Canada as soon as possible to develop a shared plan."

Freeland said that's precisely the message Canada's emissaries have been persistently delivering to their U.S. counterparts.

"We have been making the case for many days now to our American partners that when it comes to medical equipment and services, the relationship between Canada and the U.S. is truly reciprocal," she said.

"Thus far, we have been met with real comprehension from our American partners, both in the administration and at the business level."