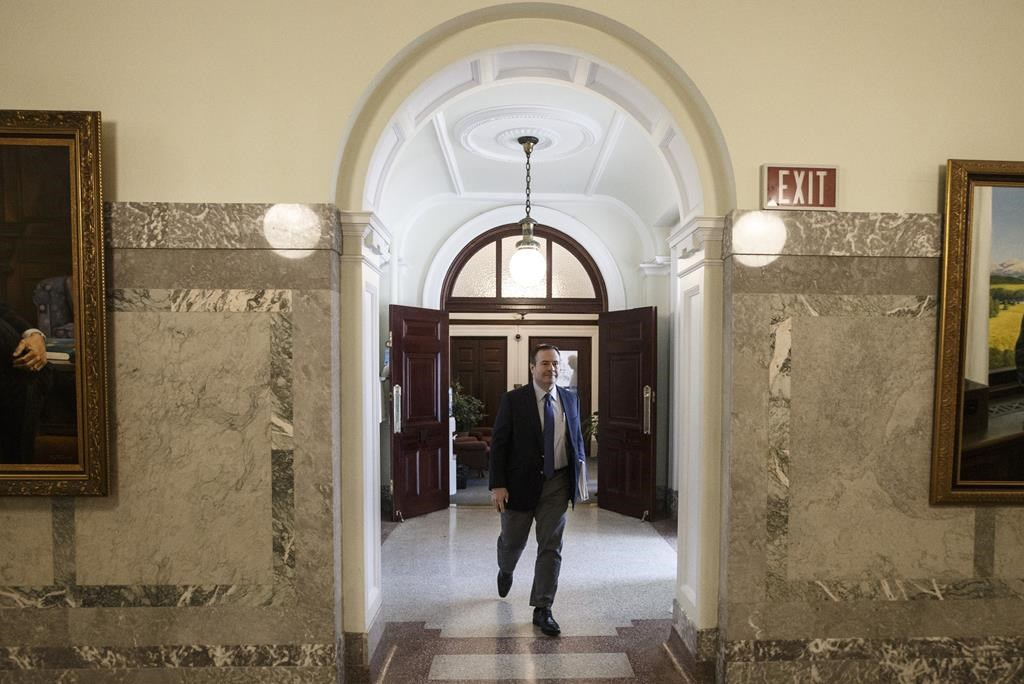 Alberta Premier Jason Kenney makes his way to the chamber as the Alberta Legislature sits through the weekend to pass a series of emergency bills, in Edmonton on Friday, March 20, 2020. File photo by The Canadian Press/Jason Franson
Previous story
Next story

The Alberta Medical Association has filed a lawsuit against the province over how the government pushed through changes in the way doctors can bill for their services.

The association's president, Dr. Christine Molnar, said in a letter to physicians Thursday that a statement of claim had been filed.

"If you told me a year ago that I would serve the minister of health with a statement of claim for a constitutional challenge, in the midst of the worst public health crisis in a century, I would have been incredulous," Molnar wrote.

"Yet, that is what happened this morning."

The Alberta government went ahead with changes to a funding framework on March 31 despite pleas from doctors and the association to delay them so that physicians could focus on the COVID-19 pandemic.

Molnar said doctors will remain on the front lines for Albertans, but the association was left with no other option than to defend its members in court.

"The government walked away from negotiations on Feb. 20 and terminated our contract," she said in an interview. "In doing so, (it) violated the charter rights of all Alberta physicians by removing their access to third-party arbitration."

The lawsuit asks for fair and reasonable negotiations toward an agreement and the right to arbitration.

Premier Jason Kenney declined to comment on the legal challenge, but said Alberta physicians are the best compensated in Canada.

Alberta doctors file lawsuit against province over changes to billing

"We want to support our physicians. We believe they should not only be paid fairly but generously," he said at an infrastructure announcement.

"What we need to do is prevent that kind of compensation from getting even more out of whack with the rest of the country in the future."

Total physician compensation remains flat at $5.4 billion in the government's 2020-21 budget, but the new funding framework will change how doctors are paid for their work.

Doctors have said that the changes will force hundreds of clinics across the province, particularly in rural areas, to reduce staff or close their doors.

Kenney suggested clinics are no different than other businesses during the pandemic.

"Perhaps many family physicians are going through challenging times right now, because many fewer people are coming to their clinics," he said. "It's the reason so many other businesses are struggling."

Kenney said the pandemic is why the government also introduced a new billing code for phone and video visits with family doctors.

The province has also suspended changes to how family doctors are paid for in-person visits with patients who have complex medical issues and has delayed changes to stipends for some hospital physicians.

However, Molnar has said that other changes that went ahead have been disruptive and damaging to doctors.

The association's lawyer, Patrick Nugent, said the lawsuit is about process and fairness rather than reversing the changes.

"This is about either compelling the government to engage in fair and meaningful bargaining and, if that's not successful, having recourse to an independent third-party dispute resolution mechanism."

The lawsuit seeks $5 million in general damages for what it says was a breach of physicians' rights and freedoms, and another $250 million in monetary losses for doctors due to the alleged breach of contract.

This report by The Canadian Press was first published on April 9, 2020