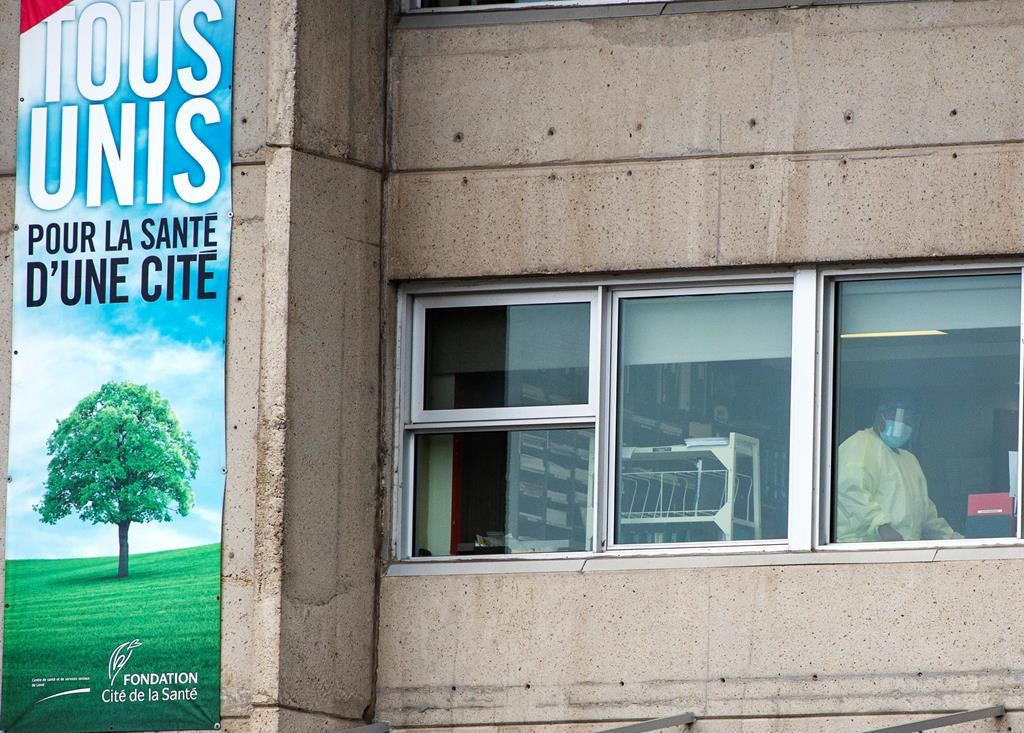 A health-care worker is seen in the window of the Centre d'hebergement Sainte-Dorothee, on Thursday, April 9, 2020 in Laval Que. The residence has reported over 100 confirmed cases of COVID-19. Photo by The Canadian Press/Ryan Remiorz
Previous story
Next story

A health-care union in Quebec says workers dealing with at-risk patients are going without protective equipment in some cases, sparking criticism of the national emergency stockpile.

The Federation interprofessionnelle de la sante du Quebec told the House of Commons health committee that some workers who provide home care or work in the province's nursing homes have been forced to go without any protection from COVID-19.

Vice-president Linda Lapointe says other nurses and care providers have been given only limited supplies of personal protective equipment, and have been told to reuse disposable masks or wear them for longer than intended.

"This is all happening because of an obvious lack of preparedness, and at the peril of health-care workers," Lapointe, speaking in French, told the committee Thursday.

"Difficulties with supply cannot warrant putting health-care workers at risk of getting infected."

She lauded the federal government for its efforts to try to track down more supplies for front-line workers, but said she is distressed by the improvisational approach she's seen in dealing with the shortage in the meantime.

"A well-stocked national stockpile would have been highly useful, especially given that Canada is highly dependent on foreign suppliers of personal protective equipment," she said.

Lapointe is one of several health-care representatives who've told the committee about the dire situations involving a lack of protective equipment playing out on the front line in recent days.

On Tuesday, the Canadian Federation of Nurses Unions told the committee about similar concerns about how front-line workers were put at risk by the lack of supplies.

"We have stories of nurses being given bags to take their masks home so they can reuse them," said president Linda Silas.

Ian Culbert, executive director of the Canadian Public Health Association, told the committee Thursday the national emergency stockpile of protective equipment has been the biggest failure of Canada's response to the epidemic to date.

"We have to rethink what the national emergency stockpile should look like in the future," Culbert said.

Last week Health Minister Patty Hajdu acknowledged the federal emergency stockpile was likely insufficient, and that public health resources had been under-funded by governments for decades.

When questioned about the stockpile at a briefing on Thursday, chief public health officer Dr. Theresa Tam says the national stockpile was never intended to supply the entire health-care system.

While the stockpile was designed to provide some surge capacity to regions in need, the primary responsibility for managing those resources falls to the provincial and territorial health systems, she said.

"At the federal level, we are much more strategic about what we have in that stockpile, and that's deliberate," she said.

Rather, the stockpile is primarily central storage for supplies that can't be found elsewhere, like the smallpox vaccine.

The federal public health agency also plays a role in co-ordinating the purchase of new supplies in times of crisis, which has played out during this pandemic.

Culbert suggested the stockpile might need changing to ensure it is replenished more often, and there is greater collaboration with provincial and territorial health systems.

He said as supplies in the federal stockpile approach their expiration date, they should be passed on to provincial health systems and topped up again, so fewer supplies to go waste, for example, he said.

Canada must remember this when it comes time for the next pandemic so it can be prepared, he said, and not let the memory fade as it has in the past.