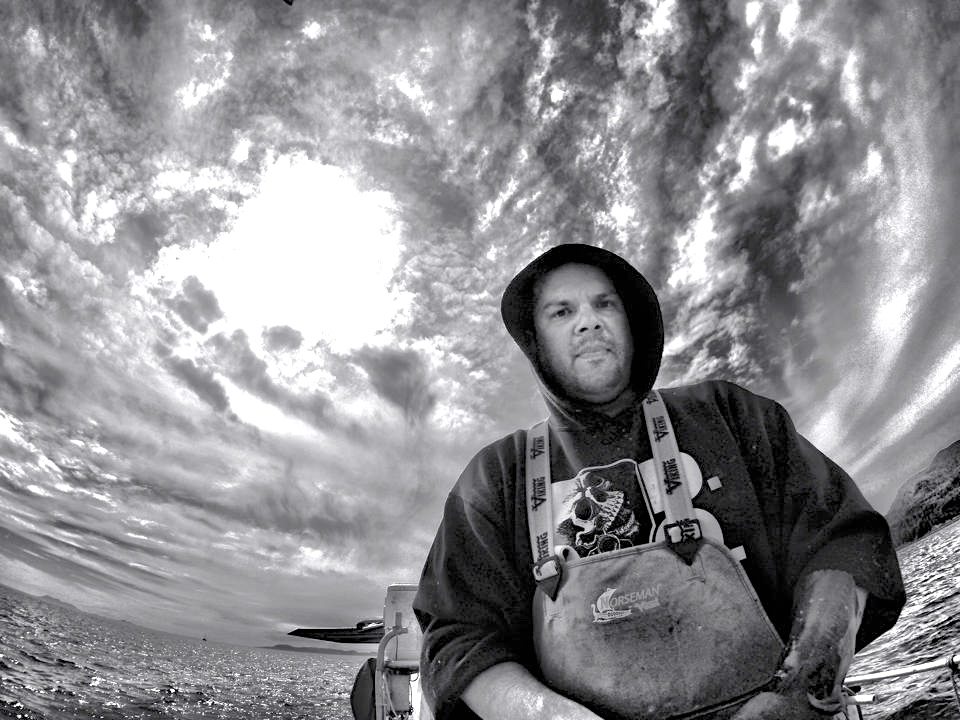 Lucas Chickite was standing on the bow of the Armada, a vessel working a scallop farm off the east shore of Rebecca Spit on Thursday at around 6 p.m., when he heard a cry for help from a capsized kayaker. Photo credit: Lucas Chickite
Previous story
Next story

The Quadra Island fisherman was standing on the bow of the Armada, a vessel working a scallop farm off the east shore of Rebecca Spit, on Thursday at around 6 p.m., when he heard a faint sound over the noise of the engine and hydraulics.

The west wind had come up to 20 knots in the afternoon and the water was showing whitecaps. He strained his ears again and looked around, but didn’t see any other boats.

He was about to start working, when he heard it again.

“It definitely sounded like someone cried, Help,'” said Chickite. “I starting scanning the horizon and I saw a white hand flash out of the water.”

Yelling out to the captain, the Armada changed course, gunning it for the spot Chickite had seen the arm surface about 300 metres away.

“There was no way he was going to make it back. He was so far out there,” said the 40-year-old fisherman from the We Wai Kai Nation.

As the Armada approached, they could see someone in the water wearing a life-jacket.

“I started getting ropes tied up and the hydraulic lift going,” Chickite said. “We got him out of water as fast as we could. We winched him up into the air and on to the deck.”

The young man couldn’t stand up on his own, collapsing on deck and saying couldn’t feel his legs.

“I pulled him on to rubber matting where he’d be warmer,” said Chickite. “He was speaking, but really, really slowly. He must have used every last ounce of energy to call for help.”

“It definitely sounded like someone cried, Help. I starting scanning the horizon and I saw a white hand flash out of the water,” Quadra Island commercial fisherman Lucas Chickite about the rescue of a capsized kayaker Thursday.

The young man, who appeared to be between 18 and 20 years old, told Chickite he’d been in the water for a couple of hours after running into trouble in his kayak during a return trip to Quadra from Cortes Island.

“When he was out there, the Cortes ferry drove right on by and didn’t hear or see him,” Chickite said, adding traffic on the water that day was sparse.

“That must have been really discouraging for him.”

The Armada radioed ahead for an ambulance and raced back to Heriot Bay.

“He was shivering a lot, which is a good sign your body is trying to stay warm. I told him, ‘Just keep shivering,’” Chickite recalled. “He was trying to go to sleep, but I kept telling him to stay awake.”

When the Armada arrived at dock, luckily two first responders happened to be on scene. Everybody worked to keep the young man warm and get him some dry clothes until the ambulance arrived.

“He said he could feel his legs again, so that was a good thing,” Chickite said. “But he was trying to give us numbers to call family, but couldn’t remember them right, and he didn’t really know where he was. Whether he was on Quadra or Cortes.”

When the ambulance took the young man away, he was still conscious, Chickite said, hoping it was a good sign.

“I haven’t heard anything yet. I don’t know if I will,” he said. “I’m just hoping for the best. No news is probably good news.”

Chickite comes from a long line of commercial fishermen from Cape Mudge. His uncle Ollie Chickite was the last skipper of the iconic BCP45 seiner made famous for gracing Canada’s $5 dollar bill from 1972 to 1986.

The younger Chickite understands the despair of being stranded in water far from shore.

“I’ve been on the water my whole life and flipped a boat before, so I know what it's like,” he said. “It’s shitty knowing you’re not going to make it to the beach on your own.”

Thursday’s rescue wasn’t the first for the Armada, Chickite added.

“It picked up somebody who had jumped off the Cortes ferry a while back,” he said.

Neither was it the first time First Nations commercial fishers have plucked people from B.C.'s frigid waters in a marine emergency.

Following the sinking of the MV Leviathan ll, killing six people, marine safety experts recommended First Nations coastal communities get resources and support to officially handle search and rescue efforts in the waters of their territories.

“Because we’re always busy and out on the water, it would be nice to have some equipment funded,” Chickite said.

People out on the water should always have an escape plan, he stressed. “A cell in a zip-lock bag, flares or whistles. Some small things that save lives.”

Chickite, who returned to work Friday, admitted he was tired.

“I didn’t have a good sleep. Nerves, I guess,” he said. “We’re going to clean up the boat, do a half-day’s work and call her good.”

Chickite hoped the kayaker was OK, and mused how close he’d come to not hearing the young man’s distress call.

“He should buy a lottery ticket,” he said. “Holy cow. You can’t get any luckier than that kid.”