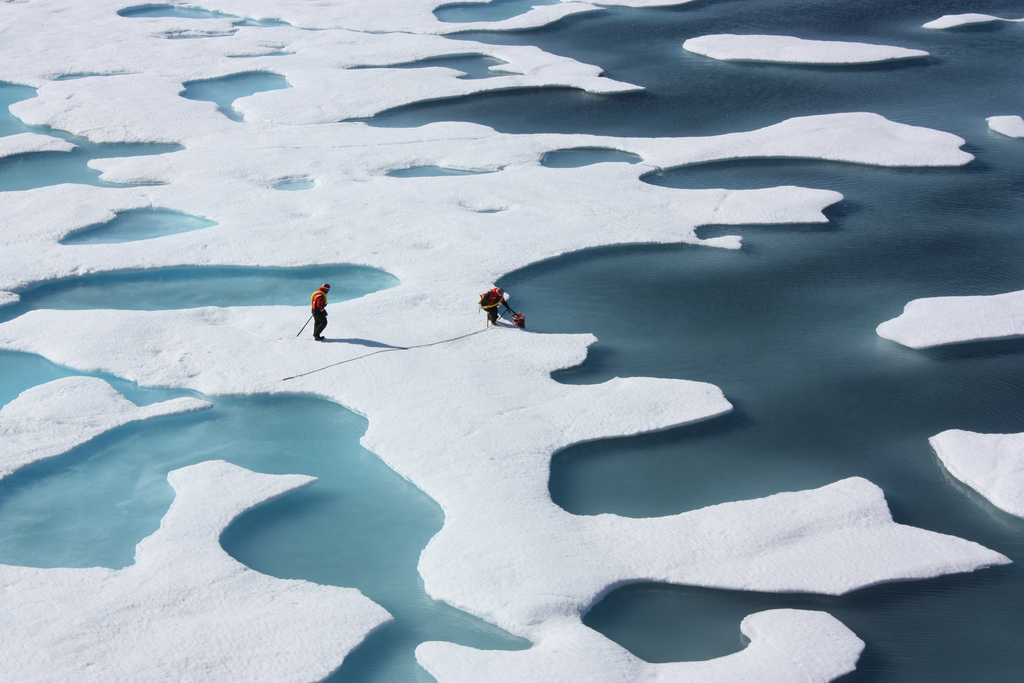 File photo of researchers on a NASA-funded mission examining melt ponds in the Arctic near Alaska, July 12, 2011. Photo by NASA
Previous story
Next story

When the Phocine Distemper Virus infects its victims, it produces symptoms that sound eerily familiar: fever, and difficulty breathing.

The respiratory disease affects animals like the harbour seal, of which it was responsible in 1988 for tens of thousands of deaths in the North Atlantic off the coast of Europe. More recently, scientists discovered, it had also infected northern sea otters — on the other side of the world.

Climate change is heating the atmosphere and shrinking the Arctic ice cap to such an extent that gaps are appearing. When these channels in the ice open up, it allows animals to move across territory they couldn’t previously access, researchers have found.

Plying these newly ice-free waters, the animals may have unwittingly provided a free ride for PDV, which eventually jumped across the species barrier to sea otters in the North Pacific, according to the study in the journal Scientific Reports.

“We saw peaks of infection in the years after there had been a channel in the ice,” said Tracey Goldstein, a professor in the department of pathology, immunology and microbiology at the University of California, Davis and one of the researchers, in an interview.

“So that does suggest that, when there was an opening in the ice, the animals were able to move, and bring their viruses with them.”

'Put the Arctic Ocean in quarantine'

Phocine Distemper Virus (PDV) is not known to be zoonotic, which means a disease that jumps from animals to humans.

But scientists have long expressed concerns there might be “zombie diseases” preserved in the frozen Arctic ice, and that climate change would melt away the barriers to these diseases, opening up a “Pandora's box."

As the COVID-19 pandemic unfolds against the backdrop of the climate crisis, concerns have resurfaced over the Arctic's possible role in virus transmission

A 2019 strategy document from Canada's national Inuit organization, Inuit Tapiriit Kanatami, noted that one of the impacts of climate change on Inuit populations would be an increased exposure to zoonotic diseases.

As the COVID-19 pandemic unfolds against the backdrop of the climate crisis, which is heating up the Arctic at twice the rate of the planet, these concerns have resurfaced.

"The Arctic Ocean does not only keep our planet cool...it keeps the local permafrost, with its payload of pathogens, frozen," reads a March 30 statement from the Parvati Foundation.

"To protect our global immunity, we must put the Arctic Ocean in quarantine now. We are seeing today the deadly consequences of delay in clamping down to prevent disease."

Polar sea ice coverage in both the Arctic and Antarctic oceans had their second-smallest average annual coverage of sea ice in 2019, according to the U.S. National Oceanic and Atmospheric Administration.

Arctic sea ice has thinned to the point where it is now likely "unprecedented for at least 1,000 years," said the Intergovernmental Panel on Climate Change.

As the ice continues to shrink, it’s not just animals that are changing their behaviour, it’s people, too, noted Goldstein, one of the 22 researchers who published the study showing how PDV spread.

A recent Arctic Council report showed that ship traffic in the region jumped by a quarter from 2013 to 2019. These ships can introduce pollution, such as dirty marine fuel, into the region.

“And it’s probably not a great thing for spreading pathogens.”

Human activity is forcing animals all over the world to change their behaviour. Now, scientific research is demonstrating how closely tied together animals, humans and nature are when it comes to some infectious diseases.

Scientists have suggested that the novel coronavirus itself came from bats, possibly via another intermediary animal. The SARS coronavirus jumped from bats to civets, and then to humans, triggering the outbreak in 2002.

Research in Proceedings of the Royal Society released on April 8 showed that wild animals at risk of extinction due to human activity carried over twice the zoonotic diseases, as compared to animals that were not at risk of being wiped out.

“Among threatened wildlife species, those with population reductions owing to exploitation and loss of habitat shared more viruses with humans,” the study reads.

“Our findings provide further evidence that exploitation, as well as (human) activities that have caused losses in wildlife habitat quality, have increased opportunities for animal-human interactions and facilitated zoonotic-disease transmission.”

Goldstein's team worked with groups in Alaska to put satellite tags on animals, trying to understand what habitat they would use as the ice disappears.

The live data they received helped them examine how far animals could move in a week, or two weeks, or a month — and see whether it was plausible to bring a virus with them.

“What we found was, indeed, this animal movement was a potential possibility of a way a virus could move down into these other species,” she said.

Priyanka Mishra, a post-doctoral scientist in the molecular biology and biochemistry department at Simon Fraser University, said it was important to remember that the carbon stored in permafrost is also of major concern, not just potential viruses.

The established threat of climate change must remain a central focus, but humans also shouldn't be ignoring the risk of disease, she said.

“It’s impossible to predict what surprises we might find.”

Thank you for this article. We need more investigative journalism in this area. Keep them coming. :)

THis seems obvious.........as obvious as the fact that most of us won't react until its too late, and the climate caused disasters are at our doors. We worry more about an unsustainable fossil economy than we do about the living earth. Mom Nature is going to have to act as fast as she can against us, to preserve anything of her health and diversity.