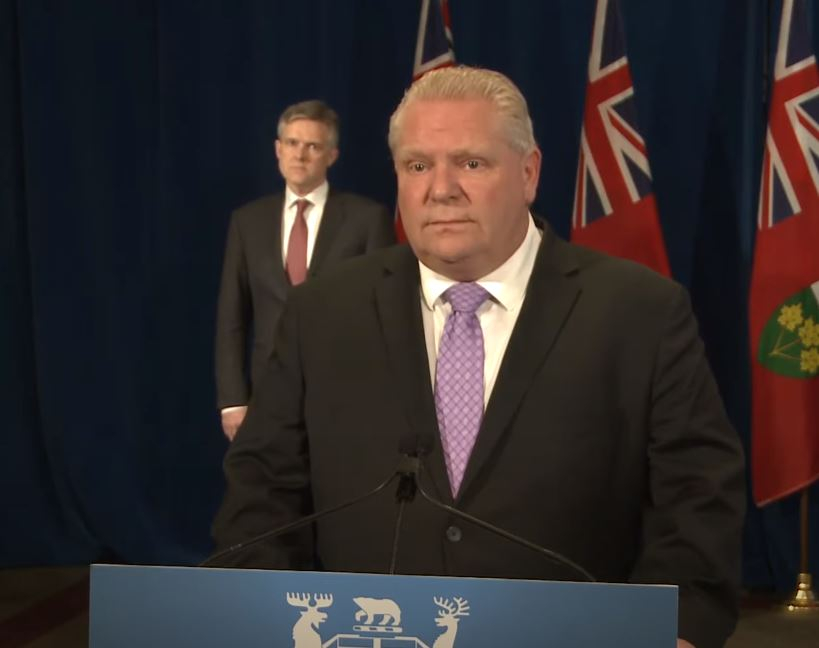 So far, a feared surge of COVID-19 cases has not overwhelmed Ontario hospitals.

But the province’s fight with the pandemic is still far from over ⁠— especially in long-term care homes, where the novel coronavirus is spreading with terrible speed despite the province’s promises to create an “iron ring” around the elderly. Now, medical workers will be redeployed to long-term care homes, and more new measures are coming Wednesday, Premier Doug Ford announced Tuesday.

“Despite our best efforts, we’re dealing with a wildfire in long-term care homes,” Ford said. “We’ll spare no expense.”

One key new measure, Ford said, is an emergency order that will require long-term care workers to only work at one facility, starting Tuesday at midnight, to stop the spread of COVID-19 between facilities. Long-term care workers often work part-time hours at multiple facilities in order to make a full income. The province will top up those workers’ part-time incomes, he added.

Critics had been calling for such a move for weeks. And hours earlier, Ontario NDP Leader Andrea Horwath had repeated the request. “Long-term care was a disaster waiting to happen,” she said, adding that it had been underfunded for a decade.

B.C. made a similar order weeks ago. However, Ontario did not follow suit, instead asking workers to disclose if they worked at multiple homes and to avoid working at multiple facilities if one of them was experiencing an outbreak.

Even before the COVID-19 pandemic, medical workers’ associations and unions had been calling for fixes to chronic staffing issues in long-term care homes. Issues in that area came to light in 2019, as part of an inquiry prompted by the serial killer Elizabeth Wettlaufer, a long-term care nurse who was convicted for murdering eight elderly patients.

Ontario has recorded 114 outbreaks in long-term care homes, Ford said Tuesday. Another 34 seniors’ homes are infected. Elderly people are particularly vulnerable to COVID-19, and about 40 per cent of Ontarians who have died from the virus are 60 and older.

The province has recorded a total of 7,953 cases, with 483 new ones reported Tuesday. Ontario’s chief medical officer, Dr. David Williams, said some of those new cases are patients who got sick after going to gatherings, against the province’s physical distancing guidelines.

However, he said, COVID-19 hospitalizations and cases in the ICU appear to be plateauing, a hopeful sign that this outbreak may indeed be peaking, as officials suggested Monday.

Ontario's fight with the pandemic is still far from over ⁠— especially in long-term care homes, where COVID-19 is spreading with terrible speed. #onpoli

“We are hoping to get a report back from our modellers on how we’re doing,” Dr. Williams said.

On Tuesday, the Ontario legislature sat for a quick afternoon session, extending the province’s state of emergency for another 28 days.

MPPs, who sat in reduced numbers so they could be properly distanced from each other, also unanimously passed the Coronavirus (COVID-19) Support and Protection Act. The bill includes a six-month pause on Ontario Student Assistance Program (OSAP) loans, and various measures to give local governments flexibility on key deadlines.

Horwath said her party had agreed to vote in favour of the measures. But she stressed that the government should be doing more, including following the lead of other provinces that have offered help to renters, and assistance for those who aren’t covered by federal assistance packages.

“People were hoping the legislation would rescue them from sleepless nights and payments they just can’t afford,” she said. “It doesn’t… This government so far appears to believe that helping people make ends meet is not their job.”

The legislature is set to convene again on May 12, to decide if the state of emergency, which allows the government to continue to shutter non-essential businesses and take other extreme steps, should be extended further.

Unlike Tuesday, that sitting will include a question period ⁠— a chance for opposition parties to question government actions and hold them to account.

Also on Tuesday, Ford said students will not be going back to school as planned on May 4, but that doesn't mean the rest of the year is cancelled. Education Minister Stephen Lecce will announce details in the days to come, Ford said.

Kind of late Dougie. You who

Kind of late Dougie. You who cut study of universal basic income, stopped forts to increase minimum hourly pay, and whose party along with Libs supported privatization of LTC and then cut inspections. You are no hero and you have blood on your hands.

too little too late on every

too little too late on every measure. ( eg. " sure, go to the states on your march break and have a good time no worries"; or: we don't need to be taking names when snow birds return and demanding they self isolate for two weeks in guarded campgrounds ( like Quebec did))

Nurses unions and NDP have been calling for home care and longterm care to return to well-funded ,not for profit for decades with the Same pay and benefits as nurses in hospitals, full time work for care givers in one facility. It' sbeen an utterly ignoredissue by the media till this MONTH No focus on decent work at decent livable wage and benefits that allow a worker to stay home when sick and not be forced to go to work with most vulnerable population. No focus on why Profit over people serves no one but the owners of those companies. Now chickens coming home to roost .
. Anyone looking into daycare running on the same profit over people's health model too??
Cannot believe the failure of MSM to even use that phrase or call on and name CEOs of these for profit companies and hold them to account for their lobbying of the Cons in CONtario. We've got an opening here to really look at what actually is good for most of us--versus a few well heeled lobbying rich folks.