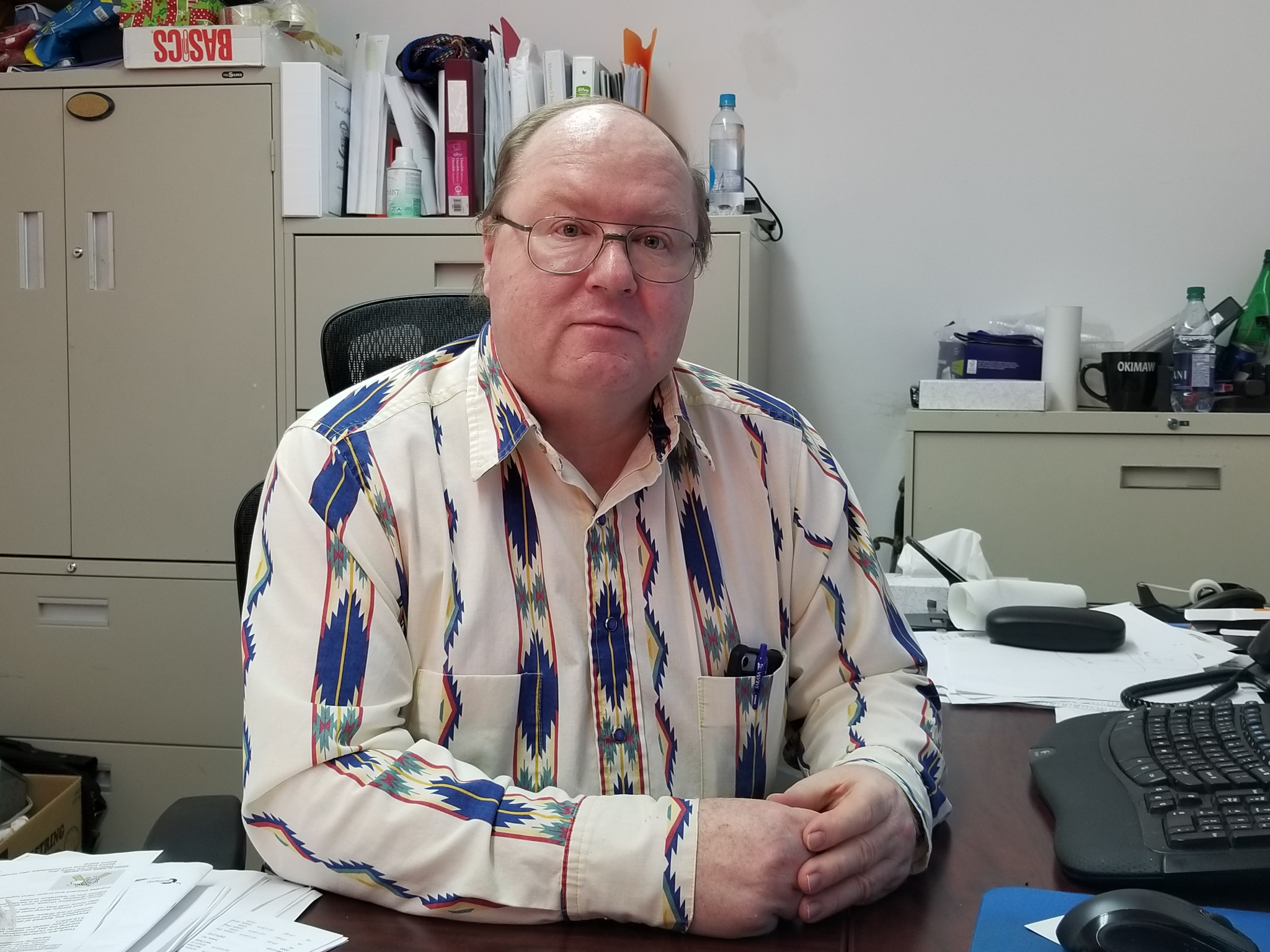 La Ronge mayor Ron Woytowich in his office at the Kikinahk Friendship Centre where he’s the executive director. Photograph by Michael Bramadat-Willcock.
Previous story
Next story

Sitting behind a desk full of paperwork, the mayor of La Ronge, Sask., is helping lead the town — and much of the Far North region — through the COVID-19 pandemic.

“I have always seen La Ronge as the capital of the North. I really have. Prince Albert calls itself that, but it isn’t. We are in the North and we are situated here. We provide a lot of services to the North,” Ron Woytowich said.

From its location in the boreal forest, La Ronge provides for the Far North region where further-away cities cannot. Prince Albert, around 240 kilometres to the south by road, is the nearest official city.

“I’m not trying to put any other communities in the North down, but this is a city the same as any city,” Woytowich said. It’s also important to the area because it has an airport, a fire department, a hospital and an RCMP detachment.

Woytowich moved to La Ronge with his wife on a short-term contract after finishing a degree in public administration at the University of Saskatchewan.

“I’m on my second career. I was a cop. Made it up as a police chief and I was done, (then) I went to university,” he said.

Today, Woytowich wears two hats. His office is in the Kikinahk Friendship Centre where he’s the executive director. Kikinahk is tied to a variety of government programs and houses a head-start pre-K program, a prenatal program, a homeless shelter and a youth program.

​​​​​The year Woytowich ran for mayor, he won, and an entirely new council was elected alongside him. “There was a feeling in the community, and at this election, I ran for mayor because I didn’t like what was happening and a whole pile of other people ran for council and we got in entirely brand new,” he said.

“It’s beautiful here. Wait till end of June or beginning of July and see all the Saskatchewan prairie lilies in the ditch. There are millions of them. You don’t see that anywhere else. We’re really a city in the North,” La Ronge mayor Ron Woytowich.

He said he’s kept taxes and municipal water prices at a reasonable rate (there is no airport tax) through planned spending he learned from his years in the non-profit sector. “We are very careful in spending. I don’t want to take the credit for it other than I’m helping push for it.

“My claim to fame is that we haven't raised taxes, which is nice because they have everywhere else and we’re still providing services.”

He considered stepping down from his role as mayor after suffering a stroke during a meeting. “I had a stroke two and a half years ago, but I was just stubborn and I wanted to prove (myself) to the doctors. What I do is I forget names. That’s part of my stroke. My wife’s name is the only one I’ve never forgotten.”

He credits his recovery to the doctor who alerted him to the stroke during the meeting and to the quality of health services in La Ronge. Woytowich doesn't know if he’ll run for mayor in the next municipal election. “It depends who you ask. My wife says no.”

Combined with the neighbouring communities of Air Ronge and Lac La Ronge, La Ronge is part of a tri-community that is the 13th-biggest population centre in the province.

Relationships between the three communities are close and they share services such as firefighting and waterworks. “We make decisions on a mutual basis based on the percentage of population. We all get along, but it’s not because we have to. We want to. We really get along good,” Woytowich said.

The COVID-19 pandemic has thrown La Ronge back into the spotlight. The last series of events of this magnitude to impact the area was the 2015 wildfires that raged through northern Saskatchewan, forcing 13,000 people to flee their homes. Then, like now, La Ronge became central to relief efforts.

“La Ronge is the drop-off point for a lot of things, which is going to scare (some people) in the community,” Woytowich said.

Testing for COVID-19 is happening and so far, no confirmed cases have been found in the community. The town council enacted social-distancing policies at its latest council meeting in March and in-person meetings are delayed until further notice.

La Ronge once had a CBC station and newspaper. The mayor said news played an integral role in keeping the community informed. He referenced the late British philosopher Thomas Hobbes. “There’s this thing of a state of nature. The state of nature is no arts, no letters, no things like that.

“The idea of losing a newspaper, it’s so important to a community … a newspaper also had all your local news and if somebody got married or won a prize, their picture was there and you made copies of it and you sent that to all your relatives and we don't have that anymore,” Woytowich said.

Although there are bears, wolves and “the odd fire,” Woytowich said La Ronge is a safe and connected place to live.

“It’s beautiful here. Wait till end of June or beginning of July and see all the Saskatchewan prairie lilies in the ditch. There are millions of them. You don’t see that anywhere else. We’re really a city in the North.”

We don’t have earthquakes. We don’t have to worry about typhoons or anything like that. It gets cold, but so what?”

Prince Albert actually calls itself the Gateway to the North. Spiritwood also has a hospital, RCMP, airport and fire department, but no national reporter, just a local paper, recently amalgamated with Shellbrook's. La Ronge is a major geographic centre for the surrounding population, but Siberia has cities with hundreds of times more peopele around the same latitude. That must provide more variety in conversation.