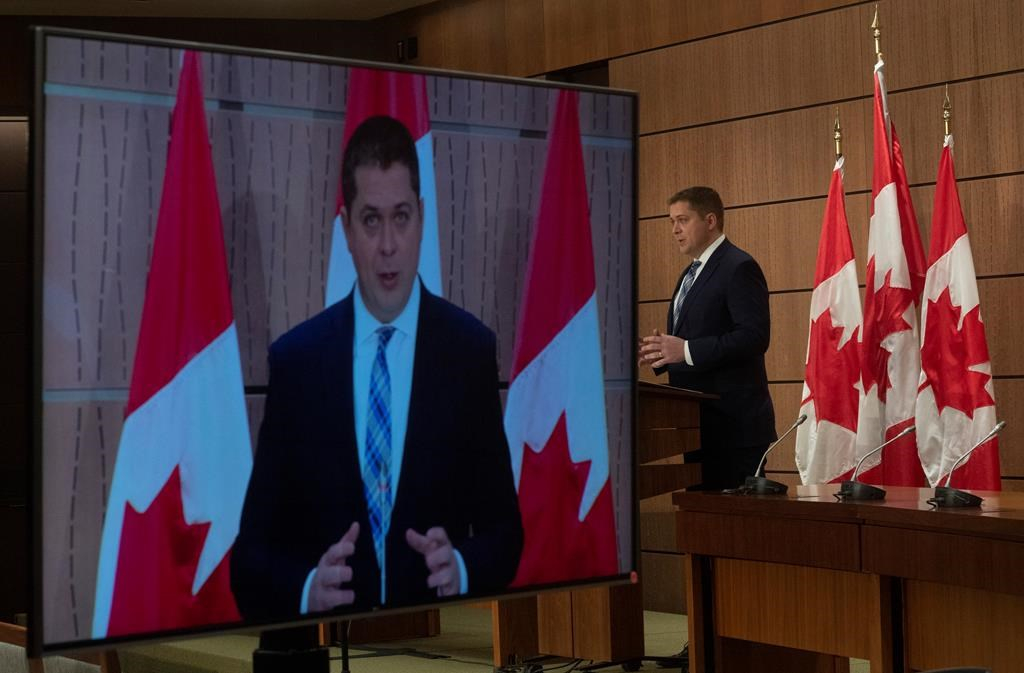 Leader of the Opposition Andrew Scheer speaks during a news conference in Ottawa, on Tuesday, April 14, 2020. Photo by The Canadian Press/Adrian Wyld
Previous story
Next story

The Conservative Opposition raised broad concerns Tuesday about the Canadian government's reliance on the World Health Organization, questioning the accuracy of its data and its relationship with China during the COVID-19 crisis.

Conservative Leader Andrew Scheer said he had "serious concerns" about the WHO during a press conference on Parliament Hill after returning from his Saskatchewan riding.

Scheer expressed disappointment that Bruce Aylward, a Canadian epidemiologist who headed a WHO mission in China earlier this year, was dropped from the witness list for a House of Commons health committee meeting on Tuesday.

The concern was echoed by Conservative committee member Matt Jeneroux, an Edmonton MP, who unleashed a blistering criticism of Aylward during the committee's videoconference meeting, saying his no-show was disappointing and unacceptable.

The officials from the departments of agriculture, industry, immigration and employment and social development were answering questions about Monday's federal announcement that it would provide $50 million to subsidize the mandatory 14-day quarantine of temporary agricultural workers from Mexico, Guatemala and Jamaica.

While there were tough questions for the government officials, there was no shortage of ire directed at Aylward, whose name appeared Monday on the committee's witness list — until it disappeared.

"I'm disappointed that World Health Organization officials have declined the invitation from the House of Commons health committee to testify," Scheer said before the meeting.

Scheer said the government is basing its decisions on fighting the COVID-19 outbreak on information from the WHO, so it needs to hear how those decisions are being made.

Scheer, Conservatives raise concerns about WHO data, relationship with China

In Washington, meanwhile, after several days of signals that the White House had the WHO in his sights, President Donald Trump pulled the trigger Tuesday, ordering an immediate halt to U.S. payments to the organization.

Trump accused the WHO of dropping the ball on assessing the threat posed by the virus in the earliest days of the outbreak in China, and of failing to gather critical intelligence in the weeks that followed.

"Had the WHO done its job to get medical experts into China to objectively assess the situation on the ground, and to call out China's lack of transparency, the outbreak could have been contained at source with very little death — very little death and certainly very little death by comparison," he told a briefing in the Rose Garden.

"This would have saved thousands of lives and avoided worldwide economic damage. Instead, the WHO willingly took China's assurances ... at face value and defended the actions of the Chinese government, even praising China for its so called transparency."

Trump claims the U.S. pays the WHO $500 million per year.

Freeland said Canada must co-operate with multilateral institutions to combat a global pandemic and that the WHO is the "international body" that does that.

"We also collaborate closely with other allies," Freeland said.

That includes Hajdu's recent meetings last week with G7 health ministers, she noted. "That's an important forum for us, and so is partnership with our allies around the world," said Freeland.

China is not a member of the G7, which is composed of the world's largest economies that are democracies.

Hajdu said Tam and other health officials have testified at length before the Commons health committee and will continue to do so in the future.

"This is an actual health crisis for Canada, and we work very hard to make sure that the opposition has an ability to ask those questions ... has the information at their fingertips when they ask for it," said Hajdu.

At Tuesday's meeting, Jeneroux noted that Tam has indeed shown up at the committee to testify.

"I want to highlight how disappointing it is that Bruce Aylward, a key adviser to the WHO, has at the last minute decided not to appear and did not offer to be rescheduled at a later date," he said. "This is unacceptable."

Jeneroux noted several "facts" that he wanted to ask Aylward about and that he has "decided not to come and hide from any accountability." In Aylward's absence, he read from a statement:

"There is simply no doubt that the WHO has been slow to recommend concrete measures that has negatively affected Canada's response to the virus.

"In fact, the WHO has gone above and beyond to congratulate and thank China for their response which has been to mislead the world on the gravity of the virus."

Jeneroux said Taiwan has managed to "flatten the curve" of the virus but the WHO won't acknowledge its accomplishments because it doesn't want to anger China, which views Taiwan as a breakaway province that belongs to it.

Taiwan's efforts to control COVID-19 are being completely disregarded by the WHO, said Jeneroux, "and by Mr. Aylward particularly."

Jeneroux said the WHO needs to answer at the committee for questionable past statements, including saying months ago that there was no evidence of "human to human" transfer of the novel coronavirus.

"In fact, Dr. Tam used Canada's legal obligation to the WHO as an excuse to not implement travel bans," said Jeneroux, adding that Tam said Canada did not want to be "called out" by the WHO for doing so.

"Our government was more fearful of being called out by the WHO than protecting Canadians," said Jeneroux.

He said that remark needs to be clarified at the committee by both the WHO and Tam.

"As the WHO continues to praise China's approach after announcing over 8,000 deaths, Taiwan is producing four million masks a day, providing them with frontline workers and consumers for their safety," he said.

"Why was China being listened to, and Taiwan being ignored?"

Do any of these concerns have

Maybe big Donald is right…is the WHO as holy as they may want us to believe….I picked the following note(yellow) from my National Observer subscription…

"There is simply no doubt that the WHO has been slow to recommend concrete measures that has negatively affected Canada's response to the virus.
"In fact, the WHO has gone above and beyond to congratulate and thank China for their response which has been to mislead the world on the gravity of the virus."
Jeneroux said Taiwan has managed to "flatten the curve" of the virus but the WHO won't acknowledge its accomplishments because it doesn't want to anger China, which views Taiwan as a breakaway province that belongs to it.
Canada maintains a "one China" policy that means it has no direct political relationship with Taiwan. But Canada does have a trade and cultural relationship with Taiwan

Is our National Public Health leader (TAM)shading her comment to suit the Canadian ONE CHINA policy ..instead of a Canadian policy….no doubt she follows our Leader’s guidance…If so, both should be fired !